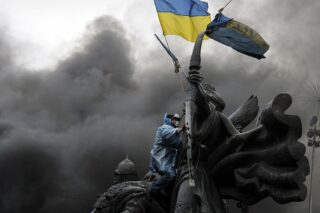 How Russia’s invasion of Ukraine can impact African economies

In the early hours of Thursday, the 24th of February, air raid sirens wailed across the streets of Ukrainian cities such as Kyiv, Kharkiv, and Odesa, after at least seven loud explosions from a military attack by Russia. The Russian attack followed a weeks-long military buildup of nearly 200,000 troops along the country’s border — a move widely speculated to precede a third World War. This invasion has become the most followed event in history, not just because of the Ukrainian lives in danger but also because of the massive ripple effect this war has on the rest of the world.

The global economy has not yet fully recovered from the shocks of the pandemic. But Russia’s invasion of Ukraine spells even more danger for it. For several weeks before the assault, tensions around this subject sent tremors into the markets, shooting up energy prices and reducing investors’ interest in risk-on assets. Last Thursday, oil briefly climbed past $100 a barrel for the first time since 2014, while European natural gas jumped as much as 62 per cent.

As Ukraine fights back, Western governments are weighing sanctions against Russia. But they’re also aware that by doing so, they could heighten the conflict’s impact on their economies. However, whether or not Western countries intervene, this war has direct or indirect implications for the world.

Africans are already feeling the heat

As in the rest of the world, the February 24 invasion casts a long shadow across Africa. Distance has not hindered the continent from having critical connections with Ukraine. One of them is that Africans make up more than 20 per cent of Ukraine’s international students, including over 8,000 Moroccans, 4,000 Nigerians and over 3500 Egyptians studying in the country.

The primary concern is the safety of these people, which African governments have so far handled with unequal sentiments. Two weeks before the incursion, Morocco’s government asked its citizens to leave Ukraine as soon as possible. About a week after, the head of the Egyptian community in Ukraine, Ali Farouk, announced that authorities in Ukraine and the Egyptian embassy were coordinating the return of Egyptian students. However, Nigerians have not experienced the same level of urgency. As of report time, many Nigerians were walking to Ukraine’s border as closed airspaces left them stranded in the country. Citizens of several other countries are also finding it hard to leave, including Zimbabweans, who have no embassy in Ukraine.

Both Russia and Ukraine play a significant role in the global agricultural market and have been among the key drivers of global food price rises since 2020. According to the International Grains Council, Russia produces about 10 per cent of global wheat while Ukraine accounts for four per cent. Combined, that almost equals the European Union’s total wheat production. In 2020, the two countries accounted for nearly 30 per cent of global wheat exports. In the same year, African countries imported agricultural products worth $4 billion from Russia and $2.9 billion from Ukraine, most of which were wheat and sunflower oil. The top importing countries were Egypt, which accounted for nearly half of the imports, followed by Sudan, Nigeria, Tanzania, Algeria, Kenya and South Africa.

But a prolonged war between these countries will disrupt both the production and trade of grains in these countries. As a result, everyone that depends on them for grain supply will have to brace for higher prices, which will lead to food inflation. Moreover, some experts have warned that a prolonged war could make Russia impose export tariffs on its wheat to improve its food security. When Russia annexed Crimea in 2014, wheat prices increased by 25 per cent over two months. Because of the current tensions, all major wheat exporters reported higher prices over the past month.

The energy sector is also another vital point of concern. As stated earlier, oil prices have already surged past $100 per barrel to hit their highest level since 2014. Oil-producing countries like Nigeria and Angola might get a revenue boost from this situation. However, Africans are likely to start paying more for transportation. This will have a knock-on effect on the prices of nearly all other products. South Africa’s automobile association already predicts that March will bring record-high fuel prices to the country. Nigeria, which has recently been embattled with a fuel crisis, is also paying heavily for petrol subsidies, and keeping fuel cheap will only become more expensive with high oil prices.

Also, low natural soil fertility is a challenge for food production in many regions. As a result, chemical fertilizers play an essential role in food security. However, high energy costs will make fertilizers more expensive, especially for smallholder farmers, which dominate the continent’s agricultural sector.

Opportunities from the crisis

Although the conflict is likely to increase household costs across the globe, it opens up long-term trade and growth opportunities for Africa. Despite several climate change initiatives, the world has not yet adopted sustainable alternatives to fossil fuels. Europe depends heavily on Russia for its energy, but this war can sponsor the need for diversification, making them potential customers for Africa’s natural gas.

Tanzania’s president, Samia Suluhu Hassan, stated in an interview on the sidelines of the European Union (EU)-African Union (AU) summit in mid-February that the tensions in Ukraine are generating growing interest in the country’s gas reserves, which are the sixth-largest in Africa.

Senegal discovered 40 trillion cubic feet of natural gas between 2014 and 2017 and expects production to start later this year. Nigeria, already a supplier of liquified natural gas (LNG) to several European countries, is also embarking with Niger and Algeria on the Trans-Saharan Gas Pipeline to increase natural gas exports to European markets. On February 16, the three countries signed an agreement to develop the pipeline, estimated to cost $13 billion.

Besides natural gas, the world needs palladium to make electronics and automobiles, of which Russia is the top producer. South Africa is the world’s second-largest producer of this metal, and sanctions on Russia can push it to the top spot.