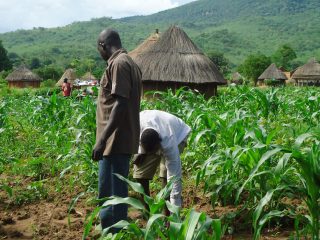 We live in a fast-paced world, and it’s getting even faster. That’s not a bad thing. However, it makes us less aware of our environment. We can’t see how much climate change is taking place right before us. We move past the subject because it does not interfere with our daily city life or has yet to interfere significantly. However, many are already suffering the negative impacts of climate change.

As the world recovers from the unsettling effects of the COVID-19 pandemic, the agricultural sector should be a beacon of hope to the 490 million Africans living in extreme poverty. But unfortunately, climate change threatens smallholder farming on the continent. According to a UN International Fund for Agricultural Development (IFAD) report, climate change could reduce staple crops by 80 per cent in eight African countries by 2050. In simple English, we will have less food if we do not address climate change.

Smallholder farmers in Africa and South Asia suffer the most from climate change, despite contributing the least to it. These farmers produce about one-third of the world’s food and up to 80 per cent in some parts of Africa and Asia. Burundi and Congo (DRC) top the list of countries with food insecurity while having near-zero carbon emissions. Today, less than two per cent of global finance supports these farmers.

In an interview with Ventures Africa, Enock Chikava, interim Director, Agricultural development at the Bill & Melinda Gates Foundation, explained the reason for this shortfall. “Africa has a lot more people involved in agriculture. More than 50 per cent of its population are into farming,” said Chikava. “For example, 92 per cent of Burundi’s population depends on agriculture; 65 per cent of Ethiopia and 42 per cent of Malawi. Compare that with Australia, where only 2.6 per cent of employment comes from agriculture, or the USA where it’s 1.4 per cent. Most funding comes from these Western countries where smallholder farming is not as widely practised.”

According to a report by Nature, 75 per cent of the climate finance has gone to projects to reduce greenhouse gas emissions. These mitigation projects should align with projects helping people adapt to climate change. The UN estimates that developing countries already need $70 billion per year to cover adaptation costs and will need $140 billion–$300 billion in 2030. “This is why we raise awareness on the centrality of agriculture”, said Chikava. “Particularly, for hundreds of millions of farmers whose lives and economies depend on agriculture. Climate change is affecting agriculture, livelihoods and economic progress. When you think like that, you’ll want to do something about it.”

When crop yields decline, food prices increase, so does hunger and poverty. This leads to increased migration, conflict and instability. Globally, one in ten people faced hunger in 2020. In Africa, the figure has risen to one in every five people. Chikava believes it has become urgent to invest in agricultural adaptation for African smallholder farmers. “Investing in smallholder farmers means providing livelihoods and nutrition for these farmers. It is urgent because climate change is no longer a future crisis, it’s a present-day reality. Growing up, we used to have one dry season every five years. Now we have one dry season every two years, and there were times we had back-to-back dry seasons for two to three years. The world is only 1°C warmer, and it has this much effect.”

According to the Bill and Melinda Gates Foundations, by 2050, areas that currently provide 70 per cent of the total value of crop production in Sub-Saharan Africa will be characterized by severe aridity and heat stress. This means farmers will have problems going to work because of health risks. As a result, most agricultural production in sub-Saharan Africa will need to adapt to increasing temperatures and aridity.

What can be done?

The UN is bringing together 120 national leaders at the COP26 climate summit, held in Glasgow from Oct. 31 to Nov. 12, to find ways to limit global warming. Towards this event, the Gates Foundation is calling for climate-smart agriculture adaptation as well as two urgent areas of action from governments and other funders: