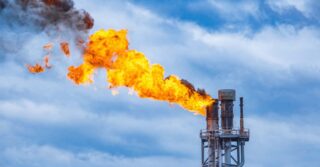 COP 26: The implications of ending global fossil fuel projects on the Nigerian economy

At the just-concluded Conference Of Parties (COP 26), 25 countries and public finance institutions announced their commitment to end finance for overseas fossil fuel energy projects by 2022. This is to ensure global transitioning to cleaner sources of energy, which is the only way to keep the global temperature from rising beyond 1.5 degrees pre-industrial level.

The commitment also has the support of five public banks, including the East African Development Bank and the European Investment Bank with a plan to mobilise $17.8 billion a year for the clean energy transition to keep 1.5°C alive. This sounds good for the fight against climate change, but it comes at a huge cost for developing nations. The African continent has an abundance of fossil fuels and natural gas that are a source of revenue for many of its countries.

Crude oil and natural gas are the lifeblood of Nigeria’s economy. Oil discovery in the 70s transformed the country from being an agrarian economy to an oil-dependent one. Presently the country is Africa’s largest oil producer and the eleventh-largest oil-producing country in the world. Because of her dependence on oil revenue, fluctuations in oil prices have a significant impact on the state of her economy. Low oil prices were a major contributing factor to the 2016 recession. Also, the oil price war between Saudi Arabia and Russia in the early days of the pandemic negatively affected the country.

With recent global developments towards ending fossil fuel by 2022, it is a safe bet that the path towards a cleaner source of energy will attract more players, and oil will gradually lose market value. This would be detrimental for a country like Nigeria trying to recover economically post-pandemic. Nigeria recently scaled through a recession in the fourth quarter of 2020, and 33.3 per cent of its citizens are unemployed. Presently, the economy is swimming in a pool of inflation, with commodity prices skyrocketing, and things could get worse.

Controversies around the transition

Nigeria has pledged to reduce carbon emissions to zero by 2060, but President Mohammadu Buhari believes that the transition to cleaner renewable energy should not be hasty. He explained that the energy solutions proposed by those most eager to address the climate crisis are a source of instability, particularly in Africa. He argues that although wind and solar energy are the most popular modern technologies, they may not serve 1.3 billion Africans efficiently because they rely on backup generators or batteries for days when there is no wind or sun for the panels.

Furthermore, the global rush for electric vehicles (EV) threatens to replace the previous century’s race for fossil fuels with a new global race for lithium for batteries. Africa, which has a large deposit of this resource, will be vulnerable to geopolitical instability. “This makes the economic migrations the U.N. warned of more likely. We must think carefully about whether our dash to terminate the use of fossil fuels so swiftly is as wise as it sounds,” he said.

Vice President Osibanjo shares similar sentiments. He noted that the aggressive decision of wealthy economies to defund fossil fuel projects is unfair considering how much profits they have made from the sector before now. He laments that policies binding these decisions often do not distinguish between different kinds of fuels, nor consider the vital role fossil fuels play in powering the growth of developing economies, especially in sub-Saharan Africa.

He argued that for countries rich in natural resources but still energy poor, such as Nigeria, the transition should not come at the expense of affordable and reliable energy for people, cities, and industry. Rather, “it must be inclusive, equitable, and just—which means preserving the right to sustainable development and poverty eradication, as enshrined in global treaties such as the 2015 Paris climate accord. Curbing natural gas investments in Africa will do little to limit carbon emissions globally but much to hurt the continent’s economic prospect.”

Change is constant. A decade ago, humans lived and interacted in a very different way than they do now. We are already seeing the effects of a changing world, with two major factors influencing the course of change – technology and climate change. Nigeria must be intentional about economic diversification if it hopes to maintain its place in the global economy and meet the needs of its burgeoning population. Initiatives geared towards diversification must not only be on paper but must also be made a reality. Although the non-oil sector has been a significant contributor to the country’s GDP, more should be done.

When an average Nigerian hears the phrase “economic diversification,” the first thing that comes to mind is a shift to agriculture. But what is often overlooked is that farming has progressed beyond the traditional hoe and cutlass method. As a result of climate change and technological advancement, so much has changed in the sector. Nigeria must pay attention to these influences if it is to benefit from the sector.

The agricultural sector is not the only sector with a promising future in the country. As recent events have demonstrated, the information and communication sector has enormous potential. Information and communication are driving growth in the non-oil sector. More could be done in this sector if the teeming young population is given the proper resources and environment.

Although the transition to cleaner energy sources appears complicated at this early stage, it is inevitable. And there is no better time than now for the country to embrace this route. And there is no better time for the country to take this path than right now. Nigeria is expected to overtake the United States of America as the third most populous country globally by 2050. As the population grows, so does the demand.