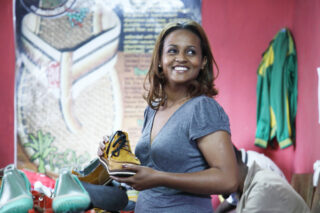 Top 5 African countries with the most fearless women entrepreneurs

It’s no longer stale news that Africa has the highest percentage of female entrepreneurs globally. The continent has witnessed significant growth in female-owned businesses across different sectors over the past decade.

One of the reasons for this trend is that a large number of African women don’t fear failure in business. This metric is important, seeing that most African countries have low Ease of doing business rankings and that 80 per cent of African businesses fail within their first five years.

A recent report by TaiwanPlus, a Taiwan-based broadcast service, titled “Women in business” showed several patterns among female entrepreneurs globally. One of them is that, on a global scale, women are less likely than men to be undeterred by fear of failure when starting a new business. But some countries are outliers of this trend, Kazakhstan leads the world in this respect, with 82.7% of women responding that failure didn’t scare them. 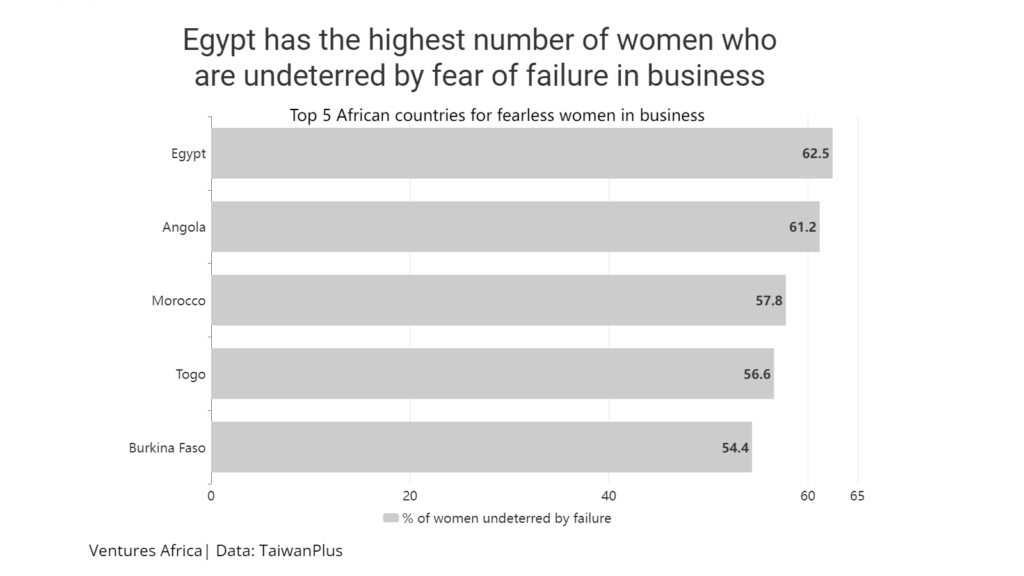 Let’s put these figures into perspective for each country:

Egypt ranks 114th out of 190 countries in the World Bank’s ease of doing business index, and only 10 per cent of startups are successful each year, according to Failory. Women, however, face more complex challenges in Egypt. For instance, women have a harder time raising finance as 57.5 per cent (pdf) of them fund their businesses with their savings. That partially explains why Egypt is not one of the top 20 countries for women-owned businesses globally.

Angola has the highest percentage of women-owned businesses globally. According to TaiwanPlus, 35 per cent of Angolan women own a business, outpacing second-placed Guatemala (24.9 per cent). Notably, only 9.9 per cent of these women own established businesses. The rest (25.1 per cent) own early-stage businesses. This shows that running a business in Angola is more about survival than about exploring opportunities. However, Angola ranks 177th out of 190 countries in the World Bank’s ease of doing business index, and four out of five businesses fail. 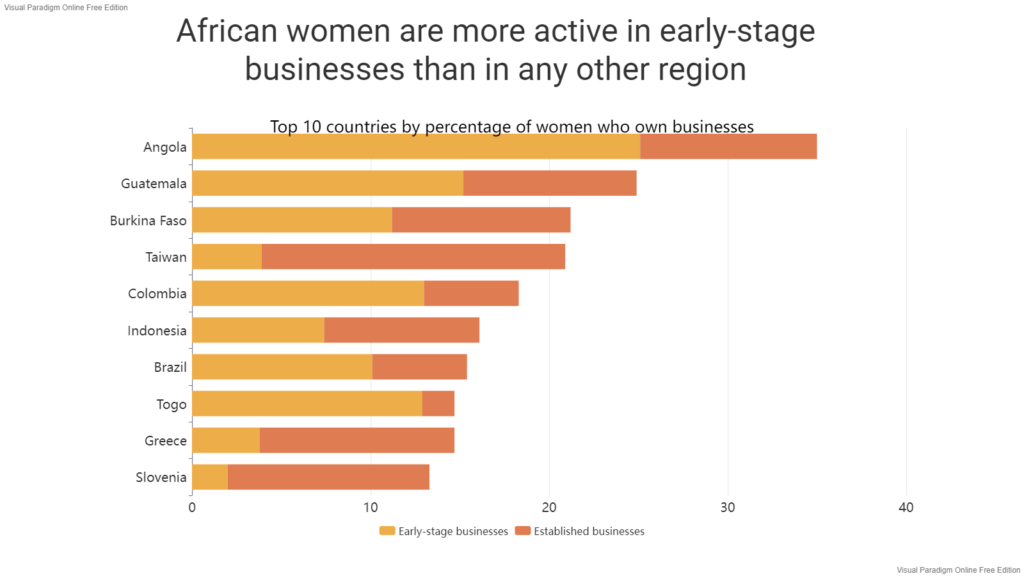 Morocco has Africa’s third-highest percentage of women who are not afraid of failing in business. But unlike in Egypt and Angola, this doesn’t look like a fight for survival. Morocco is one of Africa’s best countries for doing business, ranking 53rd out of 190 countries globally. Rather, it might have more to do with the demographic of women in business. Morocco has the world’s highest percentage of younger women (aged 18-35) entrepreneurs at 74.1 per cent.

This data is quite an improvement, seeing that in 2019, Morocco was the country with the world’s highest percentage of people admitting fear of failure would prevent them from starting a business.

Togo ranks fourth among African countries for “fearless” women in business, and 15th globally. But it ranks first globally for the percentage of “confident” women. According to data from Global Entrepreneurship Monitor, 92.6 per cent of Togolese women believe that they have the required knowledge, skills and experience to start a business. So it’s no surprise that Togo has the third-highest percentage of women-owned businesses in Africa (8th globally). Also, doing business is moderately easy in Togo, as it ranks 97th out of 190 countries in the World Bank’s ease of doing business index. However, nearly half of its population lives in extreme poverty. Hence, doing business is more about survival for most women in Togo.

Burkina Faso has the global third-highest percentage of women who own businesses. One of the reasons is that it has the world’s fourth-highest percentage of women who are confident that they have enough skill, knowledge and experience to start a business (82%). However, the country sits in the bottom quarter of the World Bank’s ease of doing business ranking at the 152nd position. And since it is one of the poorest nations in the world, starting a small business without fear of failure is necessary for survival among most women.