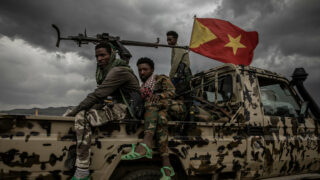 Ethiopia has lost $410 million to a war-induced internet shutdown

In 2019, Ventures Africa published a magazine titled “Why is the internet still off?” to query the rising trend of internet shutdowns across Africa. At that time, the continent averaged 15 shutdowns yearly, and Ethiopia was one of the countries under the spotlight. Now, it’s 2023, and the internet is still off in Ethiopia.

In November 2020, Ethiopia’s Tigray region entered a deadly war between Tigrayan rebels and government forces. Since then, the war has claimed up to 600,000 lives and displaced millions from their homes. But that’s not all the country has lost to the war.

Since the war started, Tigray, home to more than 5 million people, has been mostly without internet, telecommunications, and banking. And the economy has lost about $400 million to it.

A new report by Top10VPN, a London-based VPN review firm that assesses internet privacy, security, and freedom, shows that Ethiopian businesses lost $145.8 million in 2022 alone. In 2020, the country lost $100 million to its internet blackout. Then, the number rose to $164.5 million in 2021, affecting 21.3 million users.

Mekelle, the capital of Tigray, had a 22-month-long power outage because of this war. So, despite the restoration of electricity in December, the damage had been done, with many businesses shutting down and residents fleeing the town.

Ethiopia has kept an unhealthily long record of internet blackouts over the years. Since 2016, the country has shut down the internet 22 times. But in 2022, Ethiopia’s internet shutdown lasted 8760 hours (365 days), making it the world’s longest uninterrupted shutdown, according to Top10VPN.

“As in other areas of the world, the main reason authorities implement shutdowns is to stifle the free flow of information during elections, conflict, or protests. Internet shutdowns are, above all else, a method of control, but that doesn’t mean they’re always successful,” the report says.

In November, the warring sides signed a ceasefire agreement. However, the internet is still off, with no clear timeline for Tigray to get back online. “There is no timeline,” Belete Molla, Ethiopia’s innovation and technology minister,  told delegates last November during the UN annual Internet Governance Forum in Addis Ababa. So, for now, Ethiopia will keep losing money.

In all this, it’s notable that the figures TopVPN estimated might not be accurate. It used the Cost of Shutdown Tool (COST) by Netblocks, an internet monitoring NGO. And while Netblocks claims that it bases its calculations on indicators from the World Bank, ITU, Eurostat and US Census, they’re purely hypothetical.

For instance, Netblocks’ method implies that countries lose the same amount of money when any one of the biggest social platforms (Facebook, Instagram, Twitter and YouTube) gets shut down. But that theory assumes that all these platforms are equally potent, which is not a fact.

It’s difficult to track how much countries, especially in Africa, lose to internet shutdowns, primarily because no one knows how much revenue comes in when the internet stays on. However, it’s necessary to use figures like COST’s to give perspective. There is no way a region or country remains disconnected from the internet for a full year without losing a fortune.

The trend of internet gagging is taking millions of dollars from other African countries. Last year, Sudan lost $17.8 million due to the government’s continued use of internet shutdowns to crack down on pro-democracy protests since a military coup in October. “Internet access was cut twice in early January and again in June as protests were crushed and protestors killed. Internet access in Sudan was also deliberately disrupted by the government 11 times in June to prevent cheating in exams,” TopVPN’s study says.

Burkina Faso’s government also shut down the internet for 380 hours, locking out nearly 4 million people and costing the country $12.6 million. It made this move following a failed military coup, a period of unrest, and the army’s announcement that it had taken complete control of Burkina Faso.

In Algeria, a 20-hour Facebook access restriction and a four-hour partial internet outage on June 13 affected over 25 million people, costing the country $8 million.

Internet shutdowns are slowing down Africa’s growth, and unless digital freedom becomes a priority, Africa’s digital economy might not reach its desired heights.