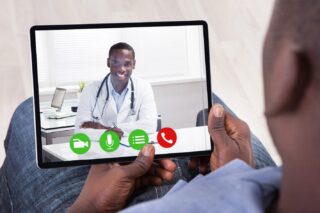 Africa is due for a telemedicine boom, but is it ready?

In one year, many things have changed in Africa, some of which we have talked about: the way we spend, the money we prefer, the exit of banks, and even the revamp of e-commerce. The after-effects of pandemic-induced lockdowns continue to linger as many disruptions are irreversible. The health sector is also a big part of Africa’s transition. More people have become aware of its importance, including investors. Health-tech startup funding surged 257.5 per cent in 2020, according to a report by Disrupt Africa. Many of the startups redefining the health sector offer telemedicine services.

Telemedicine is remote medical consultation between consumers and health professionals. Combined with direct-to-consumer distribution, it is the most common type of service offered by health innovators founded in the last five years, says a report by Salient Advisory. These companies, through tech-enabled solutions, are changing the distribution model for health products.

The World Health Organisation recommends that countries have at least four doctors per 1000 people. That’s not enough doctors for such a large number, but at least it’s not considered a crisis. But due to poor investments in the education and health sectors, 57 countries have a critical deficit of 2.4 million doctors and nurses. WHO also says that 5.9 million more nurses are needed to meet global demand, and almost 90 per cent of that shortage affects low and middle-income countries in Africa and South-East Asia. In short, we don’t have enough medical practitioners to attend to every African.

Despite this supply shortage, many medical practitioners are still unemployed or underemployed. In 2019, a staggering 40 per cent of Nigerian doctors were unemployed. Most African countries do not invest in their health sectors enough to absorb medical talent. The active health workers are also underpaid, earning less than $100 in some countries. Consequently, many health workers move out of the continent, as there is high global demand for their skills.

The United Kingdom is one of the biggest recipients of African nurses. Between 2000 and 2009, it issued over 70,000 work permits. Foreigners make up 14 per cent of the UK National Health Services (NHS) staff. In September 2021, the Kenyan and UK governments signed an agreement to allow qualified, unemployed Kenyan nurses to work for the NHS starting in October 2021, and over 3000 have thus far indicated interest. There are estimates that between 2016 and 2020, over 4,500 doctors migrated from Nigeria to the UK.

The World Bank also confirms that in 2018 alone, 1,451 Nigerian doctors migrated to the UK. According to the Center for Global Development, Liberia, Angola, and Mozambique have more doctors working in foreign countries than in their home countries. And one in every eight nurses currently lives outside the countries where they were born or trained.

Asides from low pay for health workers, the poor state of health infrastructure discourages them. For instance, in Nigeria, there have been cases of doctors using phone torches during surgical operations.

The rise of telemedicine

Telemedicine is not necessarily as new as it sounds. Medical practitioners have been using telephones to provide medical services since the 1800s. And from telephones to radio programs offering medical consultations. Today, more advanced telecommunication methods such as live video conferencing have been incorporated. Patients can now visit doctors remotely using virtual calling applications and receive their medical information on their mobile phones. This method means that even if a doctor decides to migrate to Canada or the UK, you can still employ their services. This way, Africans can still benefit from the medical personnel who have migrated from their countries.

There are several levels to telemedicine provision. One of them is when the patient communicates their health needs to the doctor directly. The doctor can recommend medication to the patient or refer them for tests in an actual health centre. Another level is where the patient has done some tests and reaches out to the doctor to interpret the test and recommend medication. The third level is where a doctor consults another doctor, usually more experienced, for guidance on treating a patient. This practice is common in teaching hospitals or tertiary hospitals when the doctors are undergoing complex surgeries.

Several African startups have adopted one or more of these levels of telemedicine, like Vezeeta, an Egyptian doctor appointment booking startup. Vezeeta fast-tracked the rollout of home-visit solutions, teleconsultation and online pharmacies across Egypt and Saudi Arabia last year. Quro Medical, a South Africa startup, also offers home care complemented by telemedicine service. Rocket Health, with a presence in Uganda and Kenya, offers consultation, pharmacy and lab services electronically and through a USSD service, making these services accessible to people without internet connection. Then there is Ubenwa, a Nigerian startup that uses artificial intelligence and machine learning to analyse a baby’s cries and detect child-birth asphyxiation, a significant cause of child mortality.

Africa needs telemedicine. This wave of innovation is potent to revamping the health sector, but there are numerous roadblocks to overcome. One of them is that there is barely any regulation for it in African countries. An absence of clear rules implies that governments are not yet paying attention. As a result, no one knows whether they are building a product that a policy will wipe out later.

The absence of laws also means there is no public register to confirm the status of the physicians. So, people might fall victim to quack doctors or doctors with revoked licenses.

Africa’s infrastructural weakness also questions its readiness for telemedicine. A large number of Africans still live in rural areas, which rarely benefit from infrastructural development. As a result, internet penetration is still very low in Africa. As of December 2020, internet penetration was at 43 per cent, meaning about six out of 10 Africans were not using the web. Simple phone calls and text messages will do for some consultations, but not all.

Closely related is the inability of healthcare professionals to use the devices required to carry out telemedicine in these countries. A study about telemedicine adoption in Africa revealed that many long-serving healthcare professionals were unfamiliar with using phones and communication technology to consult with patients, which prevented them from adopting it. But whether they choose video conferencing, phone calls or text messaging, they have to pay. Unfortunately, many Africans still see frequent phone calls and text messaging as expensive as 36 per cent of the continent lives in extreme poverty.

A more critical hindrance is the communication asymmetry between the patient and the doctor. The patients might struggle to communicate how they feel and how well they are responding to treatments. Some even deliberately hold back information out of fear of the prescription cost. Also, high illiteracy rates across African countries can make communication difficult. Connecting patients with doctors from different regions is a great idea, but they need to understand each other’s languages.

Finally, telemedicine also needs payment structures. But financial inclusion is still very low in many African countries, so many patients don’t even have bank accounts. Payment solutions such as MTN’s MoMo and mPesa might solve this locally, but they do not cater for cross-border payments.