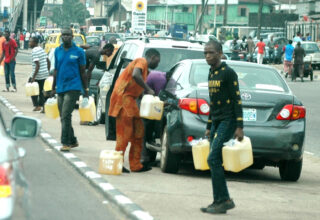 What is causing fuel scarcity in Nigeria?

Nigerians are not strangers to fuel scarcity. It has almost become a ritual. At least once a year, they endure long queues at filling stations or buy at higher prices at black markets. And December is one of the likeliest times they’ll have this experience. People spend a sizeable portion of their holiday hustling for fuel at filling stations.

However, this year is different. The country is going through its third wave of nationwide fuel scarcity in one year. And that excludes the pockets of scarcity experienced in parts of the country at different times. For instance, Port Harcourt, the capital of Rivers State, had an episode in September due to a protest by petrol tankers. Abuja has also been dealing with fuel scarcity since early October because of the flooding along the supply-chain route. But those are not the main events.

The first wave happened in February when the NNPC, Nigeria’s sole petrol importer, imported adulterated petrol. The second one came in June when petrol transporters stopped transporting petrol to parts of the country due to diesel prices. The latest one is happening because securing vessels to transport fuel has been challenging.

But all these waves of scarcity are consequences of broader problems the country hasn’t solved.

Subsidy: between the devil and the deep blue sea

Now more than ever, Nigeria’s petrol scarcity shows how its policies are often stuck between a rock and a hard place. Fuel subsidy, which has played a part in all three waves, is an unavoidable complication for Nigeria’s policymakers. Subsidies are supposedly bad for the economy, but the alternative looks like an economic disaster.

European countries refine most of Nigeria’s petrol since its refineries don’t work. And because of subsidies, it’s not profitable for private companies to import the fuel to Nigeria. So since 2017, the NNPC has been the only one carrying that burden. That’s how Nigeria has cushioned its citizens from sudden spikes in energy prices.

The first problem with this policy is that the country can’t afford it. This year, Nigeria’s projected spending on fuel subsidy is $15.7 billion. That’s much more than all 36 states spent in 2021 ($9.8 billion). So a large chunk of the country’s debt burden comes from this expenditure. More so, it leaves room for arbitrage and corruption and ultimately favours the rich instead of the poor.

But at the same time, this fuel crisis shows how subsidy removal might be a ticking bomb. Nigerians are currently too vulnerable to price shocks, grappling with gravity-defying inflation and multidimensional poverty. And because Nigeria’s electricity supply is unreliable, people need petrol as an alternative energy source to power their homes and run their businesses.

In 2014, the World Bank estimated that 70% of Nigerian firms used generators, which were responsible for 59% of the power generated by SMEs in the country. There isn’t any recent data on generator usage, but the long queues at filling stations show that generator dependency is still high.

Yeah, you read that right. Nigeria’s fuel scarcity is caused by scarcity. There is more than one meaning to this, but I’ll start with the simplest one. When marketers expect scarcity, their response is often to create it. So they hoard whatever they have in stock until they know whether or not their worries are correct.

One of the lingering fears is the imminent subsidy removal. The fact that Nigeria plans to stop paying for subsidies next year poses a lot of uncertainty and can cause artificial scarcity across markets.

The other, slightly more complicated meaning is that everyone in Nigeria is paying for diesel scarcity. The vessels that carry petrol from the ships to marine depots run on diesel. The depots constantly rely on diesel for electricity. Tankers that carry petrol from depots to petrol stations run on diesel. Without diesel, there won’t be petrol. So when diesel prices jumped from N288/litre in January to N790/litre in September (thanks to Russia and Ukraine), while petrol prices barely changed, it was surely going to be a problem. Someone has to pay for all that diesel. And now, the market is creating petrol scarcity to ensure they get their money. If the government doesn’t increase petrol prices (which is what they want), they’ll keep selling at inflated rates to the consumers.

Proudly sponsored by the NNPC

In the middle of everything, we can’t leave out the elephant in the room — NNPC. Remember, it’s the sole importer of Nigeria’s petrol. Nigeria would probably not be going through this episode if the NNPC was more productive. Here’s how it’s sponsoring petrol scarcity.

First, NNPC doesn’t buy petrol with cash. It pays with crude oil, and it’s not happening for a good reason. This swap deal called the “direct sale of crude, direct purchase of petrol” (DSDP), started because the NNPC was delaying payments to international petrol suppliers. So these companies opted to receive crude oil instead. And even at that, they insisted that the NNPC pays its crude before getting petrol. This system worked until this year when Nigeria’s oil production became abysmal. Now the country produces a lot less than 1 million barrels of crude oil daily. So it has been difficult for the NNPC to meet its end of the swap deals.

The NNPC’s solution was to make deals with more local players, opting to supply crude oil three months (yes, three whole months) after receiving petrol. And in exchange for their patience, the companies will get a higher premium of $22 per metric ton of petrol, compared to $10 per metric ton under the swap deals.

This system hasn’t worked so well. The NNPC now spends most or even all its revenue on subsidies. It spent 100% and over 95% of its revenues on subsidies in July and August 2022, respectively. Even worse, it hasn’t remitted a dime to the government this year.

And there’s no way we won’t mention it again that the NNPC once caused petrol scarcity because of poor quality control. Importing petrol with high methanol did not just cause nationwide paucity but also endangered many lives.

Nigeria’s subsidy plan is not working, the NNPC’s swap deals won’t cut it, and petrol prices are no longer uniform across the country. Relieving Nigeria from the scarcity cycle has become more challenging than ever. Whoever takes on the job of leading the country after its forthcoming elections will need to roll up their sleeves for a tough job.