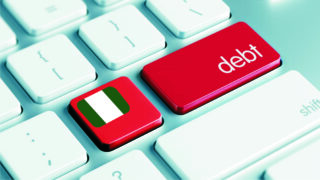 Nigeria’s borrowing plans are at risk

Nigeria’s economy has been in the spotlight for several reasons in the past few years. And one of the most controversial is its record-high borrowing trend.

According to the Medium Term Expenditure Framework (MTEF), Nigeria plans to borrow more than ₦11 trillion next year to cover its budget deficit. That’s about 5 per cent of its GDP—higher than the 3 per cent threshold set by the fiscal responsibility act of 2007. But now, it faces the uphill task of plugging this large monetary gap.

Eurobonds are a vital ingredient in Nigeria’s debt leverage plan. But as of September 23, the yield on Nigeria’s latest $1.25 billion Eurobond had risen by more than 500 basis points to 13.695 per cent from its March debut of 8.375 per cent. This Eurobond is now trading at a discount of 43.95 per cent, the most since July. 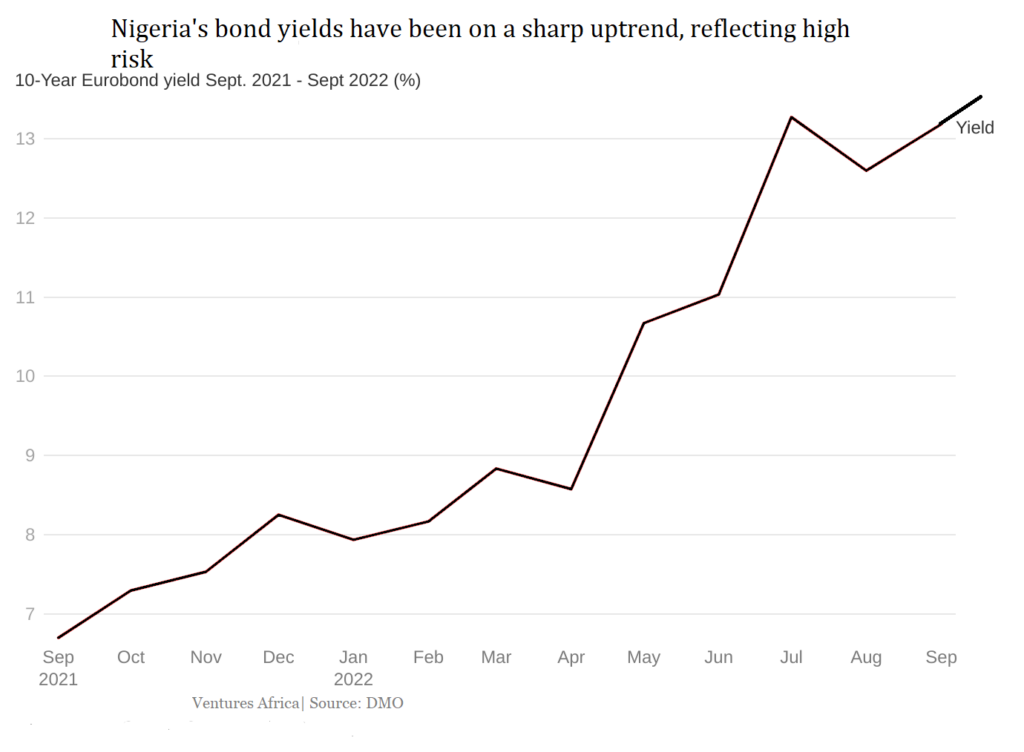 This yield hike makes it more difficult for Nigeria to issue a new Eurobond, as the government will have to pay no less than 14 per cent interest on this one.

Why is this a problem?

Eurobonds are popular in several African countries, including Nigeria. These countries typically have a high borrowing appetite for funding large-scale government projects such as infrastructure. Eurobonds provide them with an alternative medium of credit to foreign aid and traditional multilateral institutions.

However, global interest rates have risen, causing investors to take their capital to developed (less risky) markets. In the United States, interest rates have reached a 14-year high, and policymakers are signalling further hikes this year. Notably, it’s not the first time. When global economic downturns like this happen, Nigeria often gets less investment. 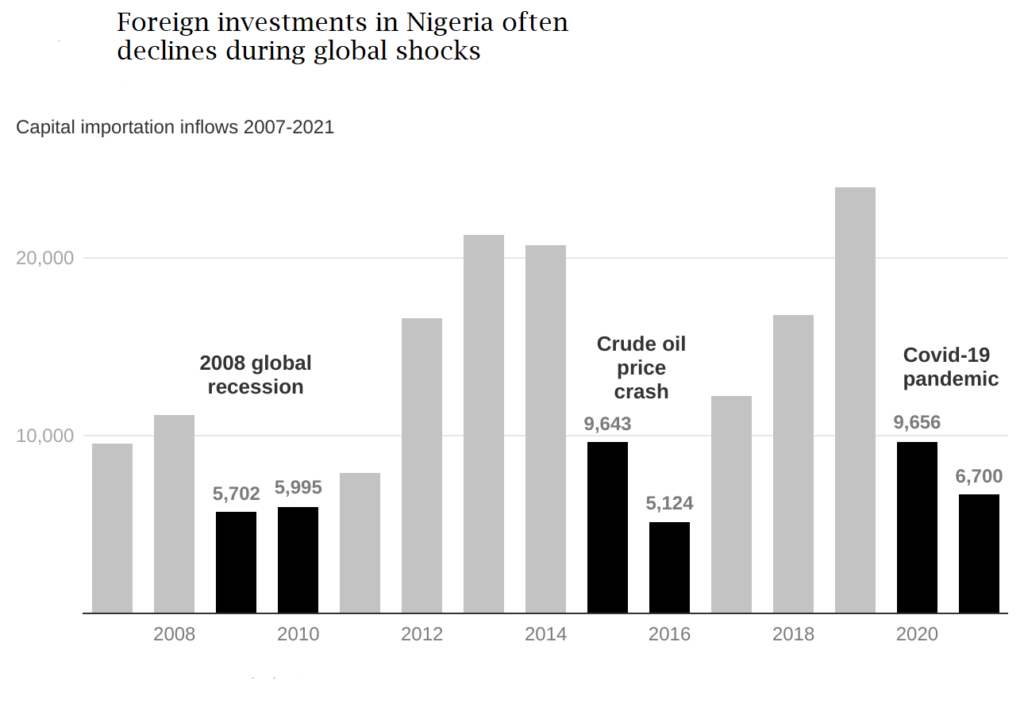 Nigeria’s credit risk rating was predicted to worsen in the S&P’s 2022 credit risk ratings outlook for emerging markets for Europe, the Middle East, and Africa (EMEA). The report stated, “We could lower the ratings if we saw increasing risks to Nigeria’s capacity to repay commercial obligations, either because of declining external liquidity or a continued reduction in fiscal flexibility. This could occur, for instance, if we see significantly higher fiscal deficits, debt-servicing needs, and significantly reduced foreign exchange reserves.”

Nigeria doesn’t need Eurobonds to only plug its budget hole. It also wants to supplement its depleting foreign reserve. Nigeria earns most of its foreign exchange through the oil sector. But it recently lost its oil giant status to vandalism and mismanagement.

At the same time, foreign exchange inflow from portfolio investors (FPI) has reached historic lows. Recent data from the National Bureau of Statistics reveal that Nigeria received $1.53 billion in FPIs in the first half of 2021 compared to $4.69 billion and $8.6 billion in the same period back in 2020 and 2019, respectively.

Investors are having a hard time trusting the country with their capital, seeing that Nigeria’s crude oil revenue is highly volatile. Even though crude oil exploration accounts for about 7 per cent of the country’s GDP, the country enters a recession whenever crude oil prices fall sharply. It happened in 2016 when crude prices crashed to $50 from over $100 in previous years and in 2020 when oil traded negative.

“Though Nigeria must finance it’s budget deficit, an aggressive approach to sourcing via Eurobonds may not be the most optimal in the near term until the economy picks up either locally or internationally,” Faloye Mopejuola, Group Treasury Manager, Oando PLC told Ventures Africa.

How will Nigeria cope?

Nigeria’s debt servicing to revenue ratio stands at over 100%, and its government is making little to no effort to change this. In the budget for 2023, the amounts the government budgeted for fuel subsidy (₦6.7 trillion) and debt servicing (₦6.4 trillion) are higher than the expected revenue (₦6.3 trillion). “Historically, the country has been spending its way out of recession from local and international borrowings, resulting in higher new public debt and historical debt service,” said Faloye.

So, next year, after removing fuel subsidies, the government will only earn ₦370 billion from crude oil and spend the rest of its income servicing its debt. The rest of the budget (including salaries) would need to come from new loans.

“Considering the 75% budgeted increase in debt service from 2022 to 2023, it will be difficult for the economy to shy away from aggressively funding the deficit either from local and or international sources, otherwise, it may potentially default on some of its obligations,” Faloye said.

Also, raising money from local creditors may not ease Nigeria’s worries because the central bank has raised the benchmark interest rates to 15.5 per cent.

But even though Nigeria has apparent liquidity and spending problems, it will likely still find creditors. The reason is that it still has oil, as low as its current production. So creditors/investors know Nigeria still has the potential to make money that outsizes its current crisis. The only problem is that Nigeria may need them sooner than they’ll be ready to arrive. “It is potentially an opportunity for institutional investors willing to diversify their portfolios into emerging markets for long tenors, so short-term and/active investors are unlikely to participate in the near term,” Faloye said.