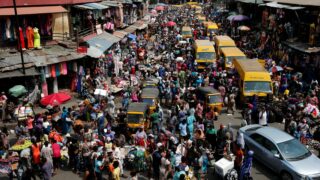 Why does Nigeria’s inflation defy gravity?

Three things are certain in Nigeria: death, taxes, and ever-rising inflation. The average Nigerian is unsure about several things—their power supply, safety, and even school resumption. But barely anyone doubts that the prices they see today will soon rise because the law of gravity—what goes up must come down—applies to everything but prices in Nigeria.

Every time the NBS publishes inflation figures, we get more proof that prices for goods and services are not just rising but also at a faster rate. The country’s most recent inflation numbers are at a 17-year high. According to the most recent inflation report, Nigerians paid 19.64 per cent more for goods and services in July than they did in the same month last year. That means Nigeria has now had six consecutive months of increasing inflation. For context, if annual inflation is 5%, the value of a currency halves every 15 years; if inflation is 10%, the value of the currency halves every eight years; but at the current rates, it takes only three years to lose half of a currency’s value. And while it appears that Nigerians have mastered the art of adjusting to higher prices, they’re paying several not-so-hidden costs.

One of the consequences of this menace is that there’s now a growing population of malnourished people. The Food and Agriculture Organisation (FAO) found over 14 million Nigerians going through critical food and nutrition crises earlier this year and projected a surge to 18 million in a few months. Another report claims that most Nigerians now spend 85 per cent of their earnings on food.

It’s safe to say inflation has become a national emergency that somehow hasn’t gained enough attention. But tackling the problem requires us first to understand why Nigeria’s inflation always rises. And for that, we need both a global and a local perspective.

A global perspective: Inflation is everywhere.

Firstly, inflation is happening globally, not only in Nigeria. A report by Pew Research shows that rates have doubled in 37 out of 44 surveyed countries. Commodity price increases, from energy to food, have fueled inflationary pressures and shook several economies. Experts expect global inflation to rise to 7.4% this year, up from 4.7% in 2021. According to the FAO, the global food price index (which measures the monthly change in the international price of food items) averaged 154.7 points in June, 23% higher than the 125.3 points recorded in June 2021. In June, the US recorded its highest inflation (9.1%) in four decades.

So yes, everyone is feeling the pinch. However, in countries like Nigeria, the impact is more forceful. The reason is that poorer households spend a more oversized portion of their incomes on necessities—food, housing, and transportation. Inflation might cause wealthier people to cut down on convenience and luxury spending, but the poor withdraw their children from school and even skip meals. That’s why Sub-Saharan Africa is the only region where out-of-school children keep increasing, and Nigeria, where over 40% of the population lives below the poverty line, is one of the top three countries globally with out-of-school children. So, the problem for Nigerians is not simply that there’s global inflation — but that income levels can’t keep up.

A local perspective: Nigeria is inflating itself.

While it’s true that there’s global inflation, it’s not the sole cause of Nigeria’s inflation. It’s even arguable that if there were no inflation in any other country, Nigeria would still have it.

In 2020, every country cited the pandemic as the cause of their economic downturns. Some bodies even stated that African economies were the most affected by COVID-19. But Nigeria’s inflation woes started with neither COVID-19 nor the Russia-Ukraine war; Nigeria spearheaded its inflation problems. How do we know this? Nigeria has been experiencing double-digit inflation consistently since 2016.

Between 2017 and 2019, 19% of Nigerian households reported experiencing a price shock for a major food item. Following the pandemic, that percentage increased to 90% by June 2020.

In July 2020, 70% of households responded to high food prices by consuming less food. According to the NBS reports on COVID-19, only 30% of households could rely on savings.

Food and energy are often the biggest drivers of inflation in Nigeria, which is ironic since Nigeria is one of Africa’s largest oil producers and seventh largest agriculture hub. It’s not difficult to process this contradiction, though. These stats become less impressive when you see the counter-facts: Nigeria has three state-owned refineries, but none is functioning; and the agricultural sector, which employs the most people, records over 50% post-harvest losses.

There are no formal structures in Nigeria’s food and agriculture sector. The NBS estimated that 92% of the agriculture sector was informal in 2015. As a result, there is no proper pricing mechanism or decision-making, so farmers are often free to change prices depending on their costs and expectations.

“The food production value chain is faulty,” said Gbemisola Alonge, Macro-economist and Senior Development Analyst at Stears. “After production, storage is a big issue. We do not have many storage facilities. For example, the Zakibian market in Benue state sells and produces over a million yam tubers but has a storage capacity of only two hundred thousand yams. Tomatoes are more perishable goods than yams. The World Bank estimated that about 76% of tomatoes get wasted when produced due to lack of storage.”

A report by SBM Intel also states that 47% of farmers have no access to any storage facility during harvest. So it’s clear that Nigeria has been in an endless loop of high production and little product.

Through policies, Nigeria has also steered itself into a rabbit hole of imported inflation. Let’s put that into context: Nigeria is a very import-dependent country — a primary reason for the naira’s weakness. Seeking to strip that label, the Buhari-led administration shut the country’s borders to the import of cereals like rice and maize, Nigeria’s most consumed staples. The central bank also stopped giving forex for wheat and sugar imports last year.

However, local production was far from sufficient to meet up with demand. Hence, local rice became more expensive, and imported rice was still getting smuggled and bought at much higher prices.

More so, Nigeria’s insecurity problem is keeping many farmers away from work. It’s not just the farmers: data from NBS shows that the capital imported into the agriculture sector in the first quarter of 2022 declined by 99.3% to $1.76 million from $237.83 million in 2021.

Why is it so hard for prices to go down?

Most of the time, we have an explanation when prices go up. We can easily say: “It’s the dollar,” “it’s fuel,” or “it’s the war in Ukraine.” However, when those economic tensions ease, prices often don’t go down. And if they ever do, it takes a very long time. In that phase, there aren’t many great explanations in the marketplace, even though everyone wonders what’s so hard about taking prices back to “normal.” Economists call it price stickiness. It is when prices refuse to fall or rise as quickly as they should, i.e., prices resist changes in demand or supply. What happens is that the cost of the good or service increases and stays that way (sticks there) regardless of demand and supply changes.

Prices get “sticky” for several reasons. One is that traders don’t continuously adjust prices as quickly as economic shocks affect the economy. They often play the waiting game: sell their expensive stock, see if competitors drop prices, etc. Another reason is that even when economic conditions change, producers might still deal with high input costs. So if fuel becomes cheaper, but wheat and sugar are still expensive, a bread maker can’t bring his price down.

But price stickiness is not the biggest reason for Nigeria’s persistent inflation. Arguably, the most salient cause of inflation is inflation. You read that right. Inflation causes inflation, especially in developing countries. I’ll make it simpler: prices often go up because people expect them to. When people get used to seeing prices go up, they expect it to happen, even when there’s no reason. This mental conditioning is more common than you think. The IMF once surveyed 53 developing countries from 1964 to 1998 to determine their fundamental causes of inflation. It found something “especially remarkable”: over 70% of inflation movements were because of expected inflation. Exchange rates accounted for up to 14%, while faster economic growth or higher demand had little effect.

“When sellers think that the price is going to increase, they increase their prices. Almost like a self-fulling prophecy, the former takes the lead,” Alonge said.

Ending Nigeria’s inflation spell is no easy feat. And so far, it appears the CBN is the only one taking active steps to curb it. That’s why we’ve seen it raise interest rates twice this year. But it’s unrealistic to expect the bank to control inflation at the broader level. On the contrary, it needs to intervene much less than it has done lately. When or if Nigeria would ever stop having inflation is still unknown. Bringing down prices is like trying to control gravity.