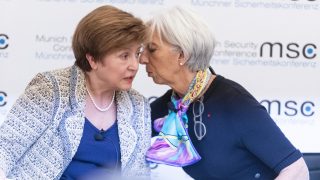 After a lot of speculation over who would take over as the new Managing Director of the International Monetary Fund (IMF), the 24-member Executive Board of the fund has selected Bulgarian economist, Kristalina Georgieva to replace outgoing Christine Lagarde.

Lagarde who led the organization for about 8 years, is now set to head the European Central Bank (ECB). Meanwhile, Georgieva will become the 12th MD since the fund’s inception in 1944, has held numerous senior European Commission positions.

At the Commission, Georgieva served as Vice President for Budget and Human Resources, overseeing the European Union’s €161 billion budget and 33,000 staff members. She also contributed immensely to shaping the agenda of the Union and was at the forefront of promoting sound economic policies, sustainable development, gender equality and poverty reduction.

In addition to being an economist with a wide knowledge of emerging market countries, the new elect joined the World Bank as an environmental economist in 1993 before progressing to being the Bank’s Country Director for the Russian Federation between 2004 and 2007.

However, she pointed out that the fund should not lose sight of the long-term objective – to support sound monetary, fiscal and structural policies to build stronger economies and improve people’s lives. “This means also dealing with issues like inequalities, climate risks and rapid technological change,” her statement reads.

Georgieva also affirms that she is a strong believer of the IMF’s role in ensuring the financial stability of economies through international cooperation, and is keen about driving that cause.

Another area of focus for the incoming MD will be to strengthen the financial system of the fund. “For our readiness to act, safeguarding the Fund’s financial strength is essential, and so are enhancing its surveillance and capacity development efforts.”

Georgieva added that she looks forward to “working with all our 189-member countries.” Her five-year term is set to take effect from October 1 2019.