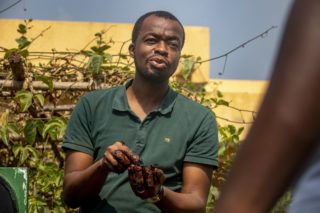 Seven notable innovations in Africa in 2021

When Marvel released Black Panther in 2018, it did more than just entertain. “Wakanda Forever” became a slogan for Africans everywhere to embrace their identity. Vibranium represented Africa’s rich mineral resource. But even more importantly, it showed the world that Africa was also home to brilliant innovators. It has become necessary to represent Africa beyond the stereotype of hunger and poverty. At Ventures Africa, this is one of our most important assignments.

It’s no longer debatable that Africa’s tech industry is promising. The rapid growth of digital skills in the continent is poised to accelerate as it is now home to 643 innovation hubs. Investors are more bullish than ever on the sector, as VC fundings reached a record-high this year. However, challenges slacken the sector’s growth.

According to a report by CryptoInvest, the internet penetration rate in Africa is the lowest in the world. The continent is still five years away from having a 4G connection. Like many other challenges, this is an infrastructural problem. Most of the continent’s internet is by low-speed dial-up connections, concentrated in Egypt, Kenya, and South Africa. According to the Speedtest Global Index, the average mobile download speed globally was 30.89 Mbps in April 2020, while the same for fixed broadband was 74.74 Mbps. In Africa, the highest mobile download speed was in Morocco, at 30.88 Mbps. The highest for fixed broadband was in South Africa at 33.14 Mbps. That’s not all. The report also shows that Sub-Saharan Africa has the highest internet prices in the world. In part, this is an infrastructure problem. But it is also due to a lack of competition in the data space.

African governments are not doing enough to speed up internet penetration, and tech giants are now taking up the job. Huawei built around 50 per cent of Africa’s 3G networks and 70 per cent of its 4G networks. Instead of speeding up growth, African governments are slowing it down. Several African countries are still under dictatorships, including Sudan, Zimbabwe, and Chad. As a result, internet shutdowns are still common. This year, the Nigerian government restricted access to Twitter for its citizens. Today, Nigerian residents can only access the microblogging site through Virtual Private Networks (VPNs).

Africa’s education sector still has a mountain to climb. According to Statista, 34.7 per cent of adults (15 years and older) in Sub-Saharan Africa can neither read nor write. Also, there is still a lot of low-quality teaching and learning in African education programs as well as inequalities and exclusion at all levels.

Despite these challenges, notable innovations still come out from Africa. Innovators defy the odds to prove that technology is Africa’s diamond in the rough and is worthy of the world’s attention. We have selected innovations from all over Africa with notable impacts that have the potential to compete globally.

Reeddi’s self-study reveals that businesses and individuals in Nigeria spend more than 40 per cent of daily expenses on self-generated electricity. Olubanjo tackles this problem by creating a compact and portable solar-powered battery that people can rent at lower prices. With Reeddi’s battery, businesses spend less than 10 per cent on electricity.

Currently, 600 households and businesses in Lagos use the product every month. The company plans to expand further in Nigeria before taking the products to other nations in Africa and Southeast Asia.

Africa holds more than 60 per cent of the world’s uncultivated arable land. However, the continent still has a low share in global agricultural production. Several factors contribute to Africa’s low productivity, including post-harvest loss. Agricultural productivity is difficult because smallholder farmers dominate the sector, contributing up to 70 per cent of the continent’s food supply. These smallholder farmers are mostly poor as they lose most of their produce before sale.

In Côte D’Ivoire, Noel N’guessan’s home country, post-harvest waste accounts for two to five times the amount of crops sold. To put this plethora of waste to use, N’guessan developed Kubeko — a set of low-cost biowaste processing equipment. Both the Kubeko composter and the Kubeko biogas system produce fertilizers. So rather than buy fertilizers, farmers can buy Kubeko equipment and make theirs.

We seem to discuss more on how much money was lost to the pandemic than how many lives it took. As of September 30, 2021, deaths from coronavirus (COVID-19) in Africa reached 211,853. Vaccines are being rolled out globally, but most African countries are lagging, leaving most people exposed. According to the World Health Organization (WHO), six in seven COVID-19 infections go undetected in Africa. As a result, most people still need to wear masks to stay safe despite the return of economic activities.

Dr Joseph Nderitu, a Kenyan scientist and doctor at Kenyatta National Hospital, noticed problems with the masks in the market. Most of them were substandard and even caused allergic reactions. Health workers weren’t spared; those who doubled their masks still got infected. Using nanotechnology, Nderitu created Nano Mask — a reusable surgical mask that kills viruses on contact. Users of this mask need no longer worry about allergic reactions or about microbes breaking into their airways.

There isn’t much room for people with disabilities in our world today. They struggle with both locomotion and acceptance. Consequently, they need efficient ways to underprop, and this is why prosthetics exist. However, getting prosthetics is difficult for amputees in Africa. The World Health Organization estimates that there are 30 million people with amputated limbs in poor countries, and only 5 per cent of them have access to prosthetics.

For Mohamed Dhaouafi, this problem hit close to home. His friend’s cousin was born without upper limbs and couldn’t afford prosthetics. This inspired Mohamed to research limb loss around the world. His research then birthed his company, CURE.

Mohamed, a 2017 Tony Elumelu Foundation Alumna from Tunisia, established two main programmes to solve this problem. CURE prints 3D bionic hands for the poor and teaches those with limited resources to use their new limbs through virtual reality programmes.

CURE is having a tremendous impact on the lives of amputees. The 2002-2004 World Health Survey declared that 16.3 of Tunisia’s population possessed some sort of disability. Research also shows that nearly 60 per cent of Tunisians with disabilities do not earn individual income, and the 40 per cent working, earn 40 per cent less than people without disabilities. Making these high-tech limbs available to the poor doesn’t just help them move but also reduces poverty by letting them work.

Cure Bionics’ 3D-printed bionic hands have rotating wrists, a mechanical thumb and fingers that bend at the joints in response to electronic impulses. The bionic hand is adjustable to accommodate a child’s physical growth. It can also be solar-powered for use in regions without a reliable electricity supply.

His work is particularly important for the medical field because racial disparities in healthcare persist, with Black maternal mortality rates over twice that of White women. His work underscores how the healthcare industry has historically focused on white patient care. He began publishing the images on social media, showing conditions like empyema thoracic and seborrheic eczema on Black skin. Many of the images show skin conditions prevalent with Black people, combating a misrepresentation that often leads to misdiagnosis.

Ecological robot by Xaviera Kowo
Africa’s population is growing and evolving quickly. As a result, the continent’s waste is towering faster than control measures. Researchers project that by 2050, Africa’s waste volumes will triple from 174 million tonnes per year as of 2016 to approximately 516 million tonnes per year. Also, deaths in Africa resulting from outdoor air pollution have amplified by nearly 60 per cent in the last two decades. However, approximately half of the waste generated in Africa remains uncollected within Africa’s cities and towns, where it’s dumped on sidewalks, open fields, stormwater drains, and rivers.

18-year-old Xaviera Kowo designed an ecological robot to curb this problem. The waste collection robot by this young Cameroonian programmer and student automatically picks up waste in public spaces and deposits it in bins, recycling centres and other processing sites in record time. She first created the robot during the First Global international robotics competition, where she represented her home country. In March this year, Kowo’s device won her the Margaret Award in the Junior Africa category.

Pollicy by Neema Iyer
In a previous article, we showed how Africa is largely trust-deficient. According to the “One Africa?” report, corruption is the most common story African youths hear about the continent. A major causative is the absence of efficient communication between both parties. However, Neema Iyer, a Uganda-based feminist, is using technology to bridge this gap.

Neema Iyer started Pollicy to create evidence-based engagement between citizens and governments on issues like efficient public service delivery. To do this, Pollicy brings data scientists, creatives, academics, and private companies together to advance conversations on data governance and digital security. Pollicy also has a dedicated focus on the intersections of data and feminism, exemplified in a map of feminist movements in the continent. It has developed a game called Digital safe-tea that provides women with training to confront scenarios of online violence.