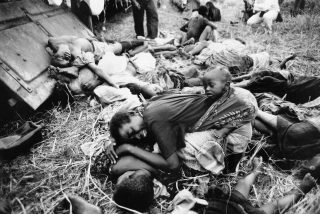 Felicien Kabuga: A discovery that questions France’s role in the Rwanda genocide of 1994

For over 2 decades, the relationship between Rwanda and France has been strained due to allegations around the 1994 Tutsi genocide. Rwanda, in the past years, has criticised the French Republic for harbouring its genocide fugitives. However, the recent arrest of the infamous suspect of the Tutsi genocide, Felicien Kabula on May 16, 2020, in his Paris home seems to be actively repairing the collapsed diplomatic relationship.

In a statement, the prosecutor mentioned that the arrest would not have been possible if the French government had not cooperated. Serge Brammertz, the chief prosecutor of the International Residual Mechanism for Criminal Tribunals (IRMCT) stated that the French authorities had cooperated in helping Rwanda identify Kabuga’s actual location in the Paris region of France.

According to a report, French intelligence agents trailed his children, leading them to an apartment in a Paris suburb of Asnieres-Sur-Seine, ending the multi-state manhunt. Eric Emeraux, head of the Gendarmerie’s Central Office for Combating Crimes Against Humanity has also mentioned that the coronavirus lockdown paralyzing most of Europe meant many investigations were put on hold, allowing a focus on Kabuga’s file.

Commenting on the recent development Brammertz said Kabuga’s children were very instrumental in locating the specific apartment where he was. He also lauded the French police and the office of the Prosecutor General in Paris for their excellent cooperation. However, the latest arrest is raising a cloud of dust about France’s involvement in Kabuga’s successful escape from justice for over 26 years.

In a recent report, Phil Clark, Professor of International Politics and Scholar of the 1994 Genocide against the Tutsi at the London-based School of Oriental and African Studies said that “the discovery of Kabuga in Paris raises major questions about how long he has lived in France and about how much the French authorities knew.” Continuing, he stated that “it is difficult to believe that such a high profile suspect, even with a new identity, could live openly without the French authorities knowing it.”

According to Clark, Kabuga had helped build and fund the Interahamwe militia and the French government had provided much of the needed training for its personnel. This makes Kabuga’s involvement in the genocide tightly intertwined with that of France, accounting for why he sought refuge in Paris as he always had close links to the French Establishment.

Kabuga’s strong connections with the French government was, however, key to the creation of the Interahamwe in 1992, their violent campaign against the Tutsi and the 1994 genocide which claimed about one million people in 100 days.

The Interahamwe were the main perpetrators of the Rwandan genocide, during which an estimated 500,000 to 1,000,000 Tutsi, Twa, and moderate Hutus were killed from April to July 1994. In a report, Gen Romeo Dallaire, the then Canadian commander of the United Nations Assistance Mission for Rwanda (UNAMIR) was tipped off about a stockpile of weapons in one of Kabuga’s warehouses in Gikondo by “a top-level trainer in the cadre of Interhamwe-armed [sic] militia of MRND.”

He immediately sent a fax to the United Nations requesting for authority to raid suspected arms caches, 3 months before the genocide. Dallaire had said that he was in contact with an informant, who revealed he was asked to register all Tutsi in Kigali but suspected an impending genocide against them. He revealed that “in 20 minutes his personnel could kill up to 1000 Tutsis.”

Sadly UN officials rejected his request and instructed him to consult with government leaders tied to the Interahamwe. The genocide fax has over the years become a symbol of the failure of the international community to prevent mass killing in Rwanda.

It was also in the news that applications for import licenses examined by the Human Rights Watch between January 1993 and March 1994 revealed the importation of 581 tonnes of machetes into Rwanda. These machetes which were worth Rwf 95 million were paid for by Kabuga.