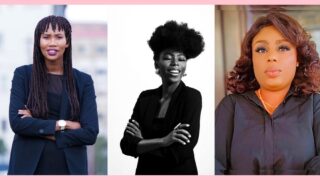 Breaking the bias & building against all odds: 3 women rebranding Africa through technology and education

For centuries, African women have been at the centre of historical movements. From empowering oppressed communities to nation-building, it’s impossible to tell Africa’s story without mentioning women who challenged the status quo. The likes of Yaa Asantewaa, Funmilayo Ransome-Kuti, Miriam Makeba and a host of others have engraved their names in the hearts of Africans through impacts that still echo in modern times. Today, women are still breaking the norm to impact lives on the continent through innovation, creativity and empathy. As we celebrate International Women’s Day, we bring you some women who have touched lives and are playing pivotal roles in rebranding Africa.

A lifeline for livelihoods

Growing up, Blessing Abeng wanted to be a neurosurgeon. After watching her father narrowly pull through an illness as a child, she made it her mission to save lives. Watching a doctor take care of him fascinated her, and she wanted to do the same when she grew up. With her father’s support, she immersed herself in that dream, starting from owning only medical toys and walking around in a lab coat. She then exhaustively read Ben Carson’s books and watched every episode of Grey’s Anatomy. “I thought Christina Yang was my spirit animal. I loved her energy,” Abeng, 27, told Ventures Africa. She knew there weren’t many neurosurgeons in Nigeria and wanted to become one of the few. However, Abeng would later discover that medicine was not the only way to save lives. Today, she is the CMO/co-founder of Ingressive for Good, saving lives by equipping people with technical skills such as coding and connecting them with job opportunities. Read more.

Anchoring the future of African tech

When one thinks of a three-year-old, coding is not the first thing that comes to mind. But what is most intriguing is that age is a great time to learn new skills because children are naturally curious and receptive. Also, Africa is quickly becoming a tech hub with tech arguably becoming a lifeline for Africa’s economy. But there is still a talent shortage. This is why Noluvuyo Gqadu is preserving Africa’s future by teaching three-year-olds how to code. Her initiative, Codenwgana, offers coding and computational skills to children between the ages of 3 to 12 years. “We aim for this age group because the minds of children are uncorrupted and well equipped with the right skills. There are lots of opportunities to solve problems,” says Noluvuyo. Read more.

Saving lives, one bra at a time

The lifetime risk of men getting breast cancer is 1 in 833. Meanwhile, breast cancer is the most common cancer among women. In 2020 alone, over twenty million women were diagnosed with breast cancer, most of which were late diagnoses. Sadly this was the story of Kemisola Bolarinwa’s aunt in 2017. She had been experiencing symptoms of breast cancer, and by the time she got a proper diagnosis, the cancer was at stage three; it had spread beyond the tumour. After her diagnosis, she started receiving treatment at the University of Ibadan teaching hospital. It was a difficult time for Kemisola’s family. Sadly in July 2017, Kemisola’s aunt lost her battle to breast cancer. But the experience would give birth to an idea to help women. In 2019, Kemisola started creating wearable technology to help solve critical issues, ranging from security to health issues. Read more.