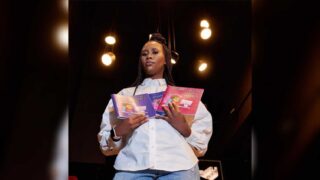 When one thinks of a three-year-old, coding is not the first thing that comes to mind. But what is most intriguing is that age is a great time to learn new skills because children are naturally curious and receptive. This is why Noluvuyo Gqadu has decided to focus on the next generation of problem solvers.

Born and raised in South Africa, Noluvuyo built a career in the tech space, working with different corporate organisations. “I started off doing IT support. Then I moved to a business analyst role where I was a project manager, and finally, an IT manager,” Noluvuyo said. Within seven years, she had applied her technical skills in a variety of industries, beginning with a telecommunications company and progressing to banking and then the mining industry.

During her time in the corporate world, she noticed how difficult it was to find indigenous tech talent in Africa, particularly South Africa. Companies were recruiting talent from India and other parts of the world. “I was frustrated at the time. So I thought to myself, surely if we were to expose kids early enough to coding and computer-related skills, we would be able to change the situation and have the future workforce ready for these jobs,” Noluvuyo recalls. According to a study by the International Finance Corporation, 230 million jobs across the continent will require some level of digital skills by 2030. In 2019, Noluvuyo created a curriculum that she first tried with her son. “I saw there was interest, and he was taking it well. I approached a few parents and started giving out coding classes as an extracurricular activity,” she says.

Ngwana means child in Southern Sotho. Codenwgana, literally translated as code child, is an organization that offers coding and computational skills to children between the ages of 3 to 12 years. “We aim for this age group because the minds of children are uncorrupted and well equipped with the right skills. There are lots of opportunities to solve problems,” says Noluvuyo.

From age 3 to 6, the children are taught the principles of computational thinking such as algorithms, logic, and debugging through various technologies with coding logic such as robots and LEGO technology. They learn basic programming concepts and the Python programming language from the ages of 7 to 9 (grades 1-4). At the end of this level, they can produce a basic program. By the age of 10-12 (grades 5-7), they are taught to develop confidence in their abilities by correcting basic errors in their codes. They also begin to proffer new solutions. “We want our children to not just become consumers of technology from other countries, but to also be in a position to contribute to that technology,” Noluvuyo says. After receiving positive feedback from the parents, Noluvuyo reached out to schools for partnerships to offer classes as an extracurricular activity. Then she got a team together and started offering classes in Johannesburg, where she is still based.

After a few months, Noluvuyo was happy with the progress of her work, but she felt that her original vision of giving back was incomplete. As a result, Codengwana moved its services to underserved communities. “The main reason for doing so is to show that technology is not a field or a space for the privileged.  If we exclude children from disadvantaged communities, we are potentially excluding them from digitally solving Africa’s problems. We are excluding them from the system,” Noluvuyo says.

A year later, Covid happened. Codengwana was one of the millions of organizations affected by the pandemic. “Beyond it being a pandemic, it was also a time that divided us economically. You could see who had resources and who doesn’t. It made it difficult for us to operate face to face,” says Noluvuyo.

Moving past the pandemic, however, did not end the challenges. One of which has been the student’s limited access to technology. In South Africa, only 37 percent of households have access to the internet. “For most of these children, the first and last time they interact with a computer is in a coding class. They then return to their regular lives, to their home, where there is no room to put the lessons into practice. This influences how quickly the children progress and prevents certain concepts from being introduced. But because they enjoy it, learning can be fast,” says Alex Nkosi, a mathematics teacher at one of the schools Codengwana visits twice a week.

But that is not all. When Codengwana started, it searched for literature on coding for children. According to Noluvuyo, they were not difficult to find. However, the books were not relatable. The team used US-based studies to teach kids how to code while looking for ways to apply it to the realities of the South African child.

“There is nothing wrong with teaching with foreign literature. “However, if you take a study designed to teach a child who is privileged to have access to an iPad or other technology and apply it to a child from deep rural South Africa, where basic services like electricity are an issue, let alone access to technology, it could be challenging,” she says. This led Noluvuyo to write her first two children’s coding books, conceptualized based on the realities of some African children. “The idea was that because of our country’s infrastructure challenges, we cannot build computer labs in every community. However, we can share literature in most communities,” she says. The literature helped Codengwana expand its reach. The team went on to publish a coding encyclopaedia for children.

However, the team still had trouble communicating with some of these children. For example, in Johannesburg, where Codengwana offers most of its services, 23 percent of the population speak Zulu, one of South Africa’s official 11 languages. “It’s a bit difficult for them to understand, so we have to interpret. Sometimes it is done through peer support, students who speak better English translate to those who can not,” says Alex, the maths teacher. The books had to be translated into isiXhosa and Setswana, two of the country’s local languages. “What we have done is to try and bring it closer to home,” says Noluvuyo. “It is a way to tell kids technology is a language for all. You too can contribute with what is comfortable to you.”

Codengwana has expanded its reach to Cape town and the eastern cape in South Africa. The team now intends to expand to other African countries. But one of the limitations with extending to other African countries has been resources. Nevertheless, Noluvuyo remains driven by the possibility of future professionals who can solve African problems and limit reliance on western solutions. “For example, in terms of the fintech space in Africa, we still experience challenges with transactions. There are still a lot of red tapes,” she says. “When I think of tech in Africa, I think of our unique struggles. Africa has the potential to do great things. We are just starting to wake up to this reality. We need to start seeing ourselves as our messiah.”

Today, Codengwana partners with schools and corporations to reach a bigger audience. “We are quite fortunate that with most of the schools and parents we work with, there is a close partnership model. They understand the vision and support it,” she says. Although the classes are not free, schools in less privileged areas get sponsored by other schools, corporations, and individuals. And there has also been a growing interest from the government. “It’s just that at times the decision-making at the government level is often long. It would be exciting if the government helps reach more kids,” says Noluvuyo.

Reminiscing on how she started and where they are now, she says, “It is good to walk with your purpose. Don’t wait for things to be perfect to make moves. There is nothing wrong with planning. However, I see the power in what we have done with Codengwana. We have the power to create the future and Africa that we want. We just need to be deliberate and step into such spaces. I did not let the lack of infrastructure stop me. I’m happy when I look at the faces of the children I get to teach and they suggest solutions that are possible through technology.”

Maths teacher Alex Nkosi agrees with Noluvuyo. “I see they actually enjoy learning and are constantly working on getting better. I have also noticed they are learning teamwork, communication skills, risk-taking, and creative skills,” says Alex. Two of Codengwana’s students, Nthokozo Mobaso and Daymos Kamanga, both thirteen, have recently started creating their board games and comics. And Noluvuyo’s ten-year-old son wants to be a developer. Although Codengwana teaches kids how to code, “it is not to breed the next generation of computer scientists. But whether they become accountants or lawyers, we want them to be professionals that can think and solve problems digitally,” says Noluvuyo.