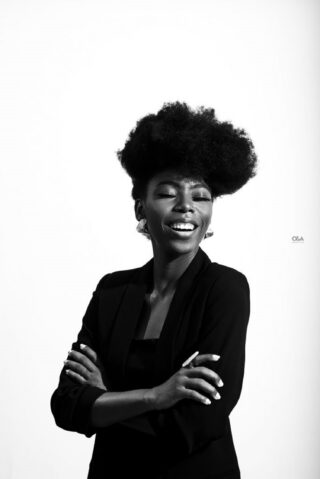 My meeting with Blessing Abeng started unusually. She didn’t seem to be in her ‘formal element’. It wasn’t the regular costumed, cosmetic appearance. Instead, she was in an oversized sweater, wearing a hair bonnet. Less than a minute after exchanging pleasantries, our conversation veered into an unrelated topic — financial inclusion in Nigeria. We had to redirect our chat so we won’t get lost. She was joyful, energetic, and one of the most verbally engaging persons I had interviewed. It was apparent that she wasn’t only confident but was also a great conversationist and storyteller. Little wonder she has become one of Nigeria’s leading branding and communications experts.

Growing up, Blessing Abeng wanted to be a neurosurgeon. After watching her father narrowly pull through an illness as a child, she made it her mission to save lives. Watching a doctor take care of him fascinated her, and she wanted to do the same when she grew up. With her father’s support, she immersed herself in that dream, starting from owning only medical toys and walking around in a lab coat. She then exhaustively read Ben Carson’s books and watched every episode of Grey’s Anatomy. “I thought Christina Yang was my spirit animal. I loved her energy,” Abeng, 27, told Ventures Africa. She knew there weren’t many neurosurgeons in Nigeria and wanted to become one of the few. However, Abeng would later discover that medicine was not the only way to save lives. Today, she is the CMO/co-founder of Ingressive for Good, saving lives by creating livelihoods for them.

Ingressive for Good is an ed-tech non-profit that equips young Africans with tech skills by deploying micro-scholarships, technical training, and job placements. Along with co-founders Maya Horgan Famodu and Sean Burrowes, Abeng harnesses her Branding and Communications expertise to foster the organisation’s growth. Her experience with reputable brands such as Seedstars, Facebook, Diageo, Heritage Bank, African Alliance, Dark and Lovely (Nigeria and Africa), Bolt, GSK, QuickCheck, Startup Grind, among others, have impacted her role in building a global brand like Ingressive for Good.

But between that lofty dream of becoming a Nigerian neurosurgeon and her current role as a tech co-founder is a two-decade-long backstory of explorative risk-taking, creativity, failures and successes.

It started with a “healthy balance.”

Even though Abeng wanted to be a doctor, she always had a creative side, one too conspicuous to ignore. “In secondary school, I was in both science and art clubs. I was in the science department, but I also had to take art and literature courses because the teachers were essentially fighting over me,” said Abeng. “I was winning both science and art competitions, so there was always a dispute over what I should study. My family argued about whether I should study law or medicine. So it’s no surprise that I’ve always had a healthy balance of logic and creativity.”

After an adventurous secondary education, it was time for Abeng to begin her university education. And that would be the first test of her dreams of becoming a neurosurgeon. “There wasn’t enough infrastructure to study and practice, so I’d have to study abroad. But my father believed I was still too small to leave the country by myself. I was this ‘tiny’ girl then. So we agreed that I’d take the longer route: I would study a related course in Nigeria and further my education abroad.” Abeng started studying biochemistry at Covenant University. But she realised the path she had chosen was long, and it became less exciting.

“One day, I was in one of my Biochemistry classes, and I just knew that this wasn’t for me. The teachers didn’t seem interesting to me. It felt like there was nothing more to it, and being a doctor in Nigeria can be very limiting. But I still wanted to save lives, so I started thinking of other ways I could do it,” said Abeng.

Even while at the university, Abeng did not stop exploring outside science. This time, she did not stop at her literary skills – she joined dance clubs. “I love experimenting — it’s my hobby. I love to meet new people, see new places, try something different.” It was on this odyssey she discovered business writing. “One of my friends who knew I was a writer asked me to try writing business plans, and I did. Covenant University has a club where we learnt business writing. Our facilitator then would give us tasks like pitching products to attract investors. That’s how I wrote my first business proposal. Most of the business plans I was seeing at the time were boring and looked similar, so I started adding my creative flair to it.” It didn’t take long for Abeng to fall in love with it and decide she was going into business branding. However, her newly-found passion required her to go against her agreement with her father. So this time, she had to fund her ambition herself. She went ahead, knowing that if she could save people’s businesses, she was still saving lives. She then took her first job as a social media manager to fund her education at the Orange Academy, a renowned branding school.

An indirect link to Flutterwave

Since she had always been a great conversationist, she never got turned down after a job interview. That ability, combined with her consistent track record, paced up her career. By 2019, she had worked across several companies with some of the biggest clients on the continent, including male-dominated organisations. But she got bored and wanted to try something new that year. She quit everything, turning down every offer to build her business. “In under one year, I built the business of my dreams,” Abeng said.

But then, Disha, a Nigeria-based marketplace for digital creators, called her to join, and this time she answered. Abeng became the Chief Marketing Officer of Disha, after which the bootstrapped startup had a monthly growth rate of about 100 per cent, going from 1000 users to over 20,000 users and increased revenue by 5,900 per cent. In November 2021, Flutterwave, a $3-billion fintech, acquired Disha. But Abeng had resigned from Disha before this acquisition.

A few months after leaving Disha, Abeng met Maya, an old friend who told her about the vision at Ingressive for Good. Abeng had never worked in a non-profit before, and she liked what she heard from Maya. “Big tech companies like Facebook and Twitter have moved operations to Africa. It was just the right thing to do that we let more Africans have tech skills that qualify them to work in these kinds of companies,” she said. “The entry barrier to tech is low. It takes about 3-6 months to train someone with tech skills. Meanwhile, if two people got jobs at the same time –one at a bank, and the other at a tech company, the latter will likely earn 2-5 times more.”

Abeng gladly joined as Director of Communications, but in 2021, she was promoted to co-founder for her immense contribution. However, it wasn’t a walk in the park for her or the firm. “When we started, we didn’t have the money, and we needed donations. Since it is a non-profit, it was difficult to get people to sponsor us, especially because we had not done anything yet,” Abeng said. “We had to create a minimum viable product – a pilot program that could convince people that we knew what we were doing.” Ingressive raised an $80,000 seed donation from a single donor to start their pilot program. In that pilot program, Ingressive trained over 10,000 people and partnered with Coursera, which sponsored by providing access to 5,000 licenses valued at over $2 million. The initial target was to get at least half of those licences used by the public. But that wasn’t what happened. “Over 12,000 people applied for the Coursera opportunity. We had to screen rigorously to select beneficiaries,” Abeng said. “At that moment, it became clear that there were much more people that needed what we had to offer.”

Since then, the organisation has raised millions of dollars from several donors, including Alphabet (Google’s parent company), and equipped hundreds of thousands of young Africans with tech skills. “It just shows what can happen when you use the little at hand. All through my career, my greatest discovery is the power of one. It’s overwhelming to think of building a solution and getting millions of people to adopt it. But if you focus on the ‘one’ person that has the problem you’re solving, you’d soon find out that one can become one million.”