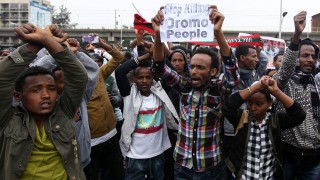 “Vital infrastructure, businesses, health and education centres, as well as government offices, and courts have been destroyed,” Hailemariam said on a state-run television. He added that “a state of emergency has been declared because the situation posed a threat against the people of the country.”

According to reports, Sunday’s protests in Oromia and Amhara regions of Ethiopia left no fewer than 50 protesters dead following the heavy suppression by security forces. “The government has put the death toll from the stampede at 52, while protest groups say the number is much higher. They also say that some of their colleagues died of gunshot wounds inflicted by the security forces,” Amnesty International reported.

The protests in Ethiopia started almost a year ago. The Oromo people claim that the minority-led government has marginalized them and it is taking their land from them. The Ethiopian political economy is dominated and controlled by the Tigrayans, which represents only 6 percent of the total Ethiopian population. Ethiopia is said to have about 80 ethno-national groups. The Oromo population represent 34.4 percent while the Amhara (Amara) accounts for 27 percent.

Since the protests by these two major ethnic groups broke out last year, the government has done little or nothing to attend to the yearnings of the Oromo and Amhara people. Rather, there have been brutal clampdowns on their protests. The government has also defied several calls by international organizations for investigations into the abuse of protesters by security forces.

A state of emergency rather seems like another form of suppression that would only bring about temporary peace at best. So long as the government continues to ignore the affected regions and fail to address their concerns, any peace brought by the suppression which is associated with the state of emergency cannot stand the test of time.