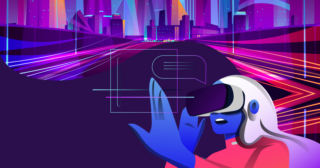 What will your business look like in the metaverse?

Ever since Michael Aldrich allowed people to buy products they saw on TV ads online in 1979, the world has never been the same. That revolutionary business model became what we know today as e-commerce. In 2020, the global e-commerce market reached $25.6 trillion in valuation. The internet has made it much easier for people to buy, sell and even exchange goods and services without physical contact. As a result, it’s becoming increasingly difficult to build a scalable business without an online presence. And the trend is not going to bend backwards. E-commerce growth is accompanying internet penetration in emerging markets. In Africa, everyone seems bullish on its internet economy, despite its volatile regulatory environment.

But while we are celebrating that it has become easier to set up your business online, discussions are floating about the metaverse – the proposed internet of the future. Even though it is still in its infancy, there are lots of speculations about what it is, what it would eventually look like, and its monetary worth. But there are no small valuations attached to the metaverse. According to Bloomberg Intelligence, it should be worth $800 billion by 2024.

What is this metaverse?

An easy way to explain it is that the metaverse is an aggregate of several existing technologies that have received massive adoption in recent years. It’s bringing together Augmented Reality, Virtual Reality, cryptocurrencies, NFTs and social media into one place. It’s an attempt to ‘bring the internet to life’ or, at least, render it in 3D.

Why should you care?

Since e-commerce became popular, there has been a divide between the digital and physical world. Buying goods in traditional brick-and-mortar stores gives shoppers the ability to touch or try out products before purchasing. E-commerce shopping forgoes the physical aspect of brick-and-mortar shopping, but it offers unprecedented convenience, speed and access. But the metaverse aims at bringing these two separate worlds together. And if that happens, it can permanently alter the way we live and do business.

In 2003, Philip Rosedale’s company, Linden Lab, created Second Life – an online virtual world. It allowed people to live digitally with 3D avatars and build virtual mansions, forests and spaceships. It also allowed companies to hawk their products to people. Many top brands, including Reebok, Reuters and Dell, hopped on it, placing their logos, products and content in virtual spaces. In 2007, Rosedale boldly stated that “The 3D web will rapidly be the dominant thing, and everyone will have an avatar.” Second Life got a lot of hype in its early years. However, most companies eventually lost interest in it, and Second Life has less than one million users today. Many of its users complained about poor user experience.

But it’s not wholesome to view Second Life as a failure. It introduced millions of people into virtual spaces for the first time, fostered incredibly tight-knit communities, especially for outcasts or physically impaired people and pioneered digital economies.

That said, even though Second Life looks a lot like what the metaverse proposes, they’re not the same. Unlike Second Life, the metaverse is not one man’s idea — not even Zuckerberg’s. It’s an ideology that many tech companies are building. So it might be a bit refreshing to know that we won’t have to give up on it if one company doesn’t get it right — others can. Also, the metaverse is more about making people have real-life experiences in the digital world instead of living separately.

How would your business look on the metaverse?

E-commerce in the metaverse is bound to accelerate. As the technology and its adoption grow, it will usher in even more new features that merge offline shopping with online shopping.

Online brand image is a collection of many elements. Today, we use images, websites, videos and social media posts to represent our businesses on the internet.

In the metaverse, your business’s image will still be your responsibility. The only difference is that your customers now feel closer to you. They can try out products before purchasing. And this won’t stop you from reaching as many people as the internet can allow.

Also, social proof is already at the core of e-commerce, as seen in the importance of online product reviews on Jumia and other platforms. In the metaverse, your brand will be able to take social proof beyond just a star review by building engaging communities that allow customers to engage with the brand itself and other fans of the brand. Today brands rely on PR activations and influencer events. But the metaverse will open up new opportunities to brands who want to get more of their customers under the same (virtual) roof.

NFTs (non-fungible tokens) are another core part of the metaverse. Your brand can use NFTs for several unique purposes to improve customers’ shopping experience. NFTs will be used to create entirely new digital products. They will also serve as receipts, an access pass to special events or even early access to new product launches.

What should you do?

While the metaverse is supposedly under construction, it won’t be a good idea to sit on your hands. There’s a lot you can do today that will prepare you for the metaverse: