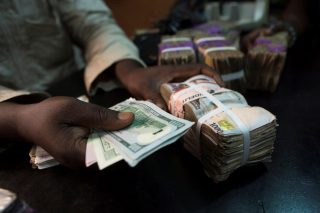 The recent adjustment of the official exchange rate by Nigeria’s apex regulator is a welcome development that will boost investor confidence in the country, President of the Manufacturers Association of Nigeria Mansur Ahmed has said.

Nigeria’s central bank last week adjusted the official value of the naira to the dollar, as parts of measures to converge the nation’s multiple exchange rates and ensure stability. Although the bank did not officially make the revelation, data obtained on the website of FMDQ OTC Securities Exchange on the official rate showed a 5.54 percent change from ₦360 per dollar to ₦381 a dollar.

“This is more so, particularly, now that the economic outlook is gloomy in light of the impact of the ravaging COVID-19 pandemic that has culminated in uninspiring macroeconomic situations,” he said.

The International Monetary Fund and several other development organizations have over time called on Africa’s biggest economy to adopt a single exchange rate system to limit manipulation of the foreign exchange market, an issue the World Bank blames for Nigeria’s falling foreign direct investment.

But in addition to that, Ahmed notes the regulator has to tackle activities that made speculators manipulate the multiple rates like round-tripping – a situation where banks divert foreign exchange obtained from the CBN at the official rate to the black market for higher profits. That creates artificial scarcity and denies users of foreign exchange even in their most basic transactions.

Prior to the official adjustment of the exchange rate, business leaders had voiced support for the move after central bank Governor Godwin Emefiele confirmed the unification plans at an Investors Conference organized by CitiBank last month.

“Firstly, this would eliminate FX arbitrage, ease the dire supply of the greenback, and ensure a more transparent FX market,” said Olutimayin, adding that a unified exchange rate has been one of the persistent requests of foreign investors – both FDIs and foreign portfolio investment. “We expect a unified exchange rate to trigger interest in the capital market and could help stem capital flight,” he said.

According to Debo Adejana, chief executive of Realty Point Limited, the immediate effect of the convergence is a further devaluation of Naira and rise in inflation but the “eventful effect will be increased inflow of FDIs, elimination of cheap money as a result of round-tripping by the privileged few, uniformity of production cost across the board, growth in our foreign exchange reserve among other things.”