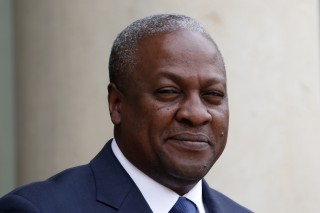 John Mahama is building a 2,500-stall Kotokuraba market in Cape Coast, but it may be another white elephant project

Ghanaian president, John Mahama, is on course to complete the building of the Kotokuraba Market in Cape Coast this year. The multipurpose market will comprise of shops, banks, hospitals and schools and will provide a congenial environment for the market traders to sell their goods while opening the town up for more economic activities. Work on the project began in December 2014, after a court in Cape Coast ordered the demolition of the old buliding to make way for the stadium. This occurred after some traders pleaded with the court to halt the demolition of the old market until decent structures had been provided for their relocation. The project has the potential to play an integral part in the region’s development in the coming years but, as is mostly the case with ambitious enterprises, the devil will lie in the details.

The execution of the project will determine whether it fulfils its potential or whether it ends up as yet another African project where the cost of its upkeep surpasses its usefulness, collectively known as white elephant projects. These white elephant projects are not exclusive to Africa with famous examples being Castellón–Costa Azahar Airport in the north of Valencia and the Huesca-Pirineos Airport.

The market project, being constructed by the China Railway Construction and Engineering Group, is part of the $1.3 billion government loan from the EXIM Bank of China for infrastructural development in the country. It will have offices, a parking lot, restaurants, a fire department block, a drainage system and walkways to ensure the free movement of traders and customers. Making it a significant upgrade from the existing structure.

The fear lies in the prospect that the very traders at the heart of the market place may not be able to secure spaces within the complex as a result of high rent prices or the possibility that the new location may not receive the required patronage. This will jeopardise the livelihood of existing traders and subtract from the attractiveness of the market location. The new ‘ultra modern’ Tejuosho market built in Nigeria was constructed with a similar vision, to restructure the bustling trade in Tejuosho in a more organised and sanitary manner. However, this vision failed to materialise as the complex, commissioned in 2014, remains under utilised. Former market traders complain that they cannot afford the exorbitant rent charged for stalls and the goods they sell do not earn them large enough margins to sustain a stall in the building.

Similarly the Takoradi market circle, a market located in Takoradi the third largest city in Ghana, saw low patronage to its expanded location. Since the completion of a new market built at Apremdo, a suburb in Takoradi about 10 kilometres from the Market Circle, traders have refused to move there. Even though the Apremdo market area had been provided with water, electricity, security and warehouse facilities to make trading activities safe. The Apremdo Market still remains empty whiles traders prefer to sell close to refuse dumps, open drains and places of convenience.

These examples serve as a reminder that, along with the construction of a grand new complex, the soft details are equally as important to prevent the completion of a wasteful white elephant project. Important things to be taken into consideration in the construction of include the integration of former traders into the new space, the efficient dissemination of information to customers informing them about the location change and an emphasis on maintaining reliable and expedient transport links among others. The project gives citizens and traders alike in Cape Coast much to be excited about and the relevant authorities cannot afford to gloss over the relevant details.