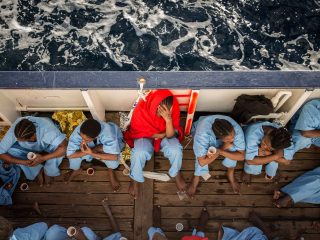 An Egyptian and a Libyan are being investigated in Italy over the death of 26 Nigerian women suspected to have been sexually abused then murdered while attempting to cross the Mediterranean. It is believed that the arrested pair, Egyptian, Mohamed Ali Al Bouzid and Libyan, Al Mabrouc Wisam Harar commanded one of the sunken boats.

The Nigerian women, mostly teenagers aged 14 – 18, were among over 30 recovered bodies at a sea operation that saved thousands of migrants in a four-day period. 23 of the women had been on an inflatable boat, while authorities found three more bodies during another life-saving operation on the Mediterranean.

A report by NPR, says the girls may have been thrown off their inflatable boat into the Mediterranean, as the deaths appear to have been by drowning. Their bodies were offloaded in body bags by crane from a Spanish ship onto the southern port of Salerno, Italy, where they were placed in coffins and loaded onto hearses.

One of the issues raised is whether the dead were victims of sex trafficking or women fleeing the insurgency in north-eastern Nigeria. Federico Soda, Director of the International Organization for Migration (IOM) said it is very likely that the girls were, in fact, victims of trafficking for sexual exploitation. According to him, a recent IOM report estimates that 80 percent of Nigerian girls arriving Italy by sea may be victims of trafficking.

“We’ve observed an alarming, notable increase in the number of Nigerian women and girls arriving in Italy over the last three years, from 1,500 in 2014 to over 11,000 in 2016. The most disturbing trend is that these women are younger and often under the age of 18,” Soda said in a statement by IOM.

In an interview with ThinkProgress, Hilary Matfess, author of Women and the War on Boko Haram corroborates the thoughts of Soda; she explained that the deceased could be part of a trend of young women who are forced by social and socioeconomic pressure, to go to Italy and become sex workers, and not women fleeing the insurgency in Nigeria.

But Salvatore Malfi, the police prefect of the southern town of Salerno, has reservations about the women being victims of sex trafficking. According to him sex traffickers often use different routes because shipping their ‘goods’ (the women) via sea is quite risky. “The traffickers would not do it as they could lose all their ‘goods’ — as they describe them — in one fell swoop,” he told Agence France Press. Hopefully, with the arrests and ongoing investigations, sufficient answers concerning the purpose of the trip and cause of death of the women will be provided.

Most of the migrant survivors that made it to Salerno were from Nigeria, Senegal, Ghana, The Gambia and Sudan, all fleeing a variety of crisis; social, political or socioeconomic crisis. One of the survivors, a 23-year old Nigerian from Benin City, Edo state, said she had no plan on what to do once she arrived Italy, but she just wanted to get away from Nigeria. “I see no future in Nigeria, there are no jobs,” she said.