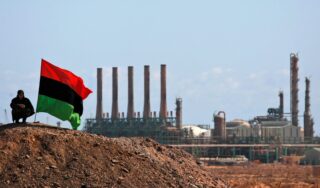 How Libya’s petroleum sector is taking a tough route to democracy.

Before 2010, Libya had one of the best economies in Africa. The Gross Domestic Product (GDP) in 2008 was $86,804 million. That figure ranked it in the 64th position in terms of GDP among the 196 countries published by Country Economy. The absolute value of GDP in Libya rose by $18,593 million compared to the previous year. The bulk of its revenue comes from the petroleum sector. The sector contributes over 95% of export earnings and 60% of GDP.

According to Statista’s 2022 analysis, proven oil reserves in Libya stood at the same spot (6.3 billion metric tons) since 2012. But it recorded an increase from the 5.7 million metric tons registered in 2008. Its oil revenues and small population have given Libya one of Africa’s highest nominal per capita GDPs. But a spate of civil unrest birthed by the Arab Spring has crippled the economy, ended the 42-years reign of Colonel Muammar Gaddafi and stalled oil production for over a decade.

Libya is a North African country in the Maghreb region (West) by the Arab World. The Mediterranean Sea and six other nations, including Egypt, Sudan, Chad, Niger, Algeria and Tunisia, are on its borders.

Before the civil war, Life was good for Libyans. Recounting his experience in Libya, Godwin Ndego (name changed to protect identity), a one-time migrant to the Afro-Arab country said, “Libya was a beautiful place to live. Libyans were not religious bigots, and many led simple lives. The government of Muammar Gaddafi provided jobs and affordable housing for citizens and even paid some money to citizens’ accounts. I remember a colleague saying the government provided free housing for newly married couples who applied for one,” he said.

But in the midst of this, the people lived in fear. The fear of its multibillionaire dictator ruler, Colonel Muammar Gaddafi. “I got into Libya legitimately to work as a contractor with a construction firm. The moment I stepped into the country, I noticed that the face of Gaddafi was everywhere. On every billboard. And, the people called him king. He seemed like a demi-god. Untouchable. No one dared to point at his residence, no matter how far they were. I did try to one time, but someone slapped my hands. Another thing I observed was that women did not have rights, and no one could dare to challenge ‘the king’,” he added. The expert lived in Libya for four years before returning to Nigeria in 2010 after his contract expired with the international firm he worked with.

Trudging the rough path to democracy

In 2011, the North African country fought its first civil war between forces loyal to Gaddafi and rebel groups who wanted to oust his government. The battle was a spillover of the Arab Spring- a series of anti-government protests, uprisings and armed rebellions that spread across much of the Arab world in the early 2010s, starting from Tunisia. The crisis was a response to corruption and economic stagnation in Tunisia. Before long, it spread into places like Lybia, trailed by wild protests, riots, insurgence and the eventual ouster and gruesome murder of Muammar Gadaffi.

The Libyan uprising began as a peaceful protest where the people demanded democracy, fundamental human rights and gender equality. In return, the Gaddafi government shot live bullets at protesters. Consequently, the people had to pick up guns to defend themselves. The Libyan Civil War lasted between 15 February and 23 October 2011, shortly after Gaddafi’s death.

Hence, Libya experienced a breakdown in economic activities. By the end of 2011, the economy had contracted by 62.1%, interrupting growth. Although it rebounded by 104.5% in 2012, it eventually crashed again following the Second Libyan Civil War, which lasted from 2014 to 2020, and interfered with oil production. Therefore, the economy took on sluggish growth, was badly wounded and kept in the crossfire between the UN-backed government and various militias seeking to gain control of its oil wealth.

In April 2022, fresh protests and political rivalries against a new government forced the Libyan National Oil Company (NOC) to shut down production at key oil fields as protesters threatened to keep key export terminals closed. The closure incurred losses of over $3.5 billion for the Afro-Arab nation. But given recent progress with security, last week, the Government of National Unity (GNU) announced the lifting of a force majeure on oil and gas exploration activities in the country. TotalEnergies and Eni are some of the multinationals that have expressed interest to resume production in the country.

Gaddafi considered Western-style democracy as a never-ending dictatorship where politicians can hold power for decades through flawed party politics, minority governments & massive campaign spending. That caused him to resist the NATO-backed pro-democratic movement, a move that eventually escalated into a bloody civil war which Libya is yet to recover from today. He was captured and killed on 20 October 2011 after the Battle of Sirte. At the time of his death, the dictator was worth billions of dollars. Although Gaddafi is out of the way, Libya has not arrived at the democracy it hoped for, and its route to economic freedom still seems long.