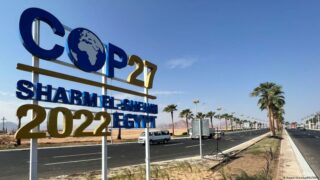 It has been one week since heads of state and government leaders, negotiators, climate activists, journalists, and civil society groups from more than 170 nations have come together to raise funds, make pledges, and negotiate on how to save the earth from global warming.

The annual conference of parties, now in its 27th edition (COP27) is of particular importance not just because it is the “implementation COP”, or the largest COP summit ever, but also because it is being held in Africa – a continent most affected by the rapidly changing climate of the earth. The conference, presently held in Egypt, has been dubbed Africa’s COP. One would ask why since the summit has previously been held in African countries like Morocco (2001 and 2016), Kenya (2006), and South Africa (2011).

One can say it is being held on the continent at a time the devastating effects of climate change are ravaging the whole continent – from flooding in Nigeria, Western Africa, to drought in Somalia, Eastern Africa. And this is the best time yet to make demands and amplify their climate stories and realities to world leaders.

Since last week, topics of discussion have bordered around six main issues: just transitions, food security, innovative finance for climate and development, investing in the future of energy, water security, and climate change and the sustainability of vulnerable communities. And this discussion is expected to last till the 18th of November, 2022.

Below are some takeaways for African countries at the present conference so far.

The “Loss and Damage” agenda was adopted by the Conference of Parties at the opening plenary session of the COP27 conference led by Sameh Shoukry, COP27 president. The newly introduced “Loss and Damage” concept would see countries that have contributed the most to climate change with their emissions pay poorer countries to recover from the resulting disasters suffered.

To put it into context, the loss and damage fund would enable countries like the Democratic Republic of Congo, Mali, and Nigeria, whose economy has been affected by flooding in recent times get paid for the loss and damages experienced. While the concept seems similar to the longstanding $100 climate finance, they are distinct.

Loss represents economic impacts like lost agricultural production that can not be easily quantified, while damage captures the destruction of homes, roads, schools and other infrastructures that are calculable. Meanwhile, the $100 billion climate finance is to help poorer nations mitigate and adapt to climate change.

Some funding announcements were made for loss and damage last week, but larger nations continue to push back on the funding proposals. For example, countries like Germany and Belgium have pledged to tackle climate loss and damage with €170 million and €2.5 million respectively. But it is not all rosy. The United States and European Union, which had been against poorer countries’ past attempts to secure loss and damage funding maintain their stance and claim they  are already one of the largest contributors to climate finance

Also, China said it would not pay into a climate loss and damage fund for developing nations. Historically, China has contributed to about 13% of the world’s carbon emissions since the start of the industrial revolution, while the United States and the EU account for over 20% each. Notably, one of the biggest debates at the conference would be whether to create a dedicated financial mechanism for loss and damage.

The African Union, African Development Bank Group and Africa50, in partnership with several global partners, launched the Alliance for Green Infrastructure in Africa (AGIA), an initiative to help scale and accelerate financing for green infrastructure projects in Africa.

The mission is to raise significant capital to accelerate Africa’s just and equitable transition to net zero emissions. With two strategic objectives in mind, the initiative would generate a robust pipeline of bankable projects and propel financing for Africa’s green infrastructure.

The alliance is seeking to raise up to $500 million for early-stage project development capital, with the goal of generating up to $10 billion in investment opportunities for the private sector.

The United Kingdom announced it would invest £95 million to advance climate-resilient agriculture in Nigeria. At least four million Nigerians, including two million women, are expected to benefit from this investment to increase productivity and adapt to the effects of climate change while reducing emissions.

For a long time, agriculture has been integral to Nigeria’s economy. It contributes as much as 23.7 per cent to its GDP and employs about 35 per cent of the population. But climate change and its accompanying effects, like intense droughts, heat waves, and floods, threaten agricultural productivity. Hence the need for farmers to practise climate-smart agriculture that would ensure food availability all year round regardless of the planting season.

The investment, named Propcom+ is the UK government’s investment in agriculture through the Propcom Mai-Karfi programme in Nigeria, set to help address key barriers to sustainable agricultural development in Nigeria. “It will support the development of climate-resilient agricultural policies, actions, and investments that deliver nutrition, increase productivity, adapt and build resilience while reducing emissions, and protect and restore natural ecosystems,” the UK said.

The £95 million is part of the over £100 million investments by the UK to support developing economies to respond to climate-related disasters and adapt to the impacts of climate change.

Bill and Melinda Foundation has pledged $1.4 billion to Africa, including Nigeria, to spur the region-led innovation to build a resilient pipeline of climate-smart agriculture projects for smallholder farmers. The commitment is part of the foundation’s efforts at global climate talks in Egypt to scale up the supply of “adaptation finance.”

Kenya, Egypt, Zambia, Malawi, Mozambique, Namibia and Tanzania, are among the first few countries that will receive funding from Nature, People and Climate Investment programme (NPC), a newly launched initiative by Climate Investment Fund (CIF). The $350 million was raised by Italy, the United Kingdom, and Sweden.