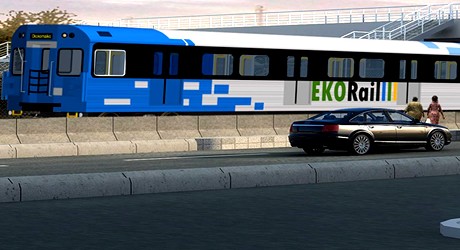 Lagos State Government has had to explain the delay in the completion of  the state’s light rail project for which it borrowed N160 billion ($981 million) from the World Bank. Lagos, Africa’s largest city with an estimated population of 21 million people, struggles with high population density and an ineffective transport system in desperate need of overhaul.

The state government’s explanation was prompted by the publication of the state’s debt profile by the federal government. Lagos and Abuja have not always enjoyed the best relationship, a trend further confirmed by the commercial capital’s  reservation over the decision of the administrative capital to make the debt profile public.

Lagos Governor Babatunde Fashola, who is at the tail end of his second tenure, stated that the debt was not in any way overwhelming the state citing the fact that Lagos has the fifth largest economy in Africa.

The response however brings back the light rail project into attention, given the dire need to reduce the logjams that typify Lagos roads, the huge funds invested in it and the history of failures that have bedeviled rail transport in Nigeria.

The Rail project, sponsored by Lagos Metropolitan Area Transport Authority (LAMATA), is envisioned to consist eventually of seven lines, however even the initial construction of the first planned two lines have suffered delays. Fashola says he has so far been disappointed at the progress of the project as it is not been executed “as smoothly as possible”, but was optimistic of its completion. Though expressing satisfaction on the progress of the light rail project, the governor decried the petty delay that was encountered as a result funding, saying the project would have been completed in another 12 months. The governor however failed to put a date on the completion of the project.

The Light Rail project has however been a very long journey for the state’s transportation sector. First conceived in 1980s by the Lagos Governor Alhaji Lateef Jakande during the Nigerian Second Republic, the project was scrapped in 1985 by the Military junta of Muhammadu Buhari at a loss of over $78 million to the Lagos tax payers.

The idea was again revived by former Governor Bola Tinubu in the early 2000s with a formal announcement of its construction in December 2003. This initial $135 million proposal was part of the greater Lagos Urban Transportation Project to be implemented by the newly formed Lagos Metropolitan Area Transport Authority (LAMATA). LAMATA initially concentrated on developing a Bus Rapid Transit system (BRT) before embarking on focused initially on the Blue Line and the Red Line.

The Blue Line, being built by China Civil Engineering Construction Corporation,  will run 27.5 km, with 13 stations, and an End-to-end journey time of approximately 35 minutes. It is being built as a high capacity, electrically powered rail mass transit system. Most of the route will be on the surface, but a part of the line will run on elevated structure. The entire Blue Line will operate over a secure and exclusive right-of-way, with no level crossings and no uncontrolled access by pedestrians or vehicles.

Lagos State is financing construction of the Blue Line from its own resources. A concession contract is being awarded to finance, supply and operate the railway equipment, including electric power, signalling, trains, and fare collection. The Red Line will share the existing 30 metre wide Nigerian Railway Corporation (NRC) right-of-way, according to the planning.