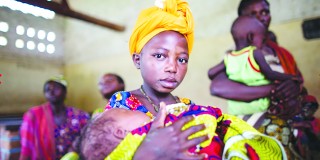 Child marriage: What African leaders should learn from Zimbabwe

The latest ruling against child marriage in Zimbabwe is a victory that deserves to be celebrated. Zimbabwe is one of the four southern African countries with the highest rate of child marriage, according to the United Nations Population Fund.

In a 2014 survey by Zimbabwe’s National Statistics Agency, one in three women between the ages of 20 to 49 reported that they were married before they turned 18 years old and an estimated four percent got married before the age of 15. Although Zimbabwe was one of the African countries to adopt the Sustainable Development Goals, which has a target to end child marriage in the next 15 years, the country’s law had yet to reflect a definitive stance against child marriage.

According to Human Rights Watch, “Zimbabwe has conflicting legal provisions on the minimum age for marriage. Zimbabwe’s constitution does not expressly prohibit child marriage and a number of laws effectively condone it. The gaps in the law, extreme poverty, poor access to education, harmful religious beliefs and social norms fuel child marriage in Zimbabwe.”

However, it seems Zimbabwe has now taken a stronger stand, as some former child brides took the government to court to challenge the existence of child marriage in Zimbabwe and won. Loveness Mudzuru and Ruvimbo Tsopodzi, who got married before they turned 18 years old, highlighted poverty as the primary cause of their early marriage.

Mudzuru, who was married off when she was just 16 years old and had two children before she turned 18, stated in her affidavit, that “young girls who marry early and often in poor families are then forced to produce young children in a sea of poverty and the cycle begins again. Raising a child when you are a child yourself is excruciating and painful.” Lending credence to Muduzuru’s words, Tsopodzi who got married at 15 said she suffered emotional and physical assault. She said “My life is hell at the moment and cannot be wished on anyone else.”

According to statistics, Africa has 15 out of the 20 countries in the world with the highest rates of child marriage and UNICEF has proposed that, if the current trend continues, the number of child brides is expected to double by 2050.

In order to meet up with the UN’s Sustainable Development Goals (SDGs), African leaders need to be more proactive and ensure that a law is put in place to end child marriage in each country and beyond that each state within each country, as a lack of implementation in individual states is part of why child marriage is so difficult to eradicate. In the grand scheme of things, tackling this issue goes beyond meeting up with a target. Rather, African leaders need to focus more on protecting the female child and empowering them by ensuring they have access to quality education and a voice.

African girls deserve to be protected from sexual and domestic violence, HIV, obstetric fistula and all other diseases that are associated with these marriages. They deserve to have a future.