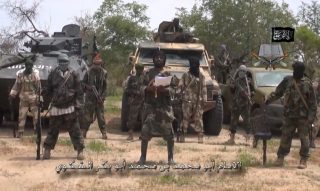 If we are truly winning the war against Boko Haram, why are we paying for hostages?

Last week, it was announced that the federal government had facilitated the release of two University lecturers kidnapped by Boko Haram. It also said it had secured the release of some policewomen who had also been kidnapped a few months ago. But despite suggestions that the Nigerian government paid nothing to secure their release, there have been reports that they actually did.

Sahara Reporters claims the federal government paid two factions of the insurgents millions of Euros to free the hostages.

FLASH: After claiming Boko Haram had been defeated Nigerian govt paid millions in €s, to 2 factions of BH to free policewomen and university lecturers abducted last year. The ransom paid is enough to keep the insurgency going on for another year says a source at @AsoRock

This could be true, simply because that is the Nigerian government’s way of negotiating with terrorists. After another set of Chibok girls were released last year, reports emerged later that Nigeria paid 3 million euros to the insurgent group in exchange for the girls. There have been other money-for-hostage exchanges before, sometimes involving captured Boko Haram commanders.

While these questions might look apathetic to the plight of the released hostages, they are quite valid. Is Nigeria’s end-game to continue paying Boko Haram for the release of hostages, especially when their kidnappings could have been avoided in the first place. And how do we determine which hostages are not worth paying for, seeing there are so many hostages still under Boko Haram captivity?  Where is this money coming from? Is there a “money account for Boko Haram hostages,” Is part of Nigeria’s defense Budget being spent? Is paying for hostages a media show?

Following the decision of the Nigerian government to borrow a billion dollars last year from Nigeria’s excess crude reserves, there have been questions on how the Government intends to spend it. Asides from the North East Development Commission, there have been concerted efforts by private citizens and international NGOs to chart a recovery process for North East Nigeria. And speculations are rife now that this is indeed how the government intends to spend it; indirectly arming the terrorist.

Despite two immature announcements of Boko Haram being defeated, Nigeria is still exchanging money for hostages. And it is logical; Boko Haram wouldn’t release its hostages for free if it was receiving nothing in return. So, while we delude ourselves with defeating Boko Haram, they are receiving money for services rendered, and adequately stocking up. It is a lucrative business.

The insurgency in the North East is one of the longest-running in history, having begun in 2009. And it doest seem like it will end soon, as many officials in the previous and present administration have noted. The fight against terrorism is one of the biggest cash cows in the history of the country; fake defense contracts, non-existent arms procurement deals, payments of salaries to ‘ghost soldiers,’ a culture of corruption among Nigeria’s top military and political officers in charge of Boko Haram funds and diversion of funds and goods meant for IDPs. There are now fears the $1 billion budgeted to fight the Boko Haram insurgency would be diverted to sponsor President Buhari’s re-election campaign.

Hence,despite claims that the release of hostages from Boko Haram was pre-arranged and that the federal government is simply paying itself hostage fees, seems far-fetched, there is probably an iota of truth in them. Nigeria may not be deceiving its citizens with the money-exchange-for-hostages, but there is definitely something wrong with this arrangement. If we are winning the war against Boko Haram, why are we paying for some hostages?