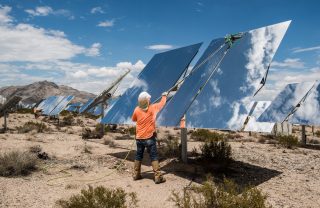 Over time, an energy revolution has been predicted to occur in Africa. Fast-dropping costs for renewables, combined with plenty of resources and a huge need for electricity on a continent where many are still without it, means there is plenty room for the adoption of cleaner sources of power.

Beyond powering homes, Africa’s vast solar potential presents a huge opportunity for people to engage in a range of economic activities such as irrigation and agro-processing, boosting its economies, and creating jobs for millions of people across the continent.

A number of technological and financing advances – such as off-grid and pay-as-you-go solar, with payments made by mobile phones – are helping realize that potential, lighting up homes in Nigeria, Ivory Coast, and the Eastern region for instance, for notably less than keeping a generator on hand.

But the shift to renewables has been relatively slow in Africa, where more than 600 million people are estimated to be without access to electricity. Among some challenges are high upfront costs associated with renewables compared to traditional fuels.

Ventures Africa (V.A): Can you tell me a bit about the solar/renewables sector in Africa today, its importance, and how it is developing?

Anu Adasolum (A.A): The growth in the adoption of renewable energy in Sub-Saharan Africa has been encouraging in the past few years but we are still some way off meeting the UN’s sustainable development goals (SDG7) for affordable and clean energy. I think it is very difficult to overstate the importance of this sector to the development of the continent as a whole – progress in the sector will directly translate to economic growth as the difficulties of business operations ease with stable power sources.

On the commercial and industrial side of things, we seem to be hitting our stride as more financing solutions come into the sector so baseline costs compete with other sources of power. There is however still the hurdle of overcoming the upfront cost of adopting renewable energy products at scale in the retail sector. While these products offer much more value over the long term, individuals often still find the initial cost burdensome. As the financing solutions filter down to this level of things, I am confident renewables will become the main source of energy in Africa.

V.A: What are the main barriers to renewable energy development and electrification in Africa and how can they be overcome?

A.A: The main barrier remains affordability and finance at scale. As I mentioned above, renewable energy products tend to have long lifetimes, and so are very good value over time. However, that initial cost has to be borne.

The second is education – there is a lot of misinformation on the nature of the products and how to maintain them. Finally, there’s the technology – a lot of the higher quality products haven’t been built specifically for the African use-case and take a bit of engineering to apply to our needs. Increasingly, you see easy to use technology, such as our Keepwork portable backup power system being rolled out, and that will do a lot for adoption rates. I believe these issues are largely overcome as many more companies enter the space and execute at scale.

V.A: Do you think that Africa is feeling any added pressure or likely incentive to double-down on its climate and clean energy efforts? And how could businesses and investors see renewables as viable investment options especially in the wake of COVID-19?

A.A: While COVID-19 has created unanticipated economic challenges globally, African countries are particularly vulnerable to its impact. The World Bank forecasts that Sub-Saharan Africa will experience its first recession in over 20 years. No doubt every African government feels committed to attaining sustainable development goals such as increased access to power but the reality is that these goals will be much harder to achieve with a contracted economy in the region. There is a real opportunity here to invest in national infrastructures that lean towards cleaner energy as a way to futureproof challenges people are facing now.

In addition to being good for the environment, the best thing about renewable energy infrastructure is how much value for money it is overtime and the lack of complex infrastructure needed to establish it in an area. Micro-utilities such as ours can be built in very short timelines, don’t depend on making any change to the grid, and of course, require much lower capital thresholds than the larger-scale approaches taken with energy in the past.

V.A: Our energy markets to date have been built around fossil fuels. From a market perspective, what will need to change about how we buy and sell electricity in order to function with higher levels of renewables on the grid?

A.A: My argument would be that we don’t necessarily need to get higher levels of renewables on the grid, especially in Nigeria. By nature, renewable energy means you can place equipment anywhere and generate continuously. The grid exists because of the former need for a centralized generation. With that need gone, it is more a question of the evolution of the relevant technologies to apply in broader use cases, which is generally the case.

Of course, there will always be a need for larger-scale power but renewable energy costs are already at a level where they compete with energy from non-clean sources. This is evident in Europe and the United States where a lot of the concessions that used to be given to large scale solar supply have been pulled because solar can compete on its own now.

V.A: When we’re looking at the growing share of renewables in power grids, where can we expect them to be in 10-20 years? Is it possible to supply 100 percent of Africa’s electricity from renewable sources?

A.A: Technically, the main barrier to achieving full renewable energy supply to the grid is the need for storage with most renewable energy power sources. As the costs of batteries reduce, this will become a non-issue.

100 percent is still unlikely given the amount of capital required to completely replace infrastructure, but I do think in 20 years we will be very close to that number. The main driver of that is economics – the costs of large scale solar and maintenance are dropping significantly. Given that the technology lifetime is now just about the same lifecycle as gas turbines (20 years), it makes sense to invest in solar instead. After fossil fuel sources, the largest source of power to grids in Africa is Hydro – a renewable source with plants lasting up to 100 years, so we’re already partly there.

Assuming governments have the will, there is a lot of space to ensure our grids are supplied by clean energy sources as the existing fossil fuel generation sources become moribund. And the economics means there is no reason governments shouldn’t have the will.

V.A: Where do you think we can expect to see new or significant policies encouraging solar adoption in the next few years within Nigeria and the region at large?

A.A: There are already a lot of policies encouraging solar adoption in Nigeria – and I believe we will continue to see more. The government understands the value of renewable energy and international bodies are also encouraging adoption. This trend will likely grow.