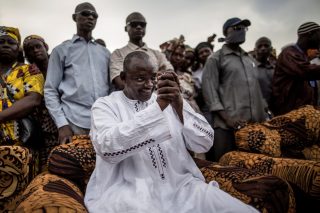 Gambia raises €1.45 billion from the international community to finance its economic plan

Since taking office and discovering government coffers were largely empty, Adama Barrow’s administration has been sourcing for funds and working to resuscitate the debt-crippled economy of the Gambia.

To support the new government, major international organisations have pledged 1.45 billion euros ($1.7 billion) to plug the financing deficit in the new government’s National Development Plan (NDP). The conference organised by the country and co-hosted by the European Union in Brussels drew delegations from 43 countries and ten international organisations.

“At present, the total cost of the flagship [projects] stands at 2.4 [billion euros] with a financing gap of 1.6 [billion euros]. It is this financing gap that I am presenting to you for funding. Given the economic challenges we have inherited and the numerous development issues to address, the effective implementation of the national development plan requires significant donor support,” the Gambian President, Adama Barrow, told participants at the conference.

Under its former ruler, Yahaya Jammeh, Gambia had stockpiled public debts that represented 130 percent of its Gross Domestic Product last year.  Earlier this year the International Monetary Fund warned the new government to refrain borrowing. More than half of that debt is owed to external creditors, the IMF said in a statement.

In order to raise some funds, Barrow had also resorted to selling several planes and a fleet of luxury cars purchased by former president Yahya Jammeh.

“The fleet of expensive vehicles at State House and the three planes bought by former president Yahya Jammeh have been put on sale,” Finance Minister, Amadou Sanneh told Reuters earlier this month.

President Adama Barrow presented his three-year NDP for 2018-2021 and it gained the support of the international organisations present, with the EU committing $140 million in grants. The EU is backing the government’s drive to build a strong democratic institution that “respects and protects human rights and enjoys economic growth and sustainable development.

“And today, I am delighted to say that the European Union has pledged additional 140 million euros to its existing support. Together, with contributions pledged by other participants in today’s conference, we have reached the total amount of 1.45 billion euros of support to the national development plan of the Gambia,” said EU’s International Development Commissioner, Neven Mimica.

African countries have often received grants and concessions from the international community; an estimated $36 billion in official development assistance was received by sub-Saharan African countries in 2016. However, the problem lies in the capacity and willingness of political leaders to implement their proposed plans. Over 2.1 million Gambians are all hoping  Barrow’s administration is different.