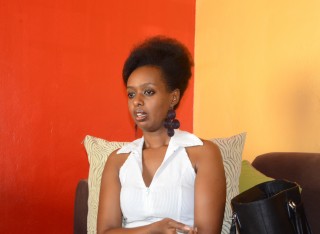 As the Rwanda’s presidential elections scheduled for August draw closer, candidates have declared their intentions to run. There’s the juggernaut (Paul Kagame), the usual suspects and then the wildcards. The juggernaut comes in the form of Paul Kagame, a man who has been president of the East African nation for 17 years. One of his “usual suspects”, opposition Frank Habineza, is once more involved, but the others have yet to show their interest. However, this time, there are many candidates running independently; a Catholic priest, a journalist and perhaps, the most exciting one, Diane Rwigara, a woman who seems to tick all the boxes for who not to be as an African presidential hopeful.

Rwanda’s election could present a watershed moment for the country. It would take an outlier to oust Paul Kagame from power, someone who belonged to a demographic that isn’t the norm. Well, that outlier seems to have arrived in Ms Diane Rwigara.

Diane Rwigara is a 35-year-old female accountant who believes she could make a difference in Rwanda. Though the daughter of a rich Rwandan tycoon, she wants to “eradicate poverty, champion free speech, and provide health insurance for all Rwandans.” She’s an ardent critic of Kagame’s administration, calling him out several times for his alleged human rights abuse. Her father, Assinapol Rwigara, died from an accident last year, which family members still claim foul play was involved.

Paul Kagame has overseen a remarkable economic growth in Rwanda after the end of its civil war. His party, the RPF, has been in power for 23 years, with him president for 17 of them. The Rwandan economy was named as one of the world’s most resilient economies, and the country is seen as one of the most beautiful countries in Africa. Rwanda has been able to reduce child mortality, achieving the highest average annual reduction in child mortality in the world. Improved food security and gender equality are some of the achievements of Rwanda under Kagame. Last year, the constitutional term limits in Rwanda were removed for Kagame though a referendum.

Despite these, Kagame has been accused of masterminding some of the worst human rights abuses in a democracy in the world. The run-up to the last elections in 2010 in Rwanda was characterised with arrests and imprisonments of opposition leaders and journalists, media censorship and an underlying propagandist atmosphere in the country. His Rwandan intelligence unit, a remaining institution from Rwanda’s civil war days, has allegedly been his tools behind these abuses.

Diane hopes to put an end to those and more. “Everybody who is Rwandese knows people who have disappeared or who have been killed and the perpetrators of those crimes have never been taken to justice,” she said. “I know how it feels to be a victim so that will help me not victimise others.” She said if she was elected, her government would “tolerate dissenting views,” a sly dig at Kagame’s administration.

However, her other “problems” would make her a tough choice for president. She is young, female and independent, three things that scream vulnerability in African political circles.

Though Rwanda has the highest female representation in politics in the world, which is rare for African countries whichever way you look at it, Diane is only the second woman to contest for president in the country. The first declared her candidature in 2003 but later stepped down to show her support for Paul Kagame. And just like her, another woman, Fadumo Dayib, tried to be president of her country Somalia but couldn’t due in part to threats on her life. A smear campaign has evolved already on Diane the end of which is to see her step down also.

Her nude pictures have made the rounds on the internet, almost as soon as she announced her intention to run for president, with reports allegedly claiming they were leaked by Kagame’s intelligence agency.

Breaking the glass ceiling would be tough but she would be increasing the numbers of female presidents in Africa, and probaly inspire other women to join politics in other parts of Africa.

She’s also 35 years old. That makes it difficult for her to be president automatically. Most of Africa is ruled by old and long-serving presidents, most of who are still stuck in the 80’s communist era. By the end of this year, Paul Kagame would have turned 60 and would have spent 23 years as a head of Rwanda.

Young Africans don’t partipate in politics due to the fact that African partisan politics have no space for youth inclusivity. The youth arm of African political parties is usually the armed “arm”, the party’s army. The median age on the continent is 19.5 years but people in this age bracket hardly have anything to do with politics.

Hence, perhaps most importantly, Diane should provide a space for youth participation in her election manifesto.

She’s running independently. No one does that in Africa and hopes to win. African politics is wholly partisan. Ruling parties are validated by their longevity and the frequency with which they churn out presidents. Rwanda’s ruling RPF party, Tanzania’s Chama Cha Mapidunzi are few examples of parties people who dream to be president should join.