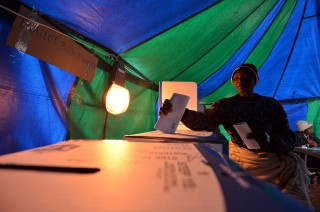 Africa is young at heart, but the people leading her are too old to relate with her youthfulness. She has lots and lots of ideas, but they remain ideas because the only people she can tell it to – who can do something about them – are too old and stuck in their ways. These people have been around too long to try new things and like the saying goes, you can’t teach an old dog new tricks.

With over 200 million between the ages of 15 and 24, Africa has the youngest population in the world. But if you look at the list of heads of state on the continent, out of the 54 countries, at least 24 of them have presidents that are aged above 70. Zimbabwe’s president, Robert Mugabe, is 92 years old, but his country’s median age is 20.6. South Africa and Nigeria have presidents that are both 74, but their countries’ median ages are 26.8 and 18.3 respectively.

So, asking ourselves why Africa, with such a young population, keeps voting in old men as presidents is a valid question, one that Chude Jideonwo, CEO of RED Media, attempted to answer in his recent article on Quartz.

Why are Africa's young people voting for old men? My piece for Quartz here. https://t.co/aE3TAy0Wc8

According to him, the reasons were;
1) Responsibility: Young people have to vote between two available options and, because they are tired of the status quo, they go for the option that least resembles it.
2) Pragmatism: They have to vote for old men because they are the most realistic options available and because “the next generation has just come into its own over the past half-decade, … it has only now begun to build the street savvy that can win elections or hijack political systems.”
3) Cynicism: Apparently it has “become apparent youth is no guarantee of a change for good. The politics of Nigeria, Ghana, Cameroon and neighboring countries are littered with young leaders who campaigned on their youth, only to get into government and line their pockets or war chests as those before them.”

When considered independently of the writer (and I say this for a reason), those points seem valid. But the article has been met with polarised responses, most of them chiding Chude for “selling a bad product” and then turning around to try and absolve himself of his role in getting Buhari into power (Chude is the head of the PR agency that handled Buhari’s campaign). Some argue for him, saying that he was simply doing a job he was paid to do and that he is not ‘RED Media’. However, those arguments fall flat when you consider that he actively campaigned for Mr President, going as far as calling him “the democratic ideal”. 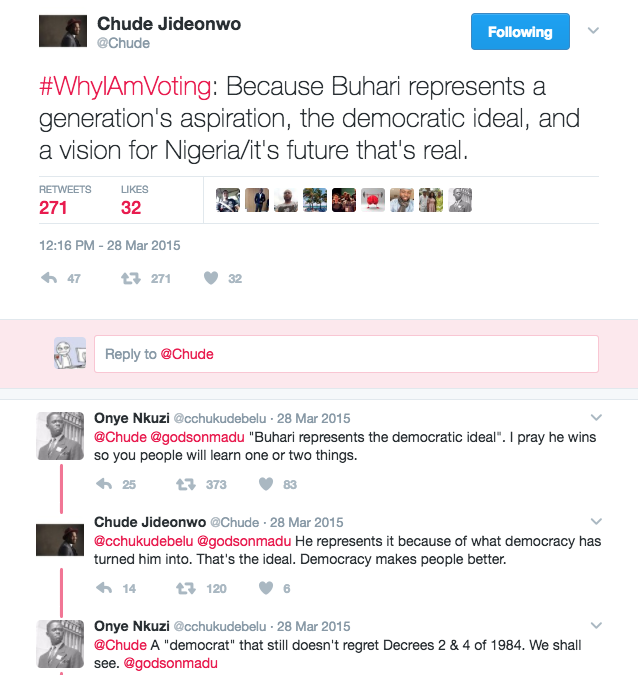 So, for the part he played and the way things have played out – because it turns out Buhari isn’t really “the democratic ideal” – his article has received severe backlash on social media. Inferring from the comments, the consensus is that the man that helped package Buhari as Nigeria’s messiah (although for business reasons) has no moral ground to now try to explain why “Africa’s youth vote for old men”.

Ha ha. You should know having "packaged" two septuagenarians in the recent past… https://t.co/BZlKh7En18

Chude you sold us this particular old man! Am I missing something here? https://t.co/vSuX5uFsaG

Beyond the noise, however, the reasons why Africa’s young people vote for old men go beyond responsibility, pragmatism, and cynicism. The temptation would be to boil it down to choice – that voting for old men is the only choice we have. But dig deeper. Why are they the primary choices? Therein lies the crux of the problem.

In Nigeria, for example, there are certain cultural barriers that prevent young people from running for high political positions. One is that old people usually look down on the young – they are often seen as unserious, naive, and unfit to lead.

In some African cultures, elders are never wrong even when they are, and young people never know more than their elders even when they do. The elder can say whatever he wants to the youth, he can be rude to the youth, he can disrespect him and talk down on him, even when he (the elder) is at fault, and the youth must take it because he is the youth. This is often reflected at grassroots levels where, in villages and wards, elders hold all the key positions. There’s even a saying in a Nigerian tribe that “when elders are talking, the youth must be quiet.” When you take this idea and magnify it, you start to see how the culture is already rigged to make elders think that youth have nothing beyond physical strength and youthful exuberance to offer when they (the elders) are around. The few times young people are allowed to lead are times when they are leading their peers (as seen in student unions and community age groups).

These cultural barriers, when taken to the state level, result in youths having little to no political pedigree. Winning an election is a complex process. First, you need premium political connections (you need to know people and people who know people). Then, you need money – lots of it; this is where donors come in. People donate to your campaign in hopes that you will win and favour them with your policies and your actions; they won’t invest their money in you if they don’t think you have any chance of winning. You also need to be able to sway public opinion by getting people to trust the image you put out. You can’t do this in Nigeria if you’re not a political insider. Good luck getting people to take you seriously if you haven’t been a governor or a senator before. And good luck becoming a governor or a senator if you are less than 45. By the time you’re done with your customary 8-year tenure, you’ll be 53 – one year below the average life expectancy in Nigeria. You don’t need to look too far to know the value that Nigeria’s political sphere places on youth. Look at the young people around President Buhari, most of them are filling new media roles (fancy lingo for social media management).

Another reason why there are no realistic young presidential candidates in Nigeria is that the current crop of youth is largely ignorant or ill-informed about Nigeria. Growing up in a system that has no value for history, where History, as a subject, has long been pulled out of schools, where any knowledge of their nation’s past is built on single stories told to them by their parents and relatives. With a poor knowledge of history, it’s hard to put a lot of things in context and think expansively about whatever is happening around you. Only a poor knowledge of history and inability to put certain things in context can make anyone believe that a leopard can change its spots. Sadly, this is the condition in which many Nigerian youths find themselves.

Put all these together – the cultural barriers, the lack of political pedigree, the poor educational system – and ask yourself what other choices the youth have but to rely on old men with “political experience”.