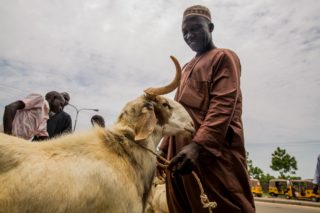 What happens when Muslims are unable to celebrate Eid?

Long ago, according to the Holy Quran, Allah instructed the Prophet Ibrahim to sacrifice his son, Ismail. In swift obedience, he prepared his son for the sacrifice, showing his total submission to Allah. But, just as Ibrahim was about to perform the sacrifice, Allah provided a ram to be sacrificed in place of his son.

Every year, Muslims commemorate Ibrahim’s willingness to sacrifice his son in obedience to Allah’s command by celebrating Eid-el-Kabir/Eid al-Adha, which translates as the “Festival of Sacrifice.” As the name denotes, Eid-el-Kabir is marked by the sacrifice of a camel, ram, cow, or goat. The sacrifice is the most significant part of the celebration. So what happens when socioeconomic factors make it difficult or impossible for Muslims to observe Eid?

Last week, The News reported that an unusual coalition of Muslim and Christian clerics in Kaduna toured animal markets pleading with ram merchants to lower their prices so that Muslims could celebrate Eid. Ram prices have risen in many states across the country, including Jigawa, Abuja, Ibadan, and Lagos.

Other ram merchants cite insecurity as the primary reason for the price increase. In Nigeria, the majority of livestock is concentrated in the north. This livestock is often transported to other parts of Nigeria for sale. But the alarming level of insecurity has disrupted agricultural and commercial activities in the north, causing the price and transportation of livestock to skyrocket.

Ayo Bello, a merchant who buys and sells rams on request, told Ventures Africa, “Because of the insecurity, getting trucks to transport rams from the north is tedious and costly.” Transportation used to cost him N1,500 per ram. Now it costs N3,500. Bello also iterates some of Idris’ sentiments regarding the cost of feed. The long-sized feed he bought last year for N5,700 now costs N10,200. Sorghum, an important feedstuff for livestock, has also increased from N6,000 to N11,000.

Ene Demide, an Abuja-based Muslim faithful, finds it outrageous that the ram she purchased three months ago for N150,000 has skyrocketed to around N300,000. According to her, this breed of ram would have sold for about N120,000 last year. She also cites insecurity as a major cause of the nationwide price increase.

Worse, residents of livestock-rich areas are suffering the same fate as their counterparts in other parts of Nigeria. Ene’s friend in Gombe told her that the high cost of rams in Abuja and other areas where rams are not reared has affected the cost of rams in Gombe. Rams which used to sell for N80,000 – N100,000 in Gombe, now sell for N150,000 because of the nationwide livestock price increase.

This price increase shatters the hopes of Muslims in Nigeria. There is an air of sadness clouding the celebration of Eid in the country this year; many are not able to observe all the requirements of the festival. Ado Dorayi, a resident of Kano, told The Guardian that he had always offered a ram sacrifice and had done so for 20 years, but he cannot afford to this year. “We are trying to put body and soul together. Many families are thinking of what to eat. Salah would always come. Almighty God sees everyone’s heart and judges him accordingly,” he said.

This year, more people pooled money together to buy livestock as a group. Muslims like Ene, who often purchased livestock to gift family members and neighbours, could not do so to the extent they would have liked. Seeing the situation of things, Muslim clerics have admonished against borrowing to celebrate Eid, stating that Allah does not impose on His children whatever is beyond their ability.