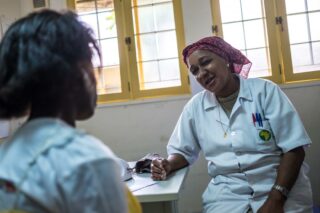 What are the costs of running a mental health startup in Africa?

“Uh, Honey, black people don’t go to therapy. We go to barbershops. That’s where we talk out our problems. Or we watch the movie Barbershop— one or the other.” This was one of the most iconic lines by Kevin Hart from the hit action-comedy, Central Intelligence. Comic as it may seem, the statement is also a fact. In the United States, the Confess Project became famous for using barbers as mental health advocates for black men since they hardly went for therapy. In Africa, however, the barbershop culture is not so common, even though the World Bank estimates that 100 million Africans suffer from clinical depression.

Despite the surging number of cases, most African governments spend less than one per cent of their allocated health budget on mental illness. Researchers found that there are only 1.4 mental health workers per 100,000 people in Africa, compared with a global average of nine per 100,000. This fact, plus the overall weak health infrastructure, means most Africans with mental health problems don’t get treatment.

Nguvu Health is one of the African startups using technology to bridge the continent’s health service gap. Founded in 2020 by Joshua Koya and Tolulope Ogunjuyigbe (not my relative by the way), Nguvu Health is an on-demand e-mental health therapy platform giving Africans easy access to quality therapy. Through its mobile platform, Nguvu Health connects users with licensed clinical psychologists via in-app messaging or video calls. The health-tech company was one of the African startups that made it to the 6th edition of the Google Startup accelerator program.

In a chat with Ventures Africa, Tolulope Ogunjuyigbe, co-founder of Nguvu health, narrates his journey into providing much-needed telehealth services. According to him, it costs a lot more than money to succeed.

Ventures Africa (VA): Tell us about yourself and how you started Nguvu Health

Tolulope Ogunjuyigbe (TO): I am Tolulope Ogunjuyigbe, co-founder and product leader at Nguvu Health. I am a professional product designer, and I have been doing that for over five years now. Joshua Koya and I have been friends for the past 20 years. We grew up in the same neighbourhood, went to the same secondary school, and both of our dads are professors at Obafemi Awolowo University (OAU). We’ve lived together and worked on several projects together —many of which failed.

(About Nguvu Health) During the lockdowns, around April 2020, Joshua reached out to me about improving access to mental health for Nigerians, Africans, and even people in the diaspora. At first, I thought it was another one of those projects that would not fly, but I couldn’t say no. I saw the passion in his eyes, and I had to hear him out. And then, I ended up liking the idea. It made sense to help people access mental healthcare remotely. It solves both the problems of accessibility and affordability at the same time. Therapy is still new to many Nigerians and Africans, even those in the diaspora. It’s much more popular in the western world and is very expensive. Many Africans in the diaspora see more white therapists around them who cannot relate to them at a cultural level. So they don’t have therapists that understand their cultural shocks.

VA: What personal experiences made you passionate about Nguvu Health?

TO: Before we started, I worked with a South African company. I sacrificed many offers to work with them, but our project wasn’t picking up. It became a real mental struggle because I was frustrated, and I had given everything to that work. It had become my life, but it wasn’t working. I wasn’t seeing a therapist, but I needed to talk to someone. Nguvu Health made me realise I needed to see one. As for Joshua, he’s a people’s person. He has always been the go-to person for many of his friends when they need to confide in someone. But when his sister in Germany struggled with her mental health, she needed a therapist, not just a confidant.

What we do at Nguvu Health is personal for us because the problem we are solving has, at some point, affected us as well as our loved ones.

VA: What have you discovered since you launched your startup?

TO: It’s been quite an interesting journey so far, and we’ve discovered a lot more than anticipated. Usually, when people start businesses, they consider competitors. But in our case, we’re competing with user education. There is not so much awareness about mental health over here. People talk to their religious leaders, spouses, friends or older people when they have problems rather than see a therapist. Some would try to pray it away. They don’t know when they need a therapist. They don’t even know when they have anxiety or depression. So we have a lot of work to do. People need to become aware, from the grassroots to the top. Government bodies need to get involved because private players can’t do it alone.

We also discovered that there is so much scarcity in our space. Most health-tech startups focus on pharmacy or general consultancy, probably because the stakes are lower. At least people know that they need medication for fever and other physical illnesses. Although a few startups are gradually coming into the space, we’re still not many. As part of our efforts towards increasing awareness, we launched a ‘free assessment’ feature on our platform. It covers a range of cases from depression to anxiety and substance abuse.

People are gradually becoming more aware. I mean, as of December, we recorded over 3000 tests taken. But at the same time, we are seeing many people try to self-diagnose using Google. So they already have opinions on what their problems are without seeing therapists. But at least we’ll take the win that more people are becoming aware. If they’re Googling it, then at least they know they need help.

VA: What has changed since you got into the Google Startup Accelerator?

TO: Getting into the Google Accelerator was massive for us. We got access to meet mentors who had gone through what we were going through. It also gave us access to funding and made people pay attention to us better. VC firms both in and outside Nigeria have reached out to us after that program. Being an alumnus makes people respond to you faster and boosts your credibility. It also gave us access to great talents, and since we had gained a lot of exposure from the program, we could work with them better.

VA: You’ve been a product designer for a while. What has changed about you since you became a co-founder?

TO: My experience is different from Joshua’s. He has always been a business person and has worked either in business strategy or business development for various companies. So he didn’t change as much as I did. I have to start adapting to a new style of living because I don’t enjoy public attention. I love to work in the background, and I still do that. Joshua and Juliet — our head of marketing — do more of the talking. But even at that, people know me, and I have to get used to that. I still have to show up when my attention is needed.

But more importantly, I understood startup building better. It’s easy to have opinions when you’re not in the system. Knowing that you’re building a product that would impact people’s lives makes you more responsible. As an employee, you may not be bothered when people complain about your product. But as a business owner, one complaint can give you sleepless nights. Yet, you have to be ready to receive complaints. My job used to be to design and let the developers handle the rest. But now, I have to be involved in everything. Being a co-founder also means being able to craft and tell stories. I’ve also seen the importance of collaborations, even with other startups. By interacting with them, you’ll find out that most of the things you’re experiencing are not peculiar to you. But overall, it has changed the way I view problems.

VA: If you could go back five years into the past, what advice would you give your younger self?

I’d say “be daring”. I’ve always been a strong-willed person. But even at that, I’d still tell myself to be daring. I’d say “Go for what you want. What’s the worst that can happen?”

VA: If a new startup founder came to you seeking advice, what would you tell them?

If a new startup founder comes to me seeking advice, I’ll tell them to be ready for the tears. You will probably have more tears than wins, and you have to be mentally ready for that. It’s not as rosy as people make it appear. No matter how good your idea is, be ready for disappointments.

Secondly, I’ll say “collaborate”. You don’t have to do everything on your own. Speak with people about what you’re doing and form partnerships. You’ll probably need to speak to everybody at some point.

Thirdly, trust your instincts, especially when you start speaking with investors. You need to know what you stand for or else you might have problems. Last year, we were speaking with an investor who wanted to give us about $200k. We needed the money at that time, but he was asking us for a ridiculous percentage of equity in the company. We had to stand with our vision and trust what we were building, so we left the table. Today, we don’t regret that decision. You need to trust your guts because you’re the only one who truly understands what you’re building. Seek advice, talk to people, but trust your guts.