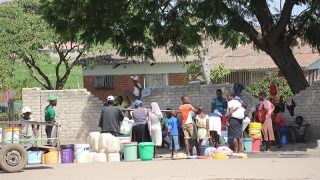 The shortage of clean and affordable water has become a threat to individual and public health in the troubled Southern African nation. The Chitungwiza City Council has been failing to provide water consistently to the area’s crowded townships for over eight months.

Before the drought began, water shortages were common in Zimbabwe’s capital due to decrepit infrastructure and chemical shortages. In 2008, Chitungwiza was the epicentre of a nationwide cholera epidemic linked to poor water sanitation. Now, residents are fearful of the life-threatening conditions the current water crisis could create. Five years ago, after the Export-Import Bank of China extended a $144m relief loan facility to the Zimbabwean government to modernize Harare’s water and sewer works. Despite the loan, not much was done to salvage the situation as on $72m which still showed no much impact. The Chinese government, however, withheld the rest of the loan due to reports of corruption and mismanagement of the funds by the Zimbabwean government.

Zimbabwean President Emmerson Mnangagwa reportedly appealed to his Chinese counterpart President Xi Jinping to unlock the rest of the funding, but Harare government spokesperson Micheal Chideme says that the rest of the loan has yet to materialize.

The increasing water shortage joins the numerous challenges Zimbabweans are already grappling with. From a foundering economy, soaring inflation and growing food insecurity to a deeply compromised public healthcare system.

This irregular flow of water is rooted in a severe drought that began in 2018. Chitungwiza residents are now faced with a difficult choice to either queue at a borehole, or buy water at extortionate prices. As some of the area’s more affluent residents have hired private drilling companies to sink boreholes on their properties to pump and sell water to their less-fortunate neighbours.

A recent report by Zimbabwe Peace Project recorded a truck in Chitungwize selling buckets of water for 1.50 Zimbabwean dollars each ($0.0625). But since most of the boreholes use electric pumps, prices can double when the power is out and blackouts can last up to 18 hours a day in some parts of Zimbabwe.

Access to clean, potable, affordable water is essential for maintaining individual and public health. This is why barriers to obtaining safe water are bound to have a negative economic and social impact. Already, citizens are scrambling to get enough clean water to drink, prepare meals and attend to basic hygiene. Not just that, women and girls are forced to spend long hours queuing with many youths unable to study because a bulk of their free time is spent waiting for water. This also affects their safety and has reportedly increased the rate of immoral acts at night.

In September 2019, Harare Deputy Mayor Enock Mupamawonde called on the government to declare the water shortage a national disaster, saying the local authority needs at least 40 million Zimbabwean dollars ($2m) a month for water chemicals. The municipality takes in only 15 million Zimbabwean dollars in revenue each month. And until the crisis abates, people will have little choice but to queue for water at a community borehole.