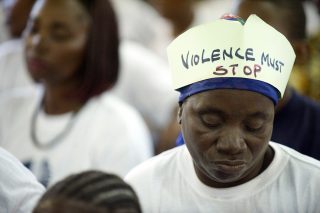 Vaccinating the shadow pandemic: Notes from the 5th edition of Oando’s webinar series

Speaking on the prevalence of gender-based violence in the country, the panellists noted that cases of violence against women and girls increased with the commencement of the COVID-19 lockdown last year. Hence the term, “shadow pandemic”, because while the world focused on containing COVID-19, a different pandemic was growing, fuelled by the measures put in place to check the spread of the virus. A report by Premium Times puts reported cases of violence against women and girls at 717 between January and May 2020.

Drawing on her experience of over two decades in the public sector, Dr Kemi DaSilva-Ibru talked about disenfranchised women she has come in contact with, in public hospitals. She talked about having to perform reconstructive surgeries on abused minors and 60-year-old women who were assaulted in their homes. In a bid to address the infrastructural deficit, Dr Dasilva-Ibru decided that she would establish an organisation with clearly established guidelines and a deliberate mandate to address issues of gender-based violence. She established WARIF in 2016.

Speaking on the issue, Dr Tomiwa Erinosho said that an overflow of reported cases of GBV during the lockdown drove his team into action. However, curfews and restrictions on movement due to the pandemic made access to locations difficult. “In recognising that we had limited resources, we had to spread our resources across limited people,” he said.

Prevalent limitations in the fight against gender-based violence, as pointed out by Dr Ibru, include a lack of healthcare infrastructure,  incohesive and antiquated laws, and ill-equipped law enforcement agencies that are not sensitized to handle gender-based crime. “You have laws, policies and lawmakers that don’t address your problem front and centre. So what do you do? These are some of the challenges survivors of gender-based violence face daily.”

Legal challenges: The major legal hurdle in interpreting and prosecuting these offences stems from the legal framework adopted by individual states in Nigeria. A document on the VAPP act identifies that the act applies only to the FCT. Another situation presented is how the states have interpreted the Nigerian Child rights act.

Since its enactment in 2003, the Child’s Rights Act has been fully implemented in only 25 states of Nigeria. Enugu was the last state to adopt the legislation. A report by Thisday identifies 11 remaining states that are yet to appropriate this legislation. They include Adamawa, Bauchi, Borno, Gombe, Jigawa, Kano, Katsina, Kebbi, Yobe, Sokoto, and Zamfara, all located in Northern Nigeria. Most of the northern states contend that the child right is at variance with their religious tenets.

Although advances have been made in the use of technology to assist in the prosecution of gender-based crimes, there is still a lot of that work that needs to be done in the areas of legal support for survivors, and the recognition and protection of survivors’ rights and dignity. It is equally important to ensure that the process for reporting and prosecuting gender-based crime is seamless and retains the humanity of the survivors while communicating the relevant details.

Social challenges: Society needs to draw a firm line on issues of abuse and violence against women. Questions about a survivor’s dressing at the time of assault are offensive and insensitive. They demean survivors, blaming and shaming them instead of the perpetrators. “We need to recognise the challenges that have led to the problem, for us to address the problem. One of the fundamental challenges that we face is a shared lack of awareness. We touch on the fact that we are a patriarchal society, we didn’t touch on the fact we are very cultural. We have cultural practices that encourage harmful acts against women. We have enabling communities that shame survivors of these acts of violence,” said Dr Ibru.

Infrastructural challenges: Some states have shown their commitment to the provision of justice for survivors of GBV. Lagos state has made considerable investments in this space including in the construction of a forensic research facility. Other states have made their contributions but generally, more needs to be done. Women at Risk Foundation (WARIF) established a call centre to assist in managing survivor requests, providing information and access to counselling and emotional support.

The economic impact of gender-based violence transcends figures. It spills into the domains of emotional trauma, stigmatization, an impediment to education and loss of employment opportunities, therefore, ongoing conversations around gender-based violence are necessary. All stakeholders must commit to a future where equality and inclusion creates a level field that protects women and children from all forms of abuse. Even as the government has established a task force to combat issues of domestic violence, there needs to be extensive public dialogue aimed at changing negative stereotypes prevalent in our society. We also need to address cultural norms that enable the perpetrators of these heinous crimes.