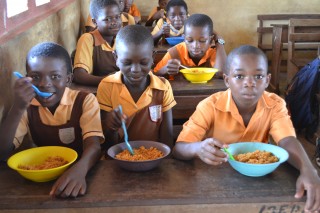 UN reveals why school meals project in Mali must continue

“Hungry people cannot be learning or producing anything, except perhaps violence.” – Pearl Bailey

On Tuesday, the United Nations World Food Program (WFP) revealed that about 180,000 pupils in Mali will be out of school if it stops the school meals program. This came after the UN agency complained of a lack of funding to continue the program in Mali.

According to WFP’s country director in Mali, Silvia Caruso, school meals are the only nutritious meals Mali children receive in a day. He stressed that the program motivates parents to send their wards to school and also keep pupils in school. He later stated that the agency needs about $3 million to resume its school meals program in Mali.

He added, “We urge our supporters not to forget the children of Mali. Going to school helps them regain their childhood, and school meals play an important role in keeping them in school. $3 million is urgently needed to resume the school meals program.”

Since 2012, WFP and its partners have been able to provide school meals to an average of 170,000 children per year in the conflict struck northern and central Mali.

Prolonged insecurity and shortage of rainfall have led to incessant food security crises in Mali. UN report stated that more than a quarter of the population suffer severe food insecurity since 2010. In light of this, WFP partners with local farmers to buy fresh food for its school meals program.

Generally, Mali has been rated as one of the nation with the highest levels of food insecurity. The report stated that 15 percent of Mali children suffered from acute malnutrition and 69 percent of Mali’s population lives below the country’s poverty line. In addition, a national survey in 2014 revealed that average prevalence of global acute malnutrition (GAM) in children under five stands at 13 percent. This is a critical situation as World Health Organization rates a GAM prevalence between 10-14 percent as serious, and above 15 percent as a critical emergency.

In a bid to achieve the second and fourth Sustainable Development Goals (SDGs), states governments as well as Non-Governmental Organisations (NGOs) need to support WFP’s feeding scheme, which will prevent malnutrition and ensure quality education for the children in Mali. With huger, learning will be very difficult for the children and this will raise the illiteracy level in the country.

It is also necessary to note that if these children are not in school, they might be victims of terrorist group recruitment which will pose a security threat to the state. Academic journals have shown that Al-majiris (poor children) in the northeastern Nigeria were being recruited by Boko Haram insurgents who consequently used them as suicide bombers.

Thus, WFP’s school meals program is a means to achieve various ends and it should be supported for the progress of the West African nation.