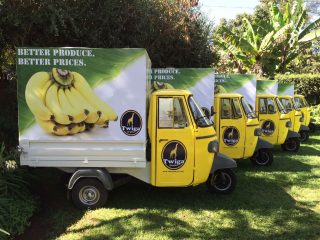 Kenyan-based food distribution company Twiga Foods has decided to suspend plans to expand into the West African region, chief executive Peter Njonjo has said, as the startup shifts its focus to markets within East Africa for now.

Twiga operates a business-to-business marketplace platform that sources produce directly from farmers and delivers it to retail outlets, kiosks, and market stalls. The mobile-based and cashless supply platform quickens delivery and distribution to the millions of small and medium-sized vendors in urban markets while helping farmers reduce post-harvest losses on fresh produce.

It has secured more than $67 million in debt and equity funding since launching, the latest of which was a $30 million Series B raise from lenders and investors led by American banking giant Goldman Sachs and the International Finance Corporation last October.

The Nairobi-based firm had planned to invest the funds in expanding into more cities in Kenya while aiming at a pan-African expansion by the third quarter of this year. But those plans are “impractical for the moment” due to travel restrictions and quarantine requirements in the wake of the coronavirus pandemic, Njonjo told The Africa Report.

Any foreign expansion, for now, will focus on countries bordering Kenya, the CEO said. The immediate plan is to scale up in Kenya – Twiga wants to set up in the country’s third-largest city Kisumu by next month after which it will enter “two or three” more Kenyan cities by the end of 2020.

The shift in plans is “a short-term change of emphasis” and Twiga is “not walking away from our plans to expand across the continent,” said Njonjo, noting that Africa still has a “$300 billion problem to be solved” in terms of food access.

More so, West Africa remains a “sizeable opportunity” for the company due to its higher rates of urbanization compared with the east, noted Njonjo, a one-time president for West and Central Africa during his 21-year time at Coca-Cola.

Twiga has been operating all through the pandemic, being classified as an essential service by the Kenyan government. It has been able to retain all its employees and that should be the case for “the foreseeable future,” according to the CEO.

But the startup will “definitely” need to raise money to expand its footprint, Njonjo added. The plan is to “synchronize” the new fundraising, expected within the next 18 months, with the opening up of African markets once the COVID-19 pandemic tensions have eased.

Co-founded in Nairobi in 2014 by Njonjo and Grant Brooke, Twiga Foods serves around 3,000 outlets a day with produce via a network of 17,000 farmers and 8,000 vendors. It allows parties to carry out goods exchanges through mobile apps using M-Pesa mobile money for payment.

From an initial focus on agricultural goods and connecting the produce of farmers to marketplaces, the company has since created additional revenue streams by moving into the B2B supply chain for Fast Moving Consumer Goods and other consumer products.