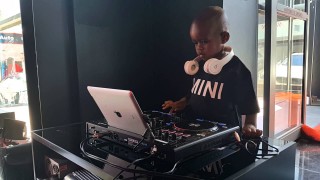 Three-year-old, DJ Arch, wins SA’s Got Talent. Here are some of his contemporaries

DJ Arch Junior, the three-year old that wowed both the judges and the audience at the South Africa’s Got Talent auditions earlier this year, has beat five other finalists to emerge the winner yesterday. This makes him the youngest person ever to win the competition, as well as the youngest DJ on the planet. The talented toddler gained initial recognition with his deejaying through YouTube videos which his dad, Glen Hlongwane, posted.

The winner of a 25,000 pound cash prize, who played his way to the bank with his skillful last set, received much guidance from his parents throughout the competition. They are really excited and are reported to be making plans to put his win into a trust fund for his education and improving his living conditions.

Arch Jnr, as he is also known, now has about 100,000 Facebook followers and is set to become even more popular.

Although this is the first win of its kind in the world of talent competitions, DJ Arch is one of many talented kids his age around the world who have stolen the hearts of judges and audiences, while equally proving their mettle in other variations of the same competition, as well as in others.

Earlier this year, in June, five-year-old Heavenly Joy Jerkins, who was probably the cutest thing alive at the auditions, received a standing ovation at America’s Got Talent, for her singing/tap-dancing performance of “In Summer” from the Disney animation Frozen. She instantly became a favourite, even though she did not win. Last month, she performed at the 2015 Sally Awards.

Three-year-old Zhang Junhao was too-adorable-to-handle at China’s Awesome Chinese reality show last year. At his audition, he danced to random songs, and went on to become one of the most popular competitors on the show. According to the wise young man, his mum says dancing is happiness, and so he dances to make people happy, because he is happy.

Back in 2009, two amazing kids, 7-year-old Ura and 6-year-old Karina, left everyone stunned at the Ukraine’s Got Talent competition auditions with their ballet-inspired acrobatic moves, despite being “a little” worried about their performance initially. They made it as far as the semi-final stages, before having to bow out of the competition.

Although this kid was not in any competition, his talent cannot go unmentioned.

DJ Arch Junior and all of these other spectacular kids received the most support from their parents.