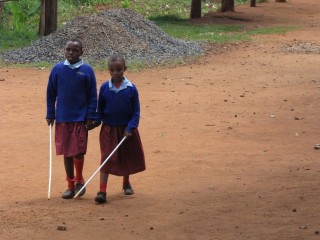 The Portable Eye Examination Kit (PEEK) has just been launched in Trans-Nzoia, Kenya, by the London School of Hygiene in partnership with several Kenyan doctors. PEEK uses smartphone technology to look inside the eye and carry out various tests including visual acuity, colour and lens vision as well as retinal imaging. After a child’s impaired vision is detected, the actual vision difference is shown on the phone’s screen while a parent and the school head teacher receive an automatic SMS asking them to present the child for treatment.

PEEK will be used to detect early signs of eye defects in school children. The initiative is sponsored by Standard Chartered Bank as part of its ‘Seeing is Believing’ initiative, as it has invested $350,000 (about Sh35 million) in a three-year programme to screen pupils in 350 schools in Trans-Nzoia.

Blindness in Kenyan children appears to be an existing challenge. In 2015, a Kenyan ophthalmologist, Prof. Geoffrey Simiyu, reported that many children are blind in the country. “More than 300,000 Kenyans are blind and about 16,800 of them are children, making eye diseases one of the top 10 causes of morbidity and subsequent loss of productivity,” he said.

For now, the innovation will only be used in the Trans-Nzoia county in Kenya, however, there are plans to spread the initiative to other parts of the country. The statistics for blindness from Trans-Nzoia could be the reason for being the starting point of the initiative. According to Dr. Hilary Rono, a co-founder of the app, out of the 2.5 million people in the region, 80 percent have eye problems that, if not checked, would lead to avoidable blindness. Five in every 1,000 people in the region are blind.

PEEK has already been used on 21,000 school children in the district and 900 were found visually impaired and were referred to the Kitale County Hospital Eye Unit for treatment.

The high demand for childhood eye services and health personnel was what informed the innovation, which can be used by teachers with minimal training. PEEK will serve as a major solution and preventive measure in tackling disabilities in Kenya as there is still no adequate and sustainable plan for disabled people in Africa. As disabled persons still struggle to be properly integrated into society, it is better to have innovations like this to detect disabilities in the making, to avoid future exclusion from societal life. Like Dr. Rono rightly said about the app, “If visual impairment is not identified and managed at an early age, it can result to under-achievement in school and possible societal exclusion later in life.”