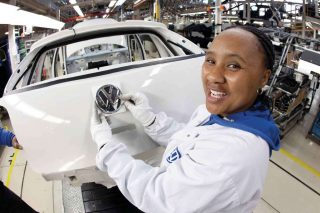 “We are trying to break this thought-pattern that Africa is poor; they can’t afford (new) cars,” Thomas Schaefer, Managing Director of Volkswagen in South Africa told Reuters, when the company made this announcement, and talked about the motivations for the new assembly plant in Rwanda.

Africa is indeed rich, with minerals too, and experts have given exactly that reason for why Volkswagen has settled in Rwanda. Cobalt is one of the most important components of electric cars, a mineral that is found in excess right around the corner in the beleaguered Democratic Republic of Congo. Volkswagen is working on a tight schedule to become the world’s biggest electric car maker by 2025. The rush for Africa’s resources aren’t over; they are just under new pseudonyms. However Volkswagen vehemently denied it as the reason why it was opening an assembly plant in Rwanda.

Three models of Volkswagen cars will be produced in Rwanda; the Hatchback Polo, the Passat and the Teramont. Along with selling these cars in Rwanda, Volkswagen also plans to introduce a ride-sharing service using Volkswagen cars. These services will produce jobs for about 500 to 1000 Rwandans, along with roles in the assembly plants too. The ride-sharing service will necessitate more demand from the assembly, since the cars will always be in use, the company said.

Ride-sharing services are becoming important for Africa’s teeming population, especially its millenials; there are around sixty ride-sharing services around the continent. Due to the pandemonic state of public transportation in much of Africa’s major cities, riding-sharing services have become a part of the transport scene on the continent, while also fast-tracking innovations in Fintech and mapping technology, many driven by Youths. The company’s ride-sharing plan is a good piece of business, and should be replicated in other African countries, especially where Volkswagen assembly plants are already present.

The Volkswagen emission scandal, in which the German company was accused of installing devices in their diesel cars that released less emissions when they were tested than when they were on the road, has surely necessitated the search for more frontiers for the company. A decline in market shares in Europe, and the latest scandal involving tests on monkeys meant that the company was going to explore emerging markets sooner or later. Well, it is hoped that the relationship goes well in Africa.