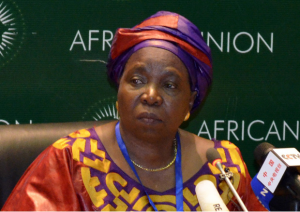 The 63 year-old veteran apartheid fighter became the first AU leader after a hotly contested election which ended in a tie in January; leaving 69-year-old incumbent Jean Ping of Gabon in power after the Francophone Africa community firmly supported Ping while the Southern African Development Community firmly stood behind Zuma. Neither side could secure the necessary two-thirds majority to win the election.

Yesterday’s election took place in Addis Ababa, Ethiopia. She was elected by the 54-member pan-African bloc.

Nkosazana Dlamini-Zuma is the ex-wife of South African President Jacob Zuma. She has served on every South African president cabinet since Nelson Mandela became the country’s first black leader.

Under the Mandela administration, she served as the Health Minister and helped to transform the country’s segregated health system. She is remembered for introducing legislation that overhauled the highly unequal system and gave the poor access to free basic care.

She went on to become Foreign Minister for a decade, earning praise for her shuttle diplomacy to end the war in the Democratic Republic of Congo.

As an interior minister under her ex-husband administration, she was praised for turning around a ministry mired in gross mismanagement to achieve the first clean audit in 16 years.

On assuming the position as the leader of the union, Dlamini-Zuma will have to deal with the aftermath of recent coups in Guinea Bissau and Mali. Ping has been criticised as being slow and ineffective in his response to last year’s coup in Cote d’Ivoire and the revolution in Libya.

In her campaign to win the pan-African bloc’s top job, she vowed to work at making it “a more efficient and effective organisation.”

Known for her competent management and stern personality, Dlamini-Zuma was born on January 27, 1949, in the eastern province of KwaZulu-Natal.

Although she later trained as a Doctor, Dlamini-Zuma took up politics in high school.

In the 1970s she went into exile, and studied in Britain at the universities of Bristol and Liverpool, while helping to organise anti-apartheid movement overseas. When the ban on the African National Congress was lifted in 1990, she returned home.

Keith Gottschalk of the University of the Western Cape describes her as “an astute politician, a veteran, the experience she acquired as foreign minister puts her in good stead to take over this role.”

Mehari Maru of Institute of Security Studies in Addis Ababa said, although Zuma is a more “professional, more accountable and more proficient” person than Ping , she warned it would likely take months for a change in leadership strategy to take place.

Meanwhile, having ousted incumbent French-speaker, Jean Ping of Gabon, Zuma has refused to be labeled an English-speaking candidate.

She stated that while performing her role as the AU head, she would be “implementing programmes… agreed upon by everybody” rather than “consulting the Anglophone and the Francophone.”