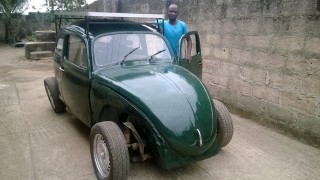 Segun Oyeyiola, a student of Obafemi Awolowo University, in Ife, Osun State, Nigeria, has converted a Volkswagen Beetle, using mainly scrap parts donated by friends and family, into a $6000 wind and solar powered car. He describes his creation as “Nigeria’s future car.”

The reinvented vintage Beetle comes fitted with a giant solar panel on the roof—exploiting Nigeria’s abundance of sunlight—and a wind turbine under the hood that takes advantage of airflow while the car is in motion. Also, to ensure the car does not clasp under the added weight of the installed technologies, it comes with an extra-strong suspension system.

The car is still in the early stages of design, and still requires a lot of work to reach the optimal target (the batteries for the solar panel take four to five hours to charge). However, now that Segun has succeed in building a working prototype, he plans to take his final university exams and then get straight back to working on the eco-friendly car.

His concern for the environment has always been his motivation, this has helped him dedicate much of his time and resources to creating the automobile despite many critics labelling his pursuit ‘a waste of time’. “I wanted to reduce carbon dioxide emission[s] going to our atmosphere that lead to climate change or global warming which has become a new reality, with deleterious effect,” he said. “Seasonal cycles are disrupted, as are ecosystems; and agriculture, water needs and supply, and food production are all adversely affected.”