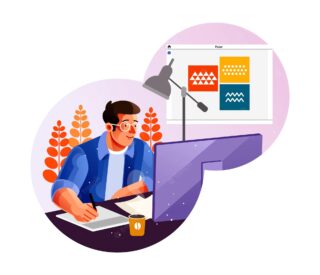 My Pivot Journal: This photographer went from shooting models to brand design and tech analysis

When Harmony started learning design, he paid almost N10,000 ($24) for mockups, a design template meant to be free. He had just sidelined a career in mobile photography and cinematography to pursue a career in design. Today, Harmony not only designs for top brands, he also offers technical advice to tech companies on web and mobile products.

Although Harmony studied business administration at Anambra state university, his career started behind a camera lens. “I used to take photos with my phone, and had started doing photography full time before I got into school,” he says.

He went on to build a career in mobile photography and cinematography. His photos were featured on platforms like World Mobile Photography. Harmony also got a shot at fame after a particular model shot. “I had done a photo shoot of a model with just my phone. It came out great. That shoot made me popular in Port Harcourt,” he recalls.

Although Harmony was getting recognized for his work, he couldn’t afford to further his photography and cinematography career. “It was so expensive to get a good laptop and photography gear,” he says. So Harmony began to think of what else he could do using his phone.

“When I used to edit my pictures, I made some friends who were brand designers. It always looked fascinating,” he says. “It felt like something I could try.” So Harmony decided to learn brand design. He started by creating basic designs on his phone. He would try re-making logos of popular companies. “The first design I did was of MTN, then I did an NNPC logo,” he recalls.

Harmony soon realized the perks that could come with a career in brand design.  “Design was different from photography,” he says. “It was easier to get jobs. With photography, it was harder because you have to be a professional to book good-paying jobs,” he adds.

Eventually, Harmony got a laptop. But he decided he was not going back to photography. He would focus on design.

Harmony credits YouTube as his first tutor. “My design friends were quite helpful. I could always ask them about things I did not understand. But I would say I learned most things about design from YouTube,” he says. He started designing with CorelDRAW and watched YouTubers like Ahsan Sabri, a CorelDraw YouTuber. He also used websites like Freepik and Pngtree to get free images and files. He would follow and get resources from designers like Johnny Montage and icreate on Instagram.

Harmony started taking free design jobs just so he could have hands-on experience. “It was during that period I did some designs for my church,” he recalls. After three months of intentional learning and practice, Harmony got better at design and started taking paid jobs. “At first, I would take jobs and have my friend who was a better designer do it. Then we would split the profits,” he says. “Eventually, I started doing the jobs myself.”

After a few jobs, Harmony decided to get more hands-on experience in design. He got a job at App Plus Solution, a design firm, so he could learn closely from other designers. “There was always an influx of jobs, so every day I learned something new. And there were lots of designers to learn from. It was there I learned about branding. And how to measure designs for flyers, billboards, and even receipts,” he says. “These were the kind of jobs I would not get working on my own at that time. However, working in a company that worked with different brands, gave me that experience. I even got to work with big car companies,” he adds. Harmony worked there for a year, earning N1,000 daily.

But not all the developers Harmony encountered were willing to share their knowledge. “The first time I heard of mockups, which is a prototype or full-size model of a design or device used for teaching, demonstration, or design evaluation, a designer had sold some to me. I got five mockups and paid about N10,000. I was a novice. I found out I had been duped when I was working with another designer and we wanted to use mockups. I asked him if he had bought his. He said he would just download it later. I kept saying he had to buy it to use it. We argued for a bit until he showed me proof from the internet. It was painful to learn I had been duped,” he says.

Harmony’s design skills have since improved. He has had to evolve with the latest design tools and technology. “I started as a Coreldraw designer. But I had to move to the Adobe family as I progressed,” he says. Adobe is an easier tool and has more features,” he adds. But it took a lot of humility for Harmony to move to Photoshop Adobe. According to him, Coreldraw designers are known as the “manual drivers” of the design world. With Coreldraw, the design is done from scratch. For example, with Coreldraw, you have to create the background of any design. But with Adobe, one can import any background from the internet. “The good thing with starting from Coreldraw however is that I can design using both Coreldraw and Photoshop. Whereas photoshop designers can only use photoshop,” he says. “I would advise incoming designers to go straight to photoshop though. Because it is a better tool for design,” he adds.

Harmony works as head designer, Swirge, a decentralized social media marketplace and payment platform built on the blockchain. Harmony also started his company, Harmonicz studios, an online company focused on creating designs for web 2 and web 3 companies. “In a week I have not less than 20 meetings. I work with different teams designing different projects,” he says.

Recently, his company also started web development for brands after he observed that many brands were requesting website development alongside designs. “I discovered that people needed a company that would be able to solve all the problems they had. If we kept outsourcing the website development jobs, these companies would not come back,” he says.

In 2020, Harmony extended his skills to include technical analysis in his portfolio. “There were times when I would be conversing with a web developer and I had no idea what they were talking about. One scammed me. So I decided to take a technical analysis course on YouTube,” he says. As a technical analyst, Harmony can analyze a website or any technical product and proffer solutions. He understands how to communicate with a developer, what technologies are used to build tech products, and how websites and mobile applications are built. “I can build a product technically with my mouth. I can recognize a website that was developed using react or tell you how a website’s data needs to be curbed from the backend. The only thing I can’t do is to code,” he says. As a technical analyst, Harmony has worked with AFEN blockchain, Swirge, and Artmemoir.

“In as much as learning from YouTube and Coursera is cool, nothing beats learning from a fellow designer. I discovered I learned more from working with people and working amongst teams than any other means,” he says. “Also you don’t necessarily have to learn coding to work in the tech space, especially in the web3 space. Just find what works for you and go with it.”