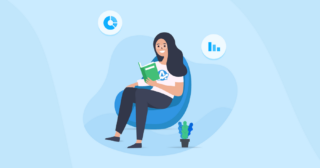 My Pivot Journal: Augustina Okonkwo learnt how to tell fun stories with data

Growing up, Augustina Okonkwo wanted to be a techie, but she wasn’t sure which road to follow. But that didn’t go according to plan, as life took her into other fields, making her explore different paths. Today, that journey has come full circle as her experience, hobbies, and skills find expression in data science.

Before going to the University, Augustina wanted to be a computer scientist, even though she barely understood what it entailed. According to her, she “just wanted to work with computers”. So she applied to study computer science at the University of Nigeria, Nsukka. But that didn’t happen. Instead, she found herself studying mathematics. “For the four years I spent learning mathematics, I was angry,” Augustina told Ventures Africa. “I have always been good at mathematics but never saw it as my career line.”

After school, Augustina was uncertain of what to do with a degree in mathematics. “I started Googling places a mathematics graduate can work and saw a lot of data-related careers. It looked interesting, but then I didn’t understand it, so I didn’t take action.”

Her first job was as a customer service representative at VSP Botanics, a beauty supply brand. “I enjoy solving problems and helping people, and that was primarily the job in customer service. I blended in so well that I became the go-to person for several customer-related issues.”

Augustina started her new role with plenty of enthusiasm. She thought she was gradually carving out a career. “When I started the role, I was good at it. My boss used to commend me for being a fast learner.” But her quest did not end as planned. Her vigour soon turned sour when she realised the role required much more pace and energy than she envisaged.

“The role became too challenging for me,” she stated. “I often got sad and nervous on the job because I couldn’t meet targets. I don’t like being subpar, yet I felt like that often, so I wasn’t enjoying myself anymore.”

One year after joining Fortizo oil and gas, Augustina quit her job. “I took a break from work altogether,” she said. “I saw that this business development thing wasn’t for me and needed to take my time to figure out what next to do.”

A few months after her resignation, Augustina stumbled on an ad for data analytics training on her Instagram feed. Before then, the tech frenzy was already catching up with her, but she wasn’t sure where to start. “People kept asking me to learn frontend/backend development, product design and so on,” she said. “I felt those areas were saturated because they were the first things people mentioned about tech. Besides, I didn’t see myself building websites for people.”

When she saw the ad for data analytics, she remembered how it was a top Google result for careers suitable for mathematics graduates. It seemed like a good idea to finally put her math prowess to good use.

Augustina’s learning journey didn’t start smoothly. She didn’t have a laptop to practice with. So even though she enrolled on data science Bootcamps, she barely got far with them. “I got discouraged, to be honest,” she said. “I found it hard to concentrate.”

However, in March 2022, Augustina’s interest in data was rekindled, and she decided to take it more seriously. This time, she drafted a plan, giving herself a six-month ultimatum to land her first job as a data scientist, or at least know enough to apply for jobs. “I started by picking up the IBM data science course on Coursera,” she said. “A few weeks later, I applied for Ingressive for Good’s Datacamp scholarship and got accepted. That gave me free access to every paid course on Datacamp.” She still didn’t have a laptop. But this time, she didn’t let it stop her. “I was determined to make it work this time. So I was glad when I found out I could start coding with my phone.”

Her transition did not stop at taking courses. Augustina started making friends and talking about her learning on Twitter. “I’ve had that Twitter account since 2013, but I wasn’t using it. So I came online and started documenting my journey publicly. It felt like I was teaching myself in front of everyone.”

Augustina started working on self-administered projects to build a portfolio. But she wanted to have fun doing it because she “gets bored easily.” So Augustina decided to use data to talk about her hobbies: sports, TV shows she watched, books she read, etc. “There is data in everything,” she said. “Even our conversations have data.”

At first, she started by imitating and improving on what people had already done on the internet. In June, her work started getting recognised.

It took a lot of courage to post this as there’s been a lot of beautiful Nobel Prize dashboards on the internet in the past couple of weeks.

Here is my own representation of the Nobel Prize Winners.

I love criticisms as I am still learning, please let me know what you think. pic.twitter.com/uaZtpJHoOO

Augustina started getting more creative and kept practising. Then in June, her first big break happened when she posted her data representation of tweets on the Real Housewives of Lagos. “I had watched the whole show. I knew every story and had even argued with my friends about it. I would also come online and read the banter on Twitter. So I thought it was an interesting case study to analyse.”

I carried out an analysis of over 170k+ tweets relating to the Real Housewives of Lagos reality TV show using python and I created this dashboard with Power BI.

“I suddenly started getting a lot of DMs and attention on Twitter,” she said. “People were impressed with what I had done and could relate to the data I represented. The funny thing is I worked on it with a borrowed laptop.” Then FanBants, a Nigerian fantasy football and reality company, reached out to her, offering her first tech job as a data analyst.

Augustina has barely spent 5 months in the data space. But she has secured her first job and grown a once dormant Twitter account to over 4000 followers. However, she admits there’s still a lot to learn. “I’m still taking courses and getting certifications from top companies like Microsoft,” Augustina said.

She also admits that transitioning to tech has altered her sleep schedule. “Many days, we won’t have power until late at night, so I was always taking my courses and practising at midnight. Now I’ve gotten used to staying awake, even when I don’t want to.”

Nonetheless, Augustina is more encouraged to keep building her portfolio around fun topics. “I’ve learnt to work on projects that resonate with people and tell stories they care about. In this field, you should either be solving problems or having fun, or better still, do both.”

Augustina, who is also a football lover, now looks forward to telling sport stories with data.

“Keep showing up every day. There are many days you won’t feel like going on. You might get tired or bored, but show up regardless.”