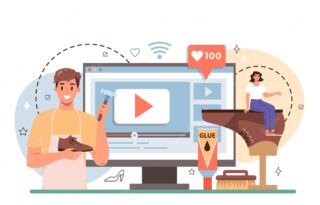 My pivot journal: A shoemaker’s self-taught journey to product design

Akorede Ayanbisi is making a name for himself as a product designer. But he didn’t grow up wanting to be a tech bro. This career path is a product of a decade-long backstory of constant self-reinvention and adaptation. Here is Akorede’s pivot journal.

After completing his secondary education in 2011, Akorede wanted a career in Finance, but it didn’t take off immediately. “I wrote JAMB three times without getting admission,” Akorede told Ventures Africa. “I was getting frustrated, but I didn’t want to sit idle. So I went to a roadside shoemaker, who worked nearby, and started learning the craft.”

Some people thought I was capping when I said I used to be a shoemaker. 😅

Thank God for his blessings so far. My journey to becoming successful hasn’t been an easy ride, I literally did everything legal to make money.

In 2014, shoemaking became his full-time trade. But he knew that wasn’t his final stop. “I took JAMB again but still didn’t get admission. So I went to study Accounting at the National Open University (NOUN).”

Akorede had barely settled into NOUN when he found a new business opportunity—printing. At the time, his goal was to be able to fund his education, and shoemaking wasn’t enough. “I saw people helping potential students print out their admission letters, course forms, course materials, etc., and they were making a lot more money than I did as a shoemaker. So I teamed up with some people and started doing the same.”

But at the same time, Akorede was seeking exposure. So he always had his ears on the ground for workshops/events that could expand his mind. “I can almost say there was no conference/seminar/masterclass happening on Lagos Island that I didn’t know about and attend. It didn’t matter what the subject was. I just wanted to learn and meet people. Even when I couldn’t afford the transport fare, I’d leave home early and walk the distance. That was where I really built soft skills.” He did this for three years before closing the shop in 2017. “The shopping centre where our business was situated got relocated. So business crumbled for a lot of us,” he said. “I had spent all my savings trying to leave Nigeria, and it didn’t work, so I needed to take odd jobs for a while before getting a digital marketing internship at E-knowhow Solutions.”

Akorede’s internship gave him his first taste of velvet when his job assigned him to handle famous comedian Ajebo‘s social media. And even though his internship ended and he finally gained admission to study Finance at the University of Lagos, he kept working with the comedian. However, they were only seasonal contracts.

“I kept working like that for almost three years and was even doing micro-influencing on social media. But eventually, I just told myself that I couldn’t keep depending on seasonal sources of income,” Akorede said. “I wanted to earn better and have more stability, even though I was still a student. By then (2019), tech was already becoming popular, and I knew I could get the kind of life I wanted in it. I just needed to figure out where I fit in.”

Akorede attempted coding several times, which never resonated with him. But he soon realised that his strength was creativity. The same flair for design that made him choose shoemaking years ago was still in him. “I found out that tech is a field that anyone can thrive as long as they put in the work.” Hence, he decided to become a product designer.

The first thing Akorede did was to search for free courses on Google, which led him to a 3-hour-long Udemy course on UI (user interface) design. “I finished the course that day and loved it,” he said. After that day, he doubled down on a self-taught journey. “Everything you’re looking for is on the internet, and most of it is even free.” he said. “I used YouTube a lot. Google also has a design course on Coursera (which I recommend for newbies). So I didn’t see a need to wait for someone to hold my hands through the process.”

The next challenge, however, was balancing his new-found passion with schoolwork. But in 2020, the lockdowns took that out of the way. “Covid was a blessing in disguise for me because learning and practice became very intense in that period. There was a point when I was constantly in one spot for three weeks. I became engrossed.”

Akorede then started making his learning public through social media, leveraging his experience with micro-influencing. “I started using my Twitter account to share the things I had learnt. In a short while, I started getting engagements on my posts.” Nine months later, his tweets went from attracting an audience to attracting clients. One of the samples that got him his first design gig was a proposed app for music star Davido’s record label.

However, being self-taught came with its challenges. For Akorede, the most dominant challenge was figuring out what to learn. “When you’re self-taught, you might just be learning anything you see on the internet without knowing which one is useful. If I learned under someone, there would have been course guidelines. Also, I believe there are more helpful courses online today than there were when I started learning. Today, if you simply follow the right people on social media, you’ll have a good roadmap for whatever path you want to take in tech. Those people weren’t this many 2-3 years ago.”

Akorede kept talking about his work on social media, and that became his edge. “Many people started knowing me online as a product designer, so whenever they needed one, they reached out.” Between 2020 and now, he has taken contract roles for at least six companies.

Product design is already giving Akorede the life he always dreamt of. “Tech changed my life,” he said. “Last year was a breakout year for me. I started getting so many offers from within and outside Nigeria. I haven’t even graduated from the university (thanks to ASUU), but I have bought my first car and can travel out at will.” He credits a lot of his success to the several events he attended in his early days.

However, Akorede is still exploring possibilities in his field. Last year, he joined the web3 bandwagon, aiming to solve design problems. “Ever since I joined the crypto space, I noticed that many of the apps had poor user interfaces. So I started applying what I know to web3, starting with the Polkadot blockchain.”

I just published a UX case study on Polkaswap, a decentralized finance and exchange platform.

I worked on the responsive redesign and visual improvements of the DeFi and DEX platform.

Nearly one year after that post, Akorede has become an active participant in both web2 and web3 communities. His Twitter audience has grown to over 30,000 people. Now he’s back to the entrepreneur’s league, building a new startup.

“Be open-minded. I can learn from anyone, no matter how old/young they are in this space. Tech is too wide for you to think you can know it all on your own.”