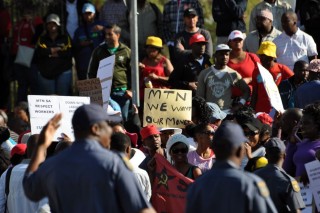 Despite MTN’s attempt at negotiating, the workers strike which began on the 21st of May 2015 in Fairland, Johannesburg, is still ongoing. The striking workers—led by the Communication Workers Union (CWU)—who are demanding a higher pay than the 8 percent pay increase MTN is offering, has forced the multinational telecom to close some of its South African customer help centres.

The failure of the parties to reach an agreement has led to chaos. Reports claim that the street outside MTN’s plush head office near Roodepoort in Johannesburg resembled a war zone on Friday 29th of May, as striking workers burnt tyres and barricaded the entrance. MTN chief human resources officer, Themba Nyathi, said at least four staff members in Polokwane, Limpopo, had to be taken to hospital after they were allegedly attacked by striking staff members.

In the last couple of days, police have reportedly used tear gases and fired rubber bullets at protesters, a development that brings back memories of the grim Marikana massacre, which started as a wildcat strike in South Africa 2012. The Marikana killings were a series of violent incidents between the South African Police Service, Lonmin security and the leadership of the National Union of Mineworkers (NUM) on one side and strikers themselves on the other. It resulted in the deaths of 44 people, 41 of whom were striking mineworkers killed by the police. It also left at least 78 workers injured. It began at the Marikana platinum mine—operated by Lonmin at Nkaneng near Rustenburg—when 3,000 workers walked off the job on August 10, 2012, after Lonmin failed to meet with workers to discuss a wage increase. The following day, NUM leaders allegedly opened fire on striking members who were marching to their offices.

While the MTN chief said in a statement that disciplinary steps will be taken and criminal charges will be laid against employees who are implicated in acts of criminality, the CMU defiantly stated that they will not back down and will defend their rights to ‘violence’. A prolongation of this stand-off could lead to a repetition of the Marikana killings if the situation is not properly controlled.