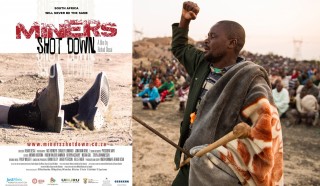 Something good has come out of the unfortunate South African miners’ protest that occurred in 2012. Miners Shot Down, a 2014 documentary based on the miners’ story, has won an International Emmy for Best Documentary. The film was brought to life through eyewitness accounts, incisive interviews and the tireless efforts of Rehad Desai, who produced and directed the documentary.

The South African miners protest labelled the Marikana Massacre started on August 10, 2012 and did not end until September 20, 2012. The unfortunate event garnered a lot of media attention once the South African police opened fire on protesting miners as they took to the streets to demand a wage increase at the Lonmin Platinum mine.

Police brutality was apparent during the incident that left 34 mine workers dead, 78 wounded and more than 250 people arrested. The police later came out defending itself by saying the miners came at them with spears, clubs and machetes, which led them to believe they were in danger.

However, during the 43rd International Emmy Awards, which took place at the New York Hilton in New York City, the documentary, Miners Shot Down, took home the award for best documentary, which is a great achievement for the producers, who want the world to remain aware of the unfortunate incident.

Several people have taken to twitter to celebrate the achievement.

The listed award winning performances according to the Hollywood Reporter, were:

See the documentary trailer below: