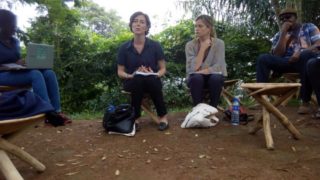 Michela Wrong’s retelling of the untold story of Rwanda

Recent studies show that mainstream media are more effective spreaders of disinformation than fake news websites and social media. This raises questions about the influence of invented facts if the filters ingrained in old school journalism, such as fact-checking and hearing all sides, are abandoned in favour of the more intuitive approach of the post-truth era.

This question is particularly pertinent where the 1994 genocide against the Tutsi in Rwanda is concerned. During the first two decades after the genocide, alternative facts and conspiracy theories were the almost exclusive domain of anti-imperialist activists, elderly catholic missionaries, and members of the former regime, as well as Rwandan Diaspora subcultures linked to them. More recently these previously marginal myths are being fed to a world audience by reputable media like the BBC, Penguin Random House, and The New York Review of Books. This is cause for concern.

The latest contribution to this new tradition is Michela Wrong’s book Do Not Disturb: The Story of a Political Murder and an African Regime Gone Bad. The book relates the turbulent history of the Rwandan Patriotic Front (RPF), the ruling party in Rwanda, from the perspective of former leaders turned militant political rivals. According to the author, the book is meant to lend a voice to “the other side” and reveal what president Paul Kagame keeps hidden, as it were, under the carpet.

Although parts of the book are probably close to the truth and a critical investigation of current politics in Rwanda and the history of its leaders is a legitimate approach for any journalist, the properly researched topics in this book are intertwined with misconceptions that are given the appearance of credible facts but are obviously not. This blend of accurate and false information presents the reader with the problem of having to guess which is which.

In a New Books Network podcast the author explains that in her opinion even myths created around the campfire may reflect a certain kind of reality: “… the fact that something may not be rooted in actual facts in a way does not mean it’s not true.” For readers less inclined to disconnect ‘facts’ from ‘truth’, the danger is that the book might be mistaken for a historically accurate or balanced account of recent Rwandan history.

Such misapprehension has resulted in a series of rave reviews in prominent magazines and newspapers praising Wrong for her “meticulous research”. In her review, academic Susan Thomson describes the book as “a masterclass of investigative journalism.” To her credit, Wrong dispels that illusion. To Daniel Flitton of The Interpreter, she reportedly declared that she had “… deliberately eschewed the type of journalism that relies on gathering evidence, putting the allegations [to the people concerned] and presenting both sides, believing the Rwandan state has had plenty of opportunities to amplify its message.”

Be that as it may, relaying an unverified history as narrated by disgruntled former RPF officers in exile is one thing, provided Wrong is frank about it, but this covers only 60 % of the book. The remaining 200 pages recycle myths that those familiar with the field have grown accustomed to from shadow literature produced by a more sinister category of dissidents. One of the more distasteful examples re-labels the thousands of genocide victims whose bodies floated down the rivers to Lake Victoria as Hutus killed by the RPF, which recycles a propaganda message broadcast repeatedly by the Rwandan hate radio stations during the genocide. All in all, Wrong’s intuitive methods prove highly vulnerable to the power of suggestion.

2014 was a turning point in the mainstream media’s framing of the genocide against the Tutsi. This was the year the BBC aired the controversial documentary “Rwanda’s Untold Story”. Apparently using the film as her blueprint, the topics in Do Not Disturb are largely the same, so too are the key informants and their arguments. Most importantly, both the BBC program and Wrong’s book are characterised by the omission of essential documentary evidence vital to make sense of the subject matter.

It’s beyond the scope of this blogpost to name and analyse every relevant piece of evidence overlooked by Wrong and the BBC, or the misconceptions born out of this negligence, but it’s worth examining one topic that’s been a cause of polarisation among journalists and scholars for many years: the rocket attack against president Habyarimana’s aircraft on the evening of 6 April 1994, an event used by Hutu Power extremists as a pretext to seize control of the Rwandan government, kill Hutu political moderates, and start to exterminate the Tutsi minority.

After the rocket attack, two theories prevailed. The first was that the Presidential Guard (PG) under the direction of Colonel Theoneste Bagosora had staged a coup d’état to prevent implementation of the Arusha Peace Accords signed by the Habyarimana government and the RPF (as part of this, the PG was going to be dissolved). The second theory was that the RPF had attacked the plane to re-ignite the civil war and force its way to power by military means since they feared losing the planned future elections agreed under the Arusha Accords.

Wrong doesn’t discuss the first option and dismisses another explanation in which Habyarimana’s widow was behind the assassination. This omission leaves the RPF exposed as the prime suspects. In her book, Wrong uses the same informants and documents as the BBC documentary, including several RPF dissidents who are presented as witnesses but reject any personal involvement in the planning and execution of the attack. They merely recycle arguments from a redundant whodunnit-debate that used to focus on the question from which location the assassins had fired the missiles.

Before 2012, some observers thought the missiles were fired from the Kanombe military camp, where the PG were stationed, while others, like the dissidents, claimed the crime scene was “La Ferme”, a spot in the valley below Masaka hill. Belgian scholar Filip Reyntjens describes the significance of that debate as follows: “The importance of identifying the firing zone is considerable because it is unlikely that the RPF would have carried out the attack from the military domain or its immediate surroundings, but it could have accessed the area of Masaka.”

Not mentioned by Wrong and the BBC is that the matter of the shooters’ location was settled a decade ago by an independent on-site forensic investigation. In 2010, French judges Nathalie Poux and Marc Trévidic received permission to investigate the crash site in Kigali. They brought along a multidisciplinary team of specialised scientists who inspected the wreckage, established the lines of sight of eyewitnesses, and examined six firing zones that were mentioned in the various witness accounts, including La Ferme and Kanombe. Their findings were published in 2012, in a 338-page technical report. Because many scholars and journalists are not scientists, I’ve visualised the relevant information in Figure 1, using coordinates mentioned in the report.

The scientists first determined the plane’s position in the air when it was hit by a missile, and the part of the plane that was hit: the underside of the left-wing. Their inspection of the damage revealed that the missile that hit the plane (another one had missed) had ruptured a fuel tank which caused the kerosene to escape and explode in mid-air. The damage to the wing then caused the plane to crash. This information, combined with other data they collected, led the scientists to conclude that the firing zone could not have been in the Masaka area as the RPF dissidents suggest. I’ll briefly explain the main arguments behind this conclusion:

The fact that the left wing was hit from below limits the area from where the missiles were fired to a left-front angle. La Ferme was located outside this area, to a left-rear angle. If the missiles were shot from La Ferme, they would have approached the airplane from behind, guided by their infra-red sensors to the engines attached to the tail, diagonally above the wings. The wreckage showed no missile damage to these parts of the plane and a miss would not have hit the underside of the wing.

The second reason was the distance to a group of Belgian doctors and a French officer in Kanombe, who heard the missile shots a few seconds before they saw the light of the fuel explosion. These facts limit the radius within which the shots were fired. La Ferme was more than 2 ½ kilometres away, far outside this radius. The sounds of shots from that area would have reached the ears of the witnesses after they saw the explosion, not before.

The third reason was the direction of the missiles as observed by the doctors in Kanombe. Through a window of the residence of surgeon Massimo Pasuch and his wife Brigitte, looking in the direction of Masaka, they saw bright missile trails going from right to left. Although they were looking in the Masaka direction, La Ferme was hidden from their view in the valley, a hundred meters below their position. The doctors could not have seen the trails of a missile from La Ferme until it rose up from the valley, which would have been to their left (indicated in blue in Fig. 1).

There were several other facts leading to the same conclusion. While none of the evidence supported La Ferme as the crime scene, it does fit an area in the eastern part of the Kanombe military camp. The scientists concluded that the shots must have been fired from an area of about 2.6 hectares east and south of locations 2 and 6, provided there was a clear view towards the approaching plane. In 1994 this zone was partially covered by a woodlot which further limits the shooting zone to an area of about 1.5 hectares (in Fig. 1, this zone is indicated in green).

Critics like Barrie Collins and Filip Reyntjens have argued that the results produced by the acoustics expert are unreliable because the circumstances at the test location in France deviated from those in Rwanda. But when I asked Reyntjens to indicate how much it affected the sound velocity, he admitted that he lacks the technical expertise to answer that question. Another point of critical importance concerns the possibility of evasive manoeuvres by the pilots, but none of the eyewitnesses has mentioned the type of aerobatics necessary for linking the wing damage to a La Ferme-missile. Moreover, in that scenario, the plane would not have crashed where it did.

These results do not entirely rule out the RPF as suspects, but no theory has been suggested in which they infiltrated their enemy’s military domain, waited for the plane to arrive, shot it down, and escaped without being spotted. On the other hand, the fact that the firing zone was a short stroll from the Kanombe barracks, warrants a more critical look at other scenarios and suspects. Unfortunately, Wrong’s ‘intuitive method’ left no room for reading the scientific report and then discussing it in her book, let alone confronting her informants with it.

Unfortunately, there are dozens of examples of such poorly researched topics in Do Not Disturb. Several hair-raising mistakes could have been prevented simply by looking at the map. Usually, scholars and journalists who dismiss scientific facts without a proper refutation, while clinging to unrealistic theories because it’s their belief, are viewed as having entered the realm of pseudo-science. It’s a mystery why this behaviour is deemed acceptable, even encouraged, in the context of Rwanda and the genocide against the Tutsi.

Considering that the public has a right to accurate information, the editors of mainstream media outlets and academic journals, persuaded to publish fringe theories because they come wrapped in a compelling, well-written story, should do a better job upholding the ethical standards of the trade and prevent gross errors and disinformation from taking on the appearance of credible facts. A good story is not necessarily an accurate story.

Written by Jos van Oijen. Oijen is an independent researcher from The Netherlands who publishes genocide-related issues in various online and print media.