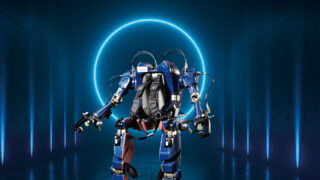 Nigeria is undeniably a talent hub, and this is partly because of its demographic strength. It has become increasingly common in recent years to see child prodigies create mind-blowing innovations and accomplish notable feats across all human endeavours. For instance, 12-year-old programmer Joshua Agboola, 16-year-old developer John Oseni, and 19-year-old blockchain expert Emmanuel Njoku are young waves of the decade building a future in technology.

Adding to this list is 19-year-old Joshua Olaiya, a young autodidact robotics engineer with a passion and interest in embedded systems, the Internet of Things (IoT), and drones. Not many are like him because hardware engineering, unlike software engineering, requires additional effort and creativity with the hands and not just the brain. Olaiya caught my attention on LinkedIn with a post about a hand gesture robot he made, so I decided to reach out and converse with this young genius.

Olaiya was born and raised in Lagos, Nigeria. He has always been passionate about technology ever since he was young, and his innovative instinct coupled with his inquisitive nature makes him repair random faulty electronics in his house. His interest in robotics sharpened as he grew, so he researched a robotics institution that could provide him with the right resources to refine this innate innovative prowess and came across the Robotics and Artificial Intelligence Nigeria (RAIN). The institution affords people to take an intensive course in Robot Development and Automation, as well as in Artificial Intelligence and Machine Learning.

A nine-month course at RAIN costs N1,500,000 Naira only, while short courses cost N750, 000 only. Olaiya could not afford either, but that didn’t stop him. Instead, he embarked on a self-taught journey to achieve his dreams. “Their fee was so expensive. My mother, the sole provider for our family, does not earn that much money. I then made the decision to be self-taught and self-sponsored,” he said. Olaiya began his robotics career as a self-taught programmer at the age of thirteen by watching YouTube videos. With so much quotidian practice that sometimes exceeded 20 hours, he began to perfect his coding skills.

Olaiya has now been in the robotics space for six years, and his mastery has made him a LinkedIn influencer with close to 20,000 followers. Keeping people abreast of his problem-solving innovations on social media has gotten him mentorship opportunities, support for continuous development, and fame as a young tech influencer to inspire a generation of young innovators.

His works have received recognition from top influencers such as Agon Hare of Project Nightfall and renowned YouTubers and bloggers, Whatsup Tony. Their consistent interaction with his posts increases the visibility of his works. Prominent Hollywood actor Dwayne Johnson (The Rock) and Richard Browning, the inventor of a “jet suit”, have also acknowledged him.

Olaiya has many impressive robotic projects to his name. His first was an autonomous electric vehicle. He argues that human error causes avoidable accidents. “I believe vehicles using artificial intelligence or machine learning would solve that problem. That was why I decided to build it. It moves by itself and swerves whenever it sees an obstacle,” he explained.

Another project of his is a hand gesture robot he spent almost a year building. This project shot him into the limelight; media stations and publishers told the story of the young genius. “It is one of the most complex innovations I have ever built. The innovation took nearly a year of research to build. It is a wirelessly controlled robot that will be useful for many applications like remote surveillance. The hand gesture robot can help physically challenged people. I believe this innovation can eliminate a lot of manual labour and make life easier for those who are not as fortunate as the rest of us,” he said.

Olaiya’s sound switch project is fascinating as well. The switch activates upon two-clap sounds and stays activated until another sound triggers the circuit. His cargo mobility robot was created to follow the path human takes. According to him, this robot can be used in industries to transport heavy loads.

Olaiya also has a drone project aimed at boosting productivity in agriculture. The use of drones for agriculture is new and evolving in Africa. Drones help with land mapping, reporting crop health, soil analyses, etcetera. Olaiya understands these functions and has raised the bar by working on a distinctive feature. According to him, his drone would convert air to water while in operation, so farmers won’t have to dock drones to refill them with water. “As the drone flies, it converts air to water. It will improve time, reliability, and productivity,” he stated.

Building hardware is not an easy feat anywhere in the world, but it is even more difficult for a Nigerian with many socioeconomic hurdles. The first challenge is irregular power. Lack of energy cripples creativity and research. Some of the robots Olaiya makes need to be charged to perform optimally, but the prevalent erratic power supply in the country disrupts this. Similarly, data costs and a lack of fast, reliable internet can be stifling. The kind of projects Olaiya embarks on often require extensive, data-draining research. Online learning and creating codes for robots often require bulk data subscriptions which he strives to provide himself.

Another significant challenge for Olaiya is sourcing materials. Although he builds from scratch, he still needs to source certain materials that are not available in the country. His go-to source is Ali Express. These materials are extremely expensive. The naira’s volatility exacerbates the situation. “I get some materials from AliExpress, which are always expensive depending on the project. I can spend up to N100,000 for some projects, and for the drone I built, I have spent almost N200,000,” he explained.

Despite these odds, Olaiya still has lofty dreams to obtain a fully-funded scholarship to study at one of the top leading engineering institutions in the world like MIT, Oxford, Harvard, Stanford, Imperial College, Cambridge or any of the Ivy League schools. Currently, Olaiya is in a virtual boot camp entrepreneur programme at Oxford University, United Kingdom.

In the future, he hopes to launch a company whose mission is to create a more sustainable world. He also intends to partner with big tech companies to try and make the world a better place for everyone. His advice to youngsters with his kind of talent is to be relentless even when they fail. “Robotics is a very vast field. It requires a lot of potential and readiness to learn. It is a complex field whereby people try and solve problems and fail. The more you learn, the less your likelihood of failing. Teaming up with colleagues is also nice, but I hardly find people like me. Just get started, and things will fall in place,” Olaiya said.