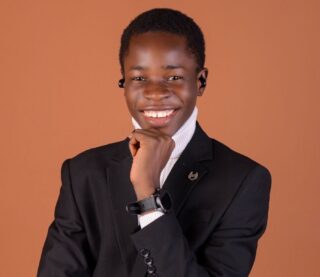 “The future is nature-powered,” is 16-year-old developer John Oseni’s sentiment. At first sight, John looks like a regular teenager. His appearance is quite simple, and like most tech bros, he relishes a comfortable hoodie and slides. Maybe the intensity of being a tech bro makes fashion the least of your worries — Meta CEO Mark Zuckerberg and Jack Dorsey have shown us that. But looks are not the only thing John shares with the big names in the tech space.

John is a man of different interests. His official bio states that he’s a blockchain and full-stack developer. But he is also neck-deep in causing a change through technology.

Growing up in Akure, Ondo State, John did not initially have any lofty dreams. “I did not want to be a doctor or any other careers children dream about. I just wanted to play with tyres,” he says. His first exposure to tech came when he was 14 years old. Akure-based tech hub, Green Garage visited his school to teach the students about computers. “It was basic hardware knowledge. But I became interested,” says John. The organizers then held a competition, and John emerged co-winner with another female student. The programme might have only given basic knowledge, but it marked the beginning of John’s journey to becoming a prodigy.

A few weeks after his first experience, John could only think of the new world he had learned. Basic knowledge was not going to cut it. But his resources were limited — he was a young lad with no phone or access to the internet.

His first thought was to go to the same people who had introduced him to computers. “They had not given us the prize money for the competition. So I went there to request for it,” he says. But the organizers offered him one week of free lessons in exchange for his initial promised prize. “My parents were not happy that I was going out of the house every day like that. They tried to stop me. They were constantly complaining. But I kept running back,” After the week was up, he was required to pay the sum of N150,000 to continue his classes. “First, my parents were not financially buoyant. Also, during the first week, I could barely make it out of the house. How do I tell them I need N150,000 to continue something they were not in tune with?” he says. So 14-year-old John offered to clean the building in exchange for coding classes.

It seemed like the perfect arrangement until he realized he was missing an essential learning tool. “I had no laptop. So I had to borrow laptops from other people,” he recalls. “I would also ask people if I can use their internet connection for five minutes. Those five minutes would end up being 2 hours.” At this point, one of the people he worked for gave him a 4GB RAM laptop that he could use.

John’s first job was to develop a website. While it was a decent experience, he got paid only N10,000. “At the time, it felt like so much money,” he says. Later, John joined GitHub, a software development contributor platform. He became the youngest blockchain developer on the website. He got to work on different projects, including Ethereum Smart contract version 2. “At a point, many people were asking about me. Blockchain was the newest technology, and I was the youngest blockchain developer,” he says. Shortly after, John worked on different projects, getting paid in crypto. He went on to make his first million naira at 15.

John still had to finish secondary school. But while his mates were trying to catch up on the school work they had missed due to the pandemic, John was combining jobs with his WAEC exams. In a typical Nigerian household, this would not suffice for the parents. They wanted him to focus on his exams. So, they seized his laptop. “I had some projects to finish up, so I bought a MacBook 2014. It was the first laptop I bought myself. I wanted to prove to my parents that I could code and study simultaneously,” he says. John’s attempt at proving his parents wrong was successful. In 2021, he received his Waec result with 7 As. John went on to build his school’s result-checking web page. “I volunteered to work on it, but I got compensated more than I expected,” he says.

Last year, John Oseni became the first Nigerian to be listed on Global child prodigy top 100 prodigies. “They reached out to me after he had seen a post I made on social media about my work,” he recalls. “The process was quite simple,” he says. I had a face-to-face interview with the founder. Then he asked to see the works I had done.” John was then listed as a global child prodigy under the technology category.

John might be a prodigy, but he has had to prove himself every time. “When I started, I would learn different programming languages simultaneously. My mentors in the tech space told me it was not possible to learn everything at once. They did not give me any projects to carry out. Whenever I showed them what I was working on, they would laugh at it. So I had to go out and work other jobs. When they realized I could deliver on these jobs, they started offering me projects to work on.”

Then five months after he got his first laptop, he found himself in an unexpected situation. One of his mentors at the hub started telling people John was a fraudster. “I was working on some confidential projects. And because I could not share the details, he said I was doing fraud. The big problem came when he told my parents. Thankfully, my parents saw that this was not the case. And he(the mentor) ended up apologizing. I forgave him, but it affected how I trust people,” says John.

A Nature-powered future: The start of something green.

John is a firm believer in African tech changing the world. Although he started his career in software technology, he quickly became interested in the possibilities beyond software development. In 2021, John founded UltereX (previously called FutureX), a nature-powered tech company. The plan is to use the planet’s energy to power existing and future technology. UltereX plans to produce gadgets and transport systems that run on air, water, solar, and other naturally abundant elements to drastically reduce the global carbon footprint and ensure a greener, more sustainable planet.

“We believe that the future of technology is sustainability. We are designing an ecosystem that promotes sustainability in never-imagined ways,” says John. “Currently, it seems everybody is engrossed in building software applications. Fintechs are springing up everywhere. But tech is beyond that,” he adds.

Although UltereX is yet to fully start operations, according to the young CEO, the company is already attracting investors from far and wide.

The life of a multitasking tech prodigy

John is the blockchain lead developer for several crypto companies, including Fly wallet and Italian-based company, Cryptonite. “Someone recommended me to them. After a few interviews, I got hired as the blockchain team lead,” he says. “Most of my Jobs have been on recommendations,” he adds. He recently joined the US-based cryptocurrency team, Eastcoin as a blockchain developer.

John’s achievements have made him influential. Last year, John got invited to speak to some students about tech. “It was a boys’ school in Ibadan. The school principal was worried about the boys acting up and not putting their energy to good use. The idea was that if someone their age spoke to them, they would listen. I still mentor some of the boys. I even pay for resources to help them learn,” he says.

John has grown so much he holds mentorship classes now and then. But this self-taught tech bro has other plans for conventional education. “I would probably learn something like cooking. I am terrible at that. But whatever I decide to further my education, it will be in something I do not know of,” he says. John is also working on four coding books he plans to release before the end of the year. While all these might seem like a lot for a young lad to handle, John enjoys multitasking. He works 17 part-time jobs with roles ranging from software developer to blockchain lead. “I used to work 22 jobs, but I had to drop some so I can focus on building my company,” he says.

John’s tech journey is one in many African teens currently exploring the possibilities of tech. In 2021, 19-year-old tech lad Njoku Emmanuel’s company, LazerPay, a cryptocurrency payment platform. Lazerpay has since raised 1.3 million dollars to be the stripe of Africa. “It first hit me the impact I had when I got a LinkedIn account, and my followers increased in months. Also when I attended OCTAfest for the first time, I was surprised people could recognize me even with a mask on,” John says. African teens like John Oseni and Emmanuel Njoku are poised to be household names, influencing a new career choice for many young Africans.

John does not take the opportunities he has for granted. His constant appreciation posts on social media and dedication to his work show this. “To be honest, I do not know how I learn. My brain would just catch up on things,” he says. “I collected jobs without knowing how to work on them. A lot of the learning came on the job. Because I was eager to learn, I took on many jobs without collecting payment. I would only ask for data money. I would spend the money on myself and go back to begging for data. Now I am getting paid for doing what I love.”