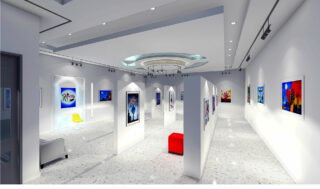 My first encounter with Foluke Michael was at the British Residence, where the Deputy High Commission Lagos and the Sterling One Foundation hosted the media, stakeholders and high-level climate social investors to a media dialogue in commemoration of International Day for Climate Action. “My name is Foluke Michael. I am a disruptive innovator, a lover of the earth, and I believe that a green world is possible,” she introduced herself.

Foluke Michael is a leading Nigerian climate activist and CEO/Project Director of Solution17Green for Climate Action and the Creative Youth Community Development Initiative (CYCDI). She was the 2018 global winner of the United Nations SDG Action Award (Innovators category) for her efforts to promote action on sustainable development goals.

Through Solution17Green, she is racing against 2030 to plant 10 million trees across selected schools in Nigeria while leveraging strategic partnerships. “We are planting economic and sustainable trees across Lagos State in partnership with the Lagos State government. We launched our pilot project with a total of 40 schools. So far, we have successfully planted trees in 10 of them,” she explained. Economic trees, especially the ones that fruit or are medicinal, help to create jobs and lift many households out of poverty.

Foluke employs a depth of economics and continuity with climate activism. In January 2020, she began a climate action campaign called Solution17 for Climate Action in Africa (CAA). She designed Solution17 CAA to inspire creativity among young people to build a desirable and sustainable future through climate enterprises. Later, in September 2020, Amina Mohammed, the UN Deputy Secretary-General, officially launched the campaign.

At the core of this project lies the vision to promote the natural environment, raise more green entrepreneurs and accelerate prosperity in different communities. “We have found that most of the trees planted 10 years ago are no more,” she pointed. “So, we decided to do things differently. For each school, we are planting 50 economic trees and raising 50 eco-champions. We train these young catalysts to co-create solutions for our numerous problems around the 17 sustainable development goals,” she added.

Foluke is heavy on partnerships. In 2021, Solution17 CAA scaled to Naija Climate Now with the support of the German Consulate, United Nations Information Centre for Nigeria and Sterling Bank Plc to develop solutions to climate adaptation, green economic recovery, and low-carbon development for Nigeria.

Foluke is an optimist who has developed a solution mindset in challenges. For her, the world is at a phase where people should convert problems into solutions. “Managing people, paying salaries and raising funds used to be a challenge. But I chose not to pay attention to these problems. Instead, I started multi-tasking to fill in as many roles as necessary,” she said.

Foluke recently launched the Just Act publication series and the Just Act movie focused on climate change. She also launched an anti-corruption initiative called the Creative Youth Initiative Against Corruption (CYIAC) which seeks to curb corruption and promote a culture of ‘Integrity’ through educational and creative development in children and youth. The goal is to build desirable communities through sustainable creative development in young people. Her anti-corruption educational materials, CYIAC Corruption Busters, have been published by UNODC’s Education for Justice #SDG16 for Global Dissemination.

What you should know about climate change

The negative impact of climate change is fast hitting the global economy. Just as there is no smoke without fire, climate change did not start by itself. Human activities are at the core of it.

As efforts to combat climate change fall short, increasing threats to basic essentials of living – clean air, safe drinking water, safe shelters and adequate food supply – abound. According to the World Health Organisation (WHO), the annual cost of climate change is approximately 250 000 additional deaths from malnutrition, malaria, diarrhoea and heat stress between 2030 to 2050.

The international organisation further estimated the direct damage costs of climate change to human health to be between $2 million to $4 million annually by 2030. If adequate measures are not adopted, underdeveloped and developing countries will be the hardest hit. That is why Foluke Michael is accelerating climate causes in Nigeria.