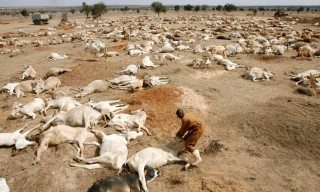 With over 2 million people at risk of starvation, Kenya is nearing one of the worst famines in its history

The 2016 prediction of acute famine in some parts of Africa appears to be knocking the door of reality as a number of African countries are presently facing food shortages. The prolonged drought in East Africa, which has been on for over two years, is leaving Kenya at the edge of one of the worst famines in its history.

With the continuous death of humans and livestock, reports from the United Nations have indicated that more than half of the population of Kenya now stands at risk of acute starvation in coming months. The drought, which has resulted in an untold number of famine-related deaths since it started in 2014, has bloated the number of Kenyans living under severe food insecurity and needing serious medical attention to about 1.3 million.  The worsening situation has forced the Kenyan Red Cross to resort to giving out cash in order to mitigate the effect on about 340,000 people that are in dire need.  In addition, the United Nation Food and Agriculture Organisation has released $400,000 to be spent in Kenya on training, vaccination, animal feed and encouraging people to sell animals before they fall sick.

In some parts of Kenya, shepherds have lost between 60 and 70 percent of their livestock in the last couple of years. In some other parts, to keep their livestock alive, the farmers divide the money received from aid agencies, with a part going to the sustenance of their livestock, while the other part is used for the upkeep of the family. The drought is most felt by livestock farmers.

The farmers, as in previous years, are hopeful the rain will come soon. However, a report from the meteorological department has dashed the hope of the farmers as they are enjoined not to expect rain anytime soon. At best, according to the UN, this year’s rain, expected between March and May, would be as poor as previous years.

The United Nations has also indicated that Somalia may be on the verge of its second major famine in six years. The number of drought-related deaths has increased recently, with the number of people in need of food aid rising to 6.2 million from 5 million in September 2016. The reports also have it that some 363,000 children are suffering from acute malnourishment. The first drought in 2011 claimed the lives of some 260,000 people, with half of the deaths coming before the official declaration of famine.